Intro:
The short version-
Started scanning 3,000+ b/w pictures, film and color slides from my tours of duty in the Army. Never before shared.
Gonna take some time.
Plan to share photos each blog starting this weeks post.
Daily times of my life as I lived them are in these photos. Nineteen, twenty and twenty-one years old.
Was a combat helicopter pilot two tours, 1966-67 - A Btry, 2D Bn, 20th Arty, 3rd Plt, 1st Cav Div (Air); 1969 -C Trp 7/17th Cav
Flew both a Huey UH-1B/C and the Huey COBRA AH-1G for a combined 997 combat missions.
Had my camera with me all of the time. Have always enjoyed photography.
Loved the flying.  We flew into gunfights every day and did it for the guys on the ground. So all of us to come home safely. Nothing more, nothing less. We were  men and women doing what had to be done given the times of our lives. Like it or not.
Maybe a story or two along the way here.
Some photos with captions as best as I can remember. It's been awhile. 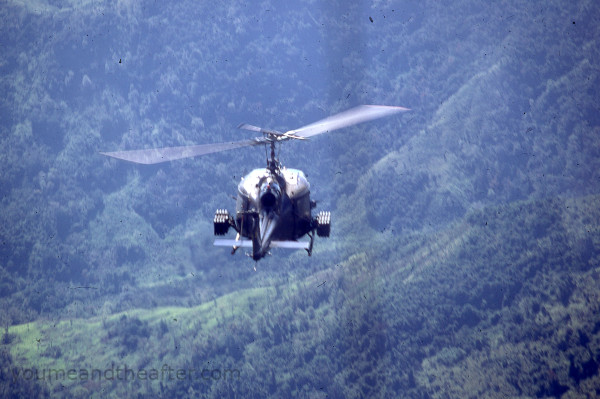 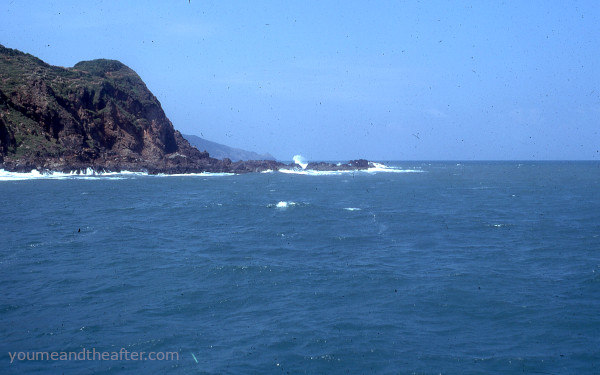 Returning to base, low-level along the coast. Memorable photo in that our flight of two had just escaped flying into a B-52 strike in the same area inland that we were assigned a fire mission. We were luckily on the edge of the strike with bombs falling along side of us and exploding a few hundred feet below us.
All hell instantly erupted around and we tucked our tails between our legs and turned for the coast. We were running as fast as those Huey's could fly.
Mission de-brief was an "oops from the Air Force." Did not share that morning B-52 strike plan with us. Pucker factor is a real thing!! 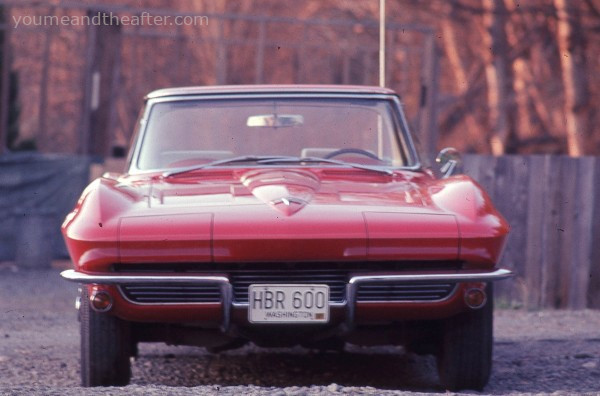 Bought this near Ft. Rucker during our final stages of flight training. Mindsets amongst some of the cadets were that we all knew we were going to Vietnam. We did not know whether we would return. So, why not?
I remember one candidate bought a new Mustang Shelby Cobra fastback off the showroom floor. White with blue stripe. I thought him a fool because he could have had his picks of any Corvette made. What a fool I was, huh?
I left the car with my dad and mom and they cruised this up and down the Washington State coastline while I was gone during my first tour of duty. Good for them.
Given all the heartache sending their son to Vietnam, they told me they would take care of it for. Probably would not be driving it much. Come to find out they quickly adjusted that mind set. 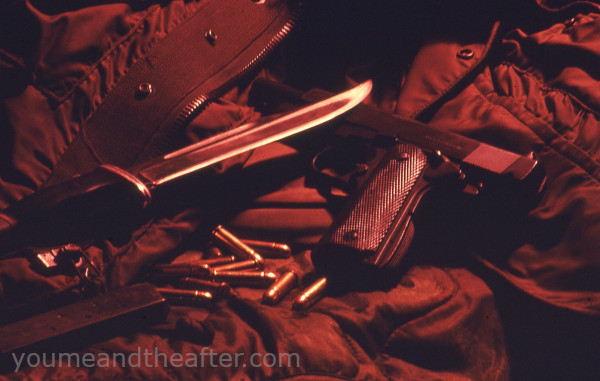 EDC included a gunship strapped on my back, flack vest, survival knife my father gave me and an Army issued .45.
My father handed me this knife while my mother was not looking the day I left from McChord AFB for Vietnam. He tucked it into my hands and while holding me whispered in my ear, "Do what ever you have to son to come back to us safe and sound." A father's permission. Mom never ever knew. My fathers eyes were red, but he never cried in front of me that day. 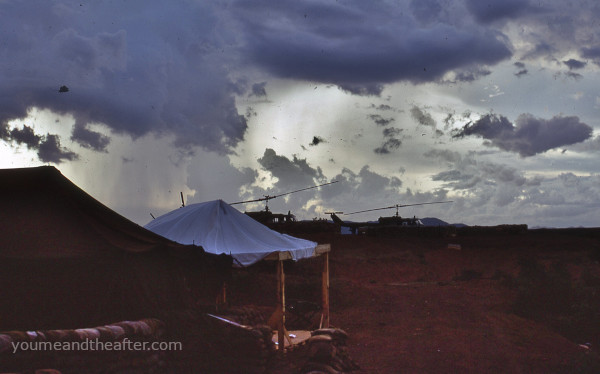 Weather never stopped us from flying. 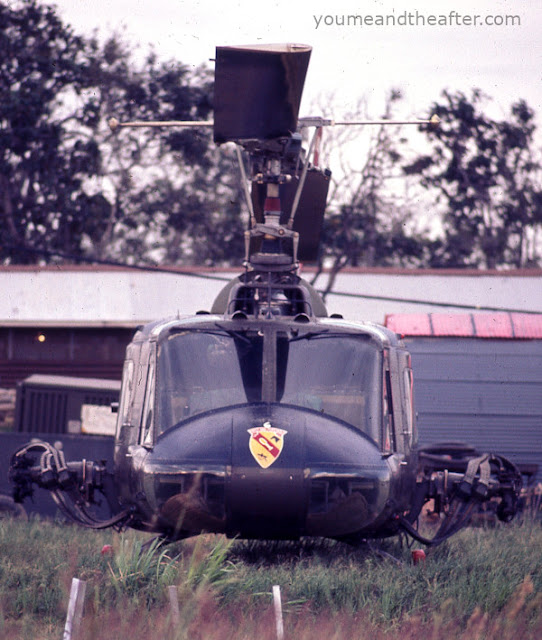 Gunship outfitted with 4 M-60 machine guns, two hard-mounted either side of the helicopter. I believe this is a C-model UH1. Wider rotor blades. 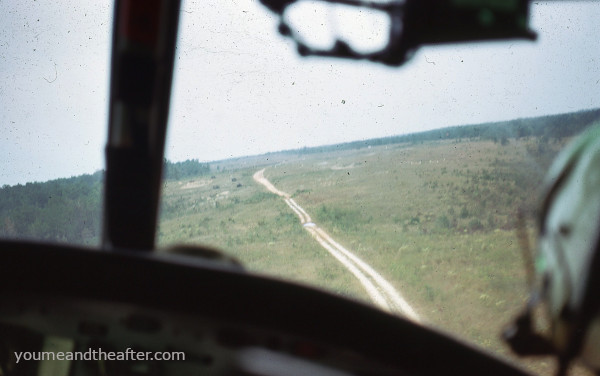 Low level flying north out of An Khe, Central Highlands. 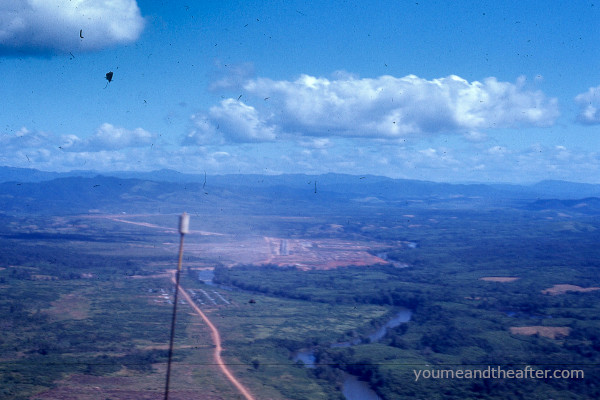 LZ Two Bits and LZ Hammond in the distance; south of the An Lao Valley and looking east. Central Highlands. 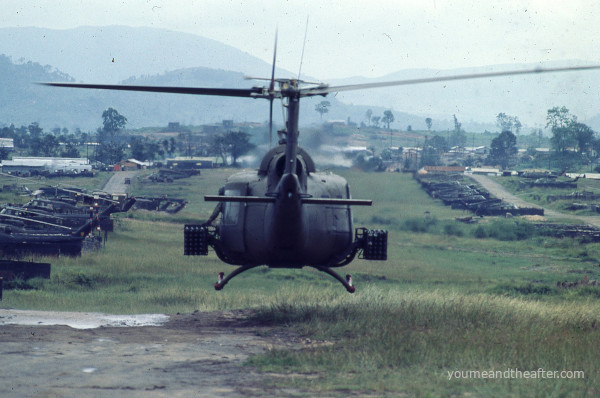 "The Golf Course", An Khe, Central Highlands. Taking off down hill and as soon as the helicopter reached translational lift, it would rise noticeably into the air. Loved watching these fully loaded helicopters take off. The Chinook helicopter was one hell of a work horse and rescue helicopter of that era. I enjoyed watching them work.
I had two cameras during this first tour. Both Pentax, I think. I lost the first one on a bus while on R n R in Hong Kong. Just got up and forgot the damn camera.
When I remembered, the bus was on the other side of a most congested road and there was no way I could ever stop the bus and get it back. Broke my heart, but camera stores were one of the reasons I went there for R n R. (Nope, did not do that!) For the life of me I cannot remember the camera I replaced that first one with.
I have not taken the time to clean these photos of the junk on the lens or mirror. I did not know of this problem till I got home. And now, it really does not matter. Those cameras were also real work horses when I look back on the environments they were in. Sitting on helicopter floors next to a pilot seat.
...........
4 MINUTE TIME LAPSE VIDEO OF PORCH ROOF BUILD 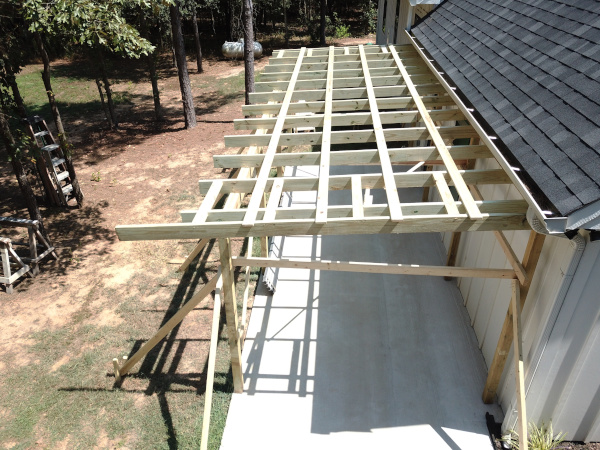 Testing out the new (old) GoPro and learning time-lapse photography.
................
October already. How did this happen? Will there be a "surprise" this month?
Let's end this weeks post with some music. I have shared before, but go back to this kid playing guitar quite often. Makes this look so easy. So easy!!!
Miguel Montalban. Enjoy
Yep, thanks for the visit this week.