Thankyou "Irish" for sharing on your blog site. 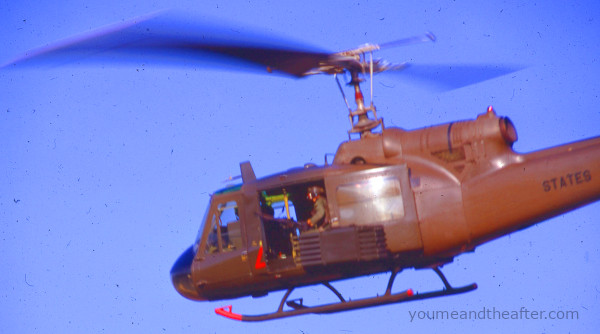 Scanned over 600 color slides these past weeks of those years of my life has been a "box of chocolates" indeed. The slides I have started scanning are the ones that were set aside and have not been looked at in decades

Vietnam veterans; we are the old guard now. I am 76 and I best to doing things like this and sharing before it is too late. Dust in the wind and all of that.

Share, if you will, these photos with any veterans you know. I think they will enjoy seeing what some of today's “old guard” were experiencing on their tours of duty some 55 years ago. 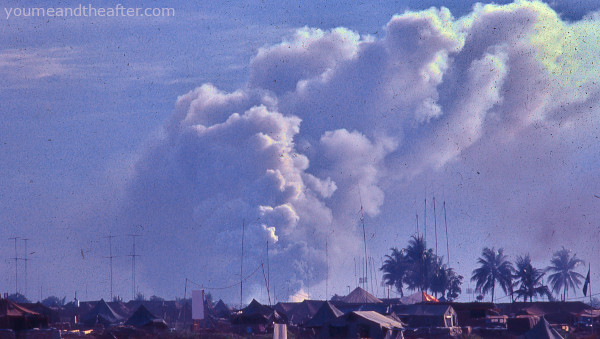 LZ Hammond on fire.
This was a sister LZ to Two Bits, Central Highlands. That LZ had a small medivac hospital but was the major fuel dump reserved for that AO (area of operation). A Viet Cong Sapper infiltrated that compound at night and threw in a Satchel charge bomb onto one of the fuel bladders. 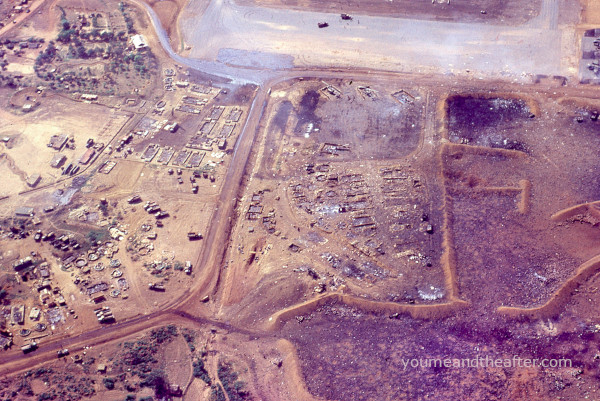 LZ Hammond after the sapper attack. Fuel dump and medivac facilities all destroyed. Photo was taken a few days later after the smoke had cleared. 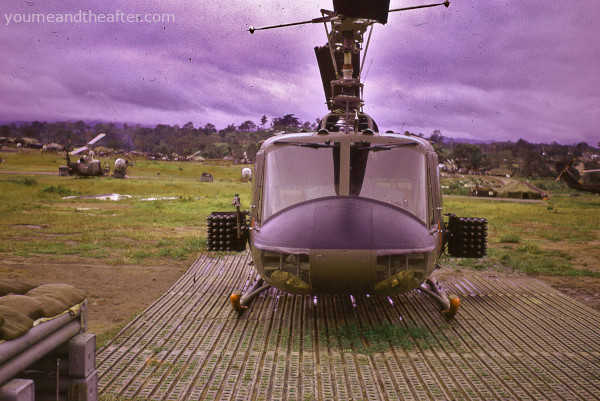 This was us.  Areal Artillery. Armed with 48 rockets and two door gunners. Always flew in teams of two. 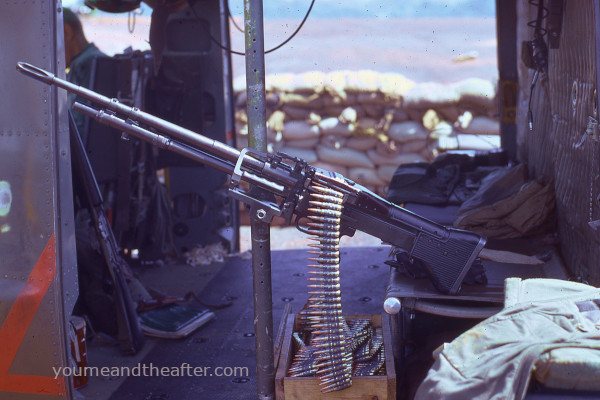 Typical door gun mounted on a vertical pole. Note: side of helicopter was what prevented the gun from coming into the cockpit. Some early M60's were mounted on bungee cords supporting the weight of the gun.
The young door gunners and crew chiefs, just out of high school, who were running these guns and maintaining these helicopters, were hell on wheels. These kids were ground zero for the overall success of all the work the helicopters did during that war.
We all held these kids in the highest regard!! To this day!! 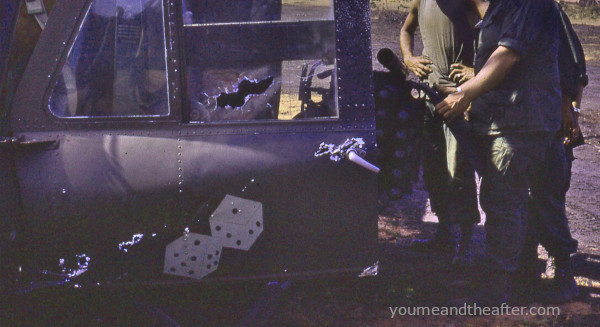 Door Gunner Shoots pilots helicopter door handle.
A close friend and his team were on a mission just outside Phan Thiet, March or so of 1967. We heard the radio come alive with "Taking fire, I am hit, etc." That sent us all to the flight line, fired up our helicopters and were quickly pulled to a hover and took off to his location. A call of taking fire on any mission was serious shit.
The door gunner brought his gun too close to the side of the helicopter and shot the door handle and the pilot's door opened.  The M-60 was then firing on the inside of the door with rounds ricocheting off of the armor plating or exiting out through the partially opened door. The shrapnel was hitting the pilot in the leg.  Thus, "taking fire."
At that moment in time, the pilot did not know it was from his door gunner.
Later that day, my friend returned from the doctor, leg covered in red iodine. Lots of little black specs on his leg. He spent the next few weeks with tweezers pulling  imbedded shrapnel from his leg.
Instead of sitting down and taking it easy, he picked up a cold bottle of Coke and headed to the flight line and his door gunner. We asked him what he was doing.
"I bet my door gunner a coke that his gun would jam on this mission. The gun did not jam so I am paying off my bet!"
He refused a Purple Heart for this mission experience. 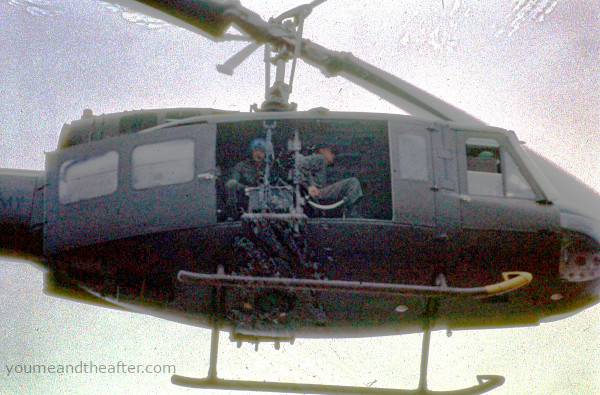 Another door gunner pic on one of the troop lift helicopters. 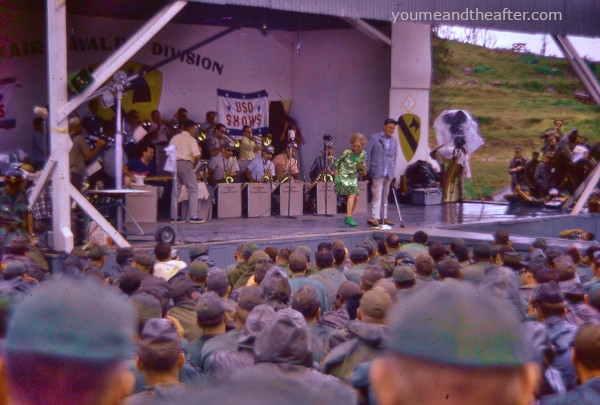 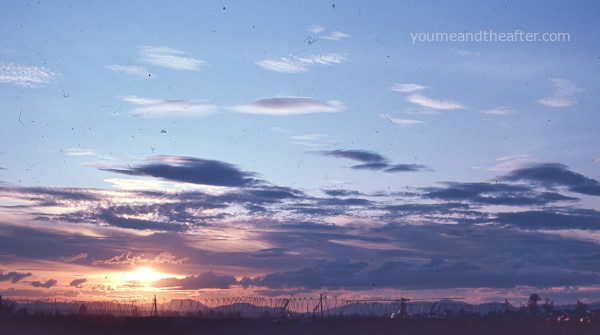 Some of the grandest sun sets I have ever seen in my life time were there in the Central Highlands of Vietnam. 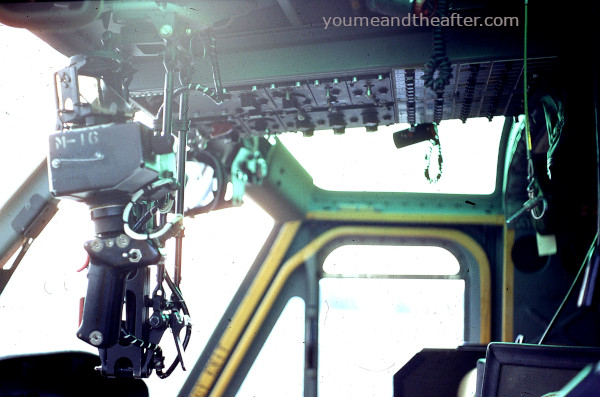 Gunsight for the M-60 machine gun configuration on the Huey Gun Ship.
Twin guns on either side and they would slew up and down and side to side using the hand grip and sight pictured here. 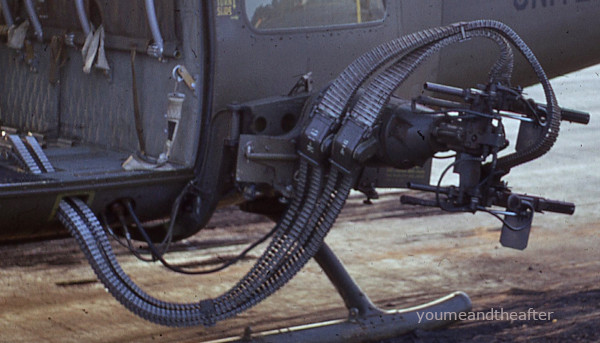 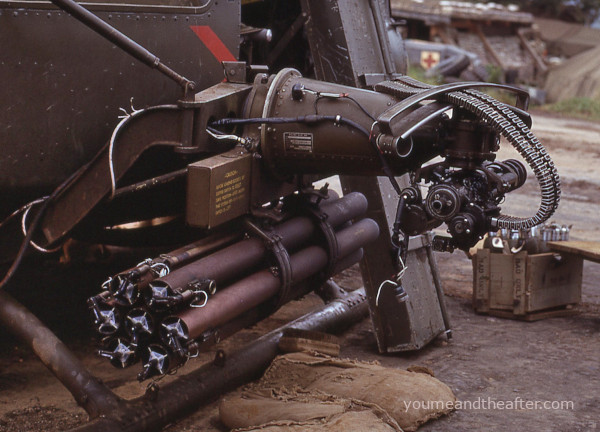 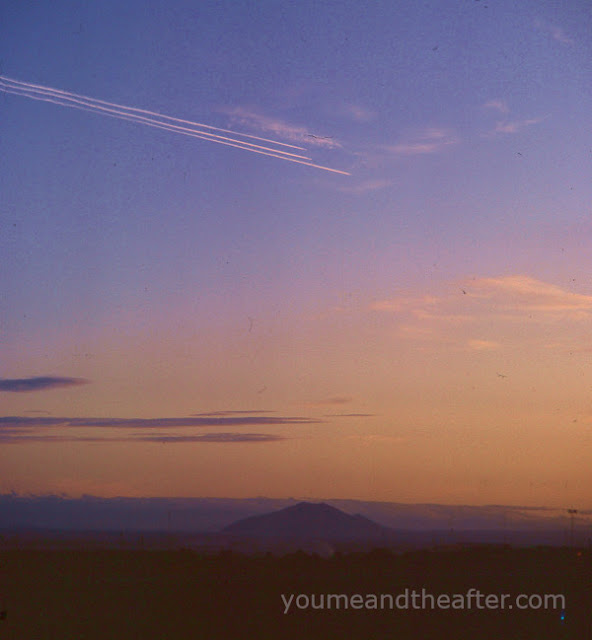 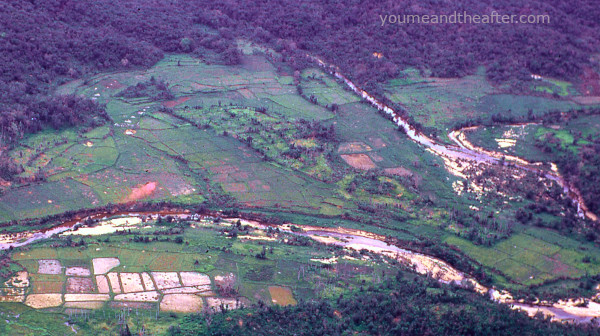 Typical marking of troops on the ground location from which target location would be defined by the FO (forward observer). We would plan our gun runs from this visual and radio reports for their fire support request. 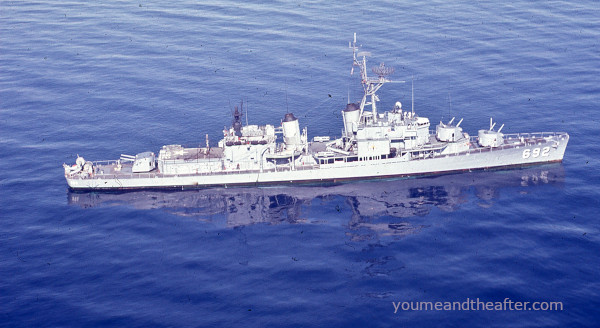 Looks like a model ship on a pond huh? Nope, Navy ship just off the coast line.

CHILL IN THE AIR

There is a chill in the air now in East Texas. Back to long pants and a sweatshirt in the morning. Garden has run its course. Winter crop of beets, lettuce and spinach are sprouting. Clean up chores and no more major projects this year. Her and I are enjoying the patio with new roof. Outdoor cooking station is proving to be fun and takes some of the kitchen cooking mess outside.

Her and I went with neighbors to several estate sales/garage etc. The first one was way way out, long shitty back road to a small no-nevermind house. We were early, they were not set up as it was their first time putting on a garage sale. Stupid me!! That is all I can say.

I said that it very much appears to be nothing here. Neighbor's wife kept saying, have an open mind. And was she right! We killed it there getting some great stuff at give away prices. Ten foot ladder like new for $25. Boxes of ammo dirt cheap. And old barn finds. Water totes with wrap around metal cage - $10. Filled neighbor's pickup truck and went back later with truck and trailer and filled both of those. 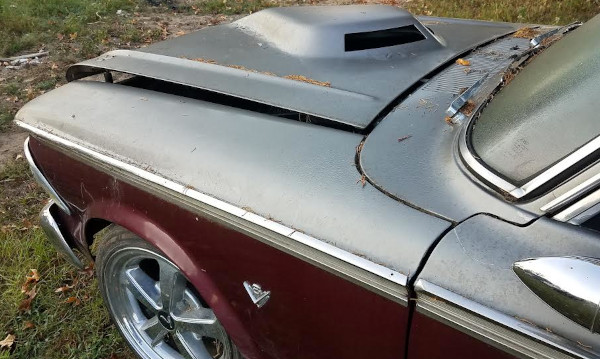 Finished the cooking island with Pyrex bowl set, small casserole dish like new and Texas wall art of metal just hanging on barn walls. Could have filled that truck again, but we are flat out of room here. No mas!!!

Center cuts very affordable. Marinated from net recipe, and followed net video of searing and finishing on a cooler part of the grill. Yep, waited 5 minutes before cutting into the chop. A good pork chop is as good as a rib eye steak. Well, damn close. 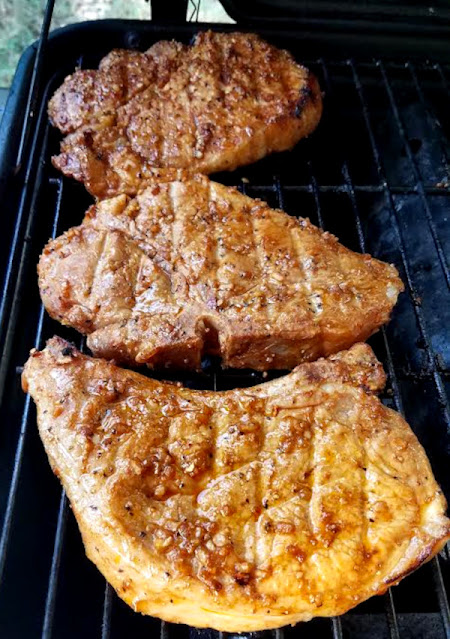 I use to be able to eat two of these w/o issue. Now, one gets it done. Three days of evening dinner pork chop has run it's course.

Many stories of shortages. The "whys and wherefores" all explained. Worth the  home work.

We have seen tidbits of some of this here, but nothing to where we could not drive to another market and "get it." This just not about the ships sitting idle in the ports/harbors, but the whole supply chain and lack of worker bees throughout that chain. Have you tried to get quickly checked out at a large chain store lately? Busy store with at best, two check out stands open? I have learned to use the old cranky man do not know how to do all of this dance and so far, one of the folks inside the self checkout does it for me. I am going to fight this self check out idea as long as I possibly can.

Her sister up in far northwest Texas says propane is hard to impossible to get. The propane store folks here say that, "propane today is not as available as it was this time last year." I asked about the coming winter and the gal said it can become a real problem. "Fill your tanks now" was her suggestion. I picked up two 10 gallon tanks to add to our collection.

Other friends have commented how expensive the current propane supply is. I have responded with "it is availability, not cost."

Some rain on the way and there are more backed up chores I need to get to. 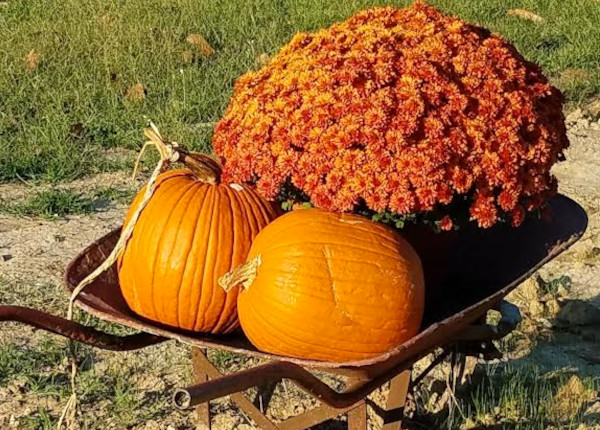