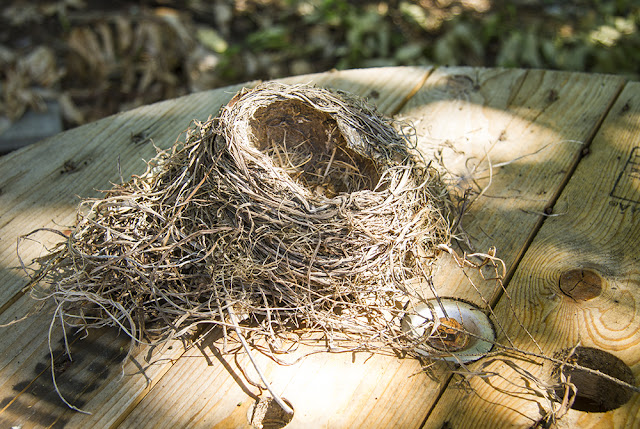 A wonderful home built nest by one of the local birds earlier this season. Amazing work and skills for nest-making. 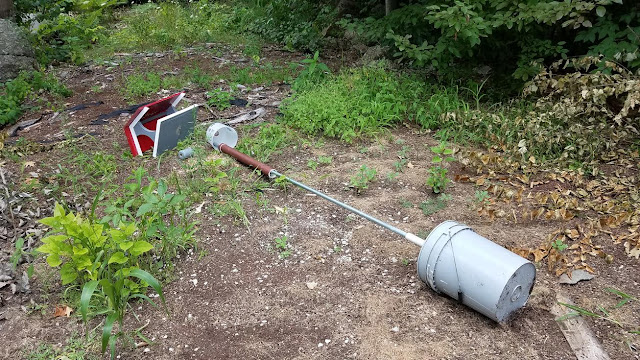 The good news here is that the new feeder made the fall with 0% damage other than the screws breaking off the round base mount. New mount will be designed to fail easily/repair easily. The bear just keeps winning!! And the little bugger did not even eat all of the bird food that fell to the ground!!


A good friend of the family recently referred to all those who are screaming for gun control as "Blood Dancers." Recent shootings bring all of this to a high boil and their immediate ranting is as dependable as the sun coming up tomorrow. Even that can change, but for now, will go with that analogy.

"Blood Dancers" gathered at the Concord State Capital to protest earlier this week. Signs demanding the governor "do something", all ululating and maybe showing a little jazz hands to make their point. Our governor vetoed three gun bills late last week and the long knives will be out until the Progressives attempt their override next month. So the fight continues.

There will never be any compromise and "the left" will never end their constant attack on half of America until we are hunted down one by one. And I thought The Hunger Games and Divergent were just fantasy movies. Total and complete government control over the people with some added sport for the ruling tribe. We might just want to take them at the word.

My lying eyes and ears have so many questions. Politicians are publishing target lists these days. Again, my lying eyes and ears. And do not think that these kinds of open threats are only on the news or net. They are happening to folks in little old home towns of America as I write. Open season on conservative thinking, the Constitution, law-abiding gun ownership and damn near everything, everywhere we look.


Weekly news explosions erase last week's news. Fifteen months till the next election and folks polling zero want to lead our country in the years to follow. The Socialism Platform is what they have to run on. Open hatred for our current president, our history, the law-abiding citizen, the wanton general taking of all of our rights, excessive taxing of incomes and destroying health care of every American citizen in the name of being "fair for all". Bernie and his tribe of fists-in-the-air or flailing-hand speeches cannot hide, nor do they wish to, their real life death march into Socialism for all of us.

Added to all of this is the declarative open season on middle America and any means to destroy, including open violence.

There are hard lessons ahead for all of us and I fear that our Americana may be lost forever. Hard to fathom; hard to fathom!

So what to do over the next 15 months? A good question.

Do I worry each day away? Will I comply? Will I sit back and be a victim? Do I hide in the past 75 years of my life? Add another hundred questions here.

I/we think, we do worry, we act as best we can while living a life, we read, we learn, we shore up more without going crazy, we eat better, we work life skills as simple as being able to walk farther each day, we lose weight, stay close to family/friends and for sure, find something to laugh and joke about each day. 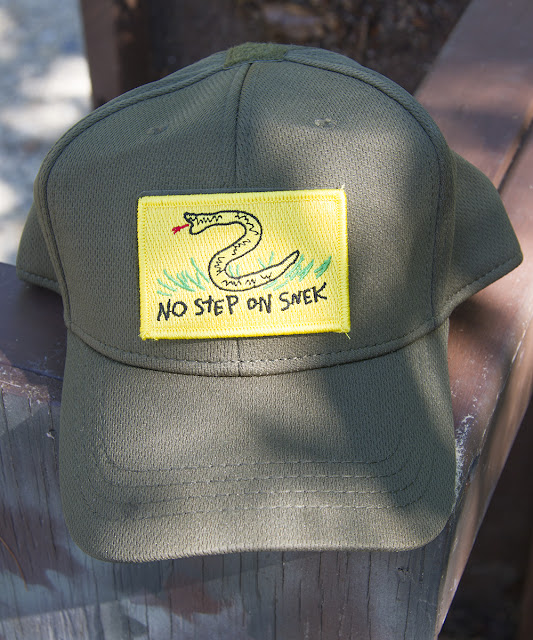 Have a wonderful week and as always, thanks for the visit.
Posted by ymata at 4:49 AM No comments:

SOME PHOTOGRAPHY THIS WEEK 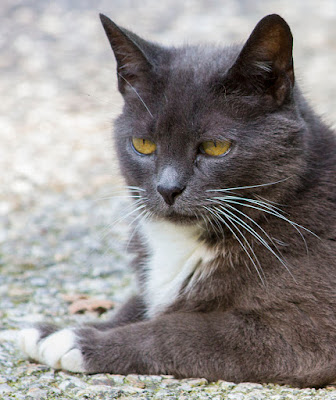 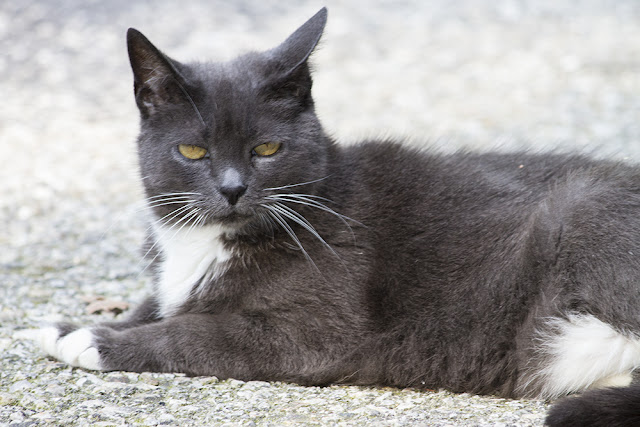 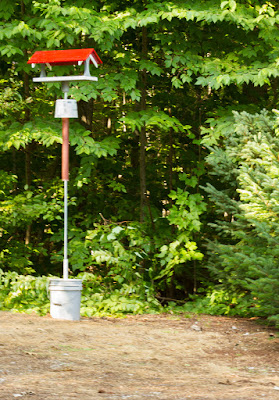 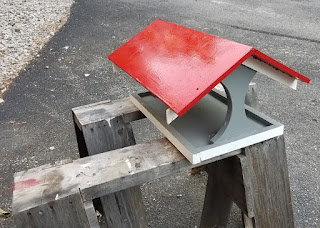 The old barn cat decided to come out and rest near me while I was taking the photo to the right of the newly raised bird feeder.

She is hard to stop in one spot long enough to get her photo. I happened on this and took advantage of her quiet and relaxing moment.

The new feeder was raised after dinner earlier this week. Some of the paint was still wet so bird food waited till the next morning. This is one of those projects I walk away from a few steps and then turn around an enjoy. A few more steps and repeat. 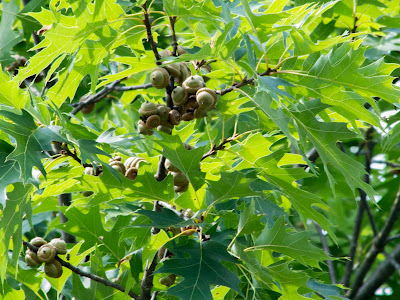 Acorns this season; not a one last season.  From the looks of this tree in our back yard, they are maturing. Still a smaller crop than years past.

Many have fallen and that seems early to me. Lots of little acorn hats on the ground, but the acorns are already picked up for storage. The surviving animals are most serious this season as there was a large die off of squirrels and chipmunks last year.

Last season posts covered the over-crowding and invasions into our garage for anything to eat by squirrels, chipmunks, some mice and a hissing possum. 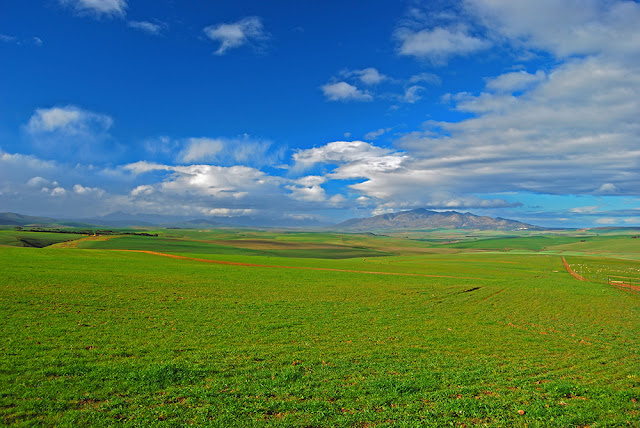 Some typical scenery driving from Johannesburg to Franschhoek SA, 2007. 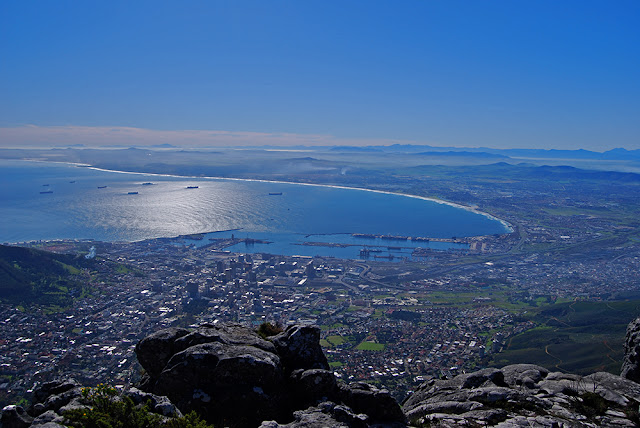 Cape Town as seen from a top of Table Mountain, SA 2007 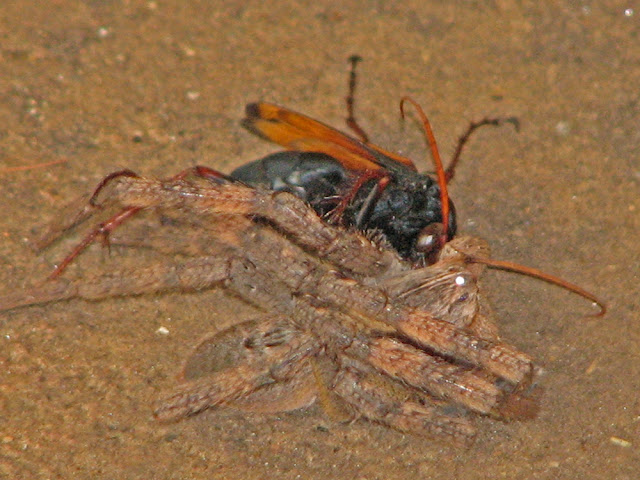 Spider and Wasp; a short story (I have shared before)

The day after arriving in Johannesburg, my wife and a colleague took me on a brief tour and my first lunch out at an open air market/cafe. High eight foot wall looking like formed from mud/adobe construction. See through cloth/mesh covered the roof and a dozen tables scatted through the restaurant. Quaint.

Just after being seated and with zero experience in South Africa, I noticed movement on the near by wall. It was a spider as big as my hand slowly making its way down to the floor. (I ******* hate spiders) This was the biggest spider I have ever seen then or now. Other noticed the spider, too. No one panicked. But I was not in Kansas anymore and that was lesson #1 of many more to come that year in South Africa.

Then one of the patrons said; "Is that one of those jumping spiders?" As God is my witness!!

Others were standing up, so as to be more mobile I assumed. We stood up.

As the spider made it to the floor for crossing the room, a large wasp was heard flying over head. Screw the wasp, I was spider focused!!

"Watch this" one of the other customers said. Apparently we were all in for some kind of event. And we were.

The wasp hit that spider mid back and the spider curled up like a fist on the floor. That fast!!

Now we had a dead spider and a live wasp starting to drag the spider to the other side of the restaurant. No one, to include the locals, made any attempt to dissuade or disturb the wasp.

I was lucky to get the photo above. There was no skill involved. Point and shoot while keeping the front door clearly in sight.

After a few minutes the wasp and the spider disappeared behind a wall and cabinets.

Beyond keeping our heads up and being prepared, it might be time to do homework about gatherings and outings we plan to attend.