Vietnam, Central Highlands, 2nd tour. Strapped one of these on after breakfast and wore it every day. Flew back seat as aircraft commander, single aircraft, volunteer missions, tree tops, to places we never went. And because we were not flying there, we were not to expect being rescued.

Sometimes life is at its brightest when walking close to the edge. But for me, not a place I wanted to walk too often, given the consequences of slipping.

But, the flying was 100% textbook exhilarating. I found out (then) that I could live with my heart at zero, my ass on the edge of the seat and my mouth as dry as cotton. Flight-suit sopping wet and mind/body drained when the skids touched down at home base.  But the head rush is still beyond words and at the apex of any piloting bell curve.

The version I flew was the AH-1G. This pictured model is much later in the rotation of up-grades. The collective is full-up giving a visual of the rotor blades at full-up angle of attack. The only time this in flight mode happens is at the end of an engine out autorotation, just after applying full pitch to cushion the landing. I believe the noticeable cut back at the end of the rotor blades was for a quieter rotor system. Should look that up.

Cockpit was 36" wide and the G model rotor blade was 30 inches wide. The aircraft carried a very nose low attitude at full tilt, straight and level.

Puts a smile on my face and makes the trigger finger itch.

To this day, a million years later, I am most comfortable flying anything at less than a hundred feet off the ground. I get nervous at higher altitudes.

Flight logs show 998 combat missions during the two years flying with the 1st Air Cav and the 7/17 Cav. All in support of our ground troops.

Memory lane. That was good for me!

(Helicopter above on display at the outskirts of Hawkins, Texas. Ugly rain day when I took this photo. A veterans' memorial. Very nice. Will return and fully note this memorial, the unit information on the side of the helicopter and share.)

Still in week 1 of the bride's recovery from foot operation. Visited the doctor on Monday and watched as he uncovered the foot from operation day. Very clean, neat and artistic in the work he did. I enjoyed watching his satisfaction at his finished project. He touched and gently inspected the foot. Matter of fact inspection.

In ten days, the pin and stitches come out. The pin is the size of a larger sewing needle and the little green clown nose is held on with an Allen head set screw.  It is indeed a work of art. Not sure though if you want to see that. But as builder of things, I very much appreciate his talent. 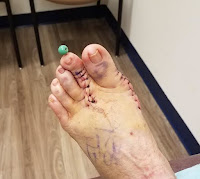 I look at this photo from that perspective. From a little research, this is a textbook photo "in the after" from this kind of operation.

Apparently, this pin is a Kirschner Wire and common in these kinds of foot/hand surgeries.  Suffice it to say, this photo is a very straightforward end result of common foot repair practices. Enough!

I promise no more foot photos.

SIGNS OF THE TIMES

Winter in east Texas has come and gone. Spring brings heavy rain from time to time I am told. Mother Nature is on the move. "Time to start planting."

One of the many roadside displays coming alive after quite a bit of rain and now days of bright sun. 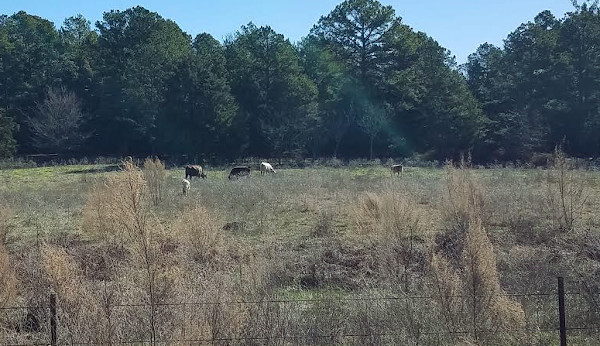 Fields greening and cows/horses are starting to graze and come off winter hay.

The bride's grandmother's lilies (gifted from sister) are two days into sprouting. These will continue to share much of the property here. 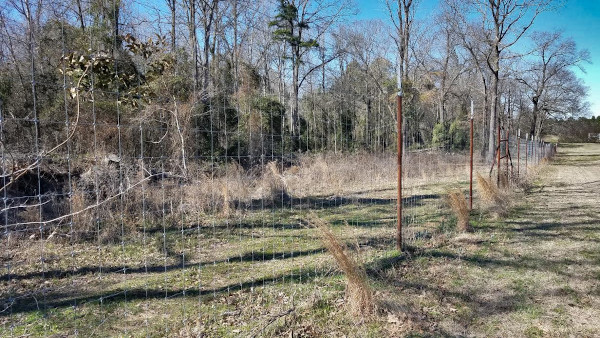 Called a high fence and used to keep larger animals secure within acreage. The wire does not sit on the ground but rather is curled back (to the left here) a foot and a half or so. Designed to prevent animals digging under. 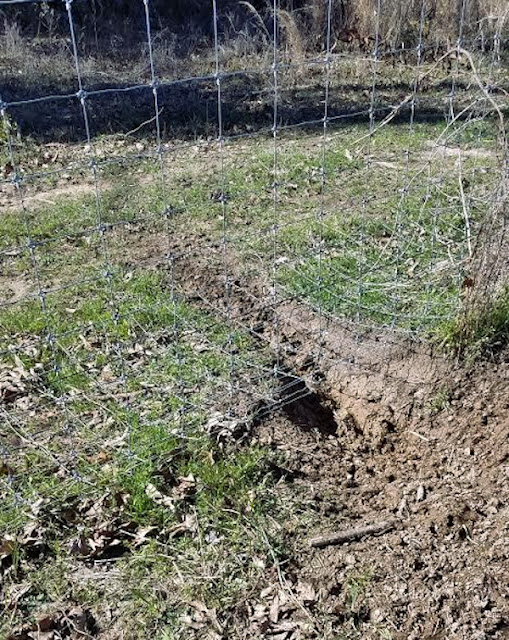 A better photo of the wire turn back. Feral hogs, though, are a problem and keeping them from coming and going is next to impossible. One member of this hog family lays on the ground behind where this photo was taken.

Cattlemen and farmers give no quarters when hogs are found roaming and rooting up the fields. Hundred and fifty yard shot from a resting position. Hogs scatter quickly and become a moving target as they return to safety. I am told that they will quiet down before venturing back through this hole under the fence. And yep, fence mending this week.

I am learning the ins and outs of hog hunting.

Last year while the bride and I were pulling the plug leaving NH for Texas, my closest friend was also seeking ways to get away from the winter and forever lock downs of New England.

He chose a sailboat in Florida.  Needed a little TLC,  but great bones.

After months of some refitting/repairing/up grading and getting his family accustomed to being on the boat, longer trips out of Miami were in order. First out of the bay motor sailing. Then sailing in protected waters. Each time out his family has grown into the adventure.

Awhile ago, sailing to Key West for a few days and returning to Miami.

These photos were shared mid-week after another sail to Key West and to the Dry Tortugas.

Folks can continue going full-tilt Howard Hughes in the social graces and self-imprisonment mentality or grab at every day of life and living.

Getting away from the crazies world and maddening crowds can become more than talk. My wife quite often says that we can do anything we are big enough to do.  You have seen this here before. 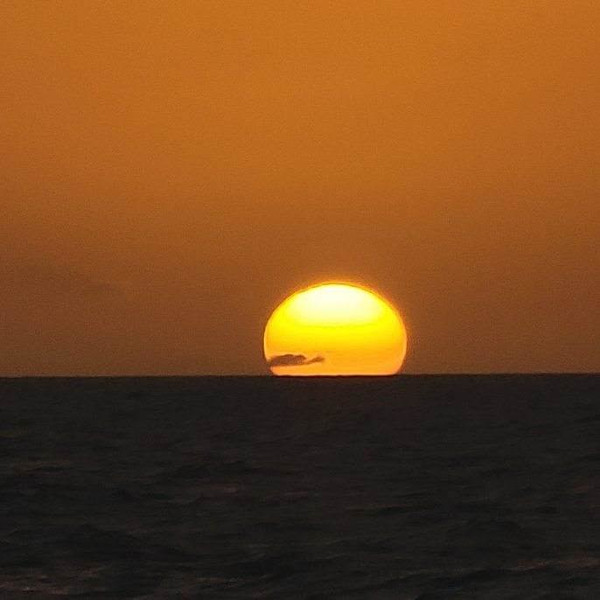 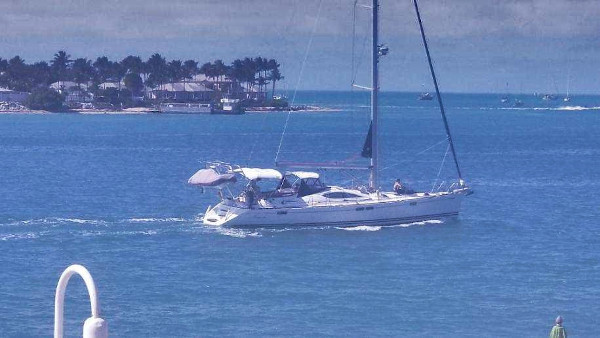 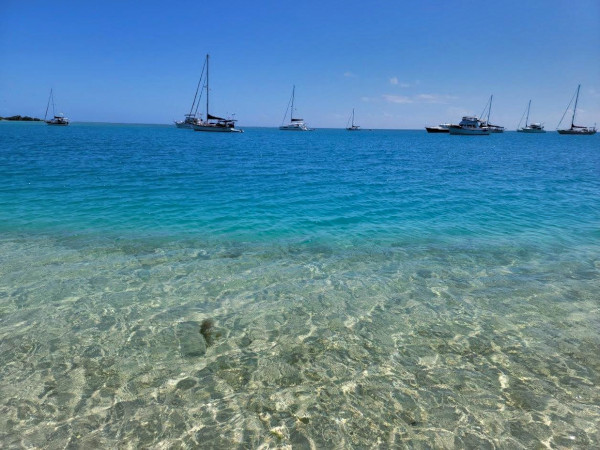 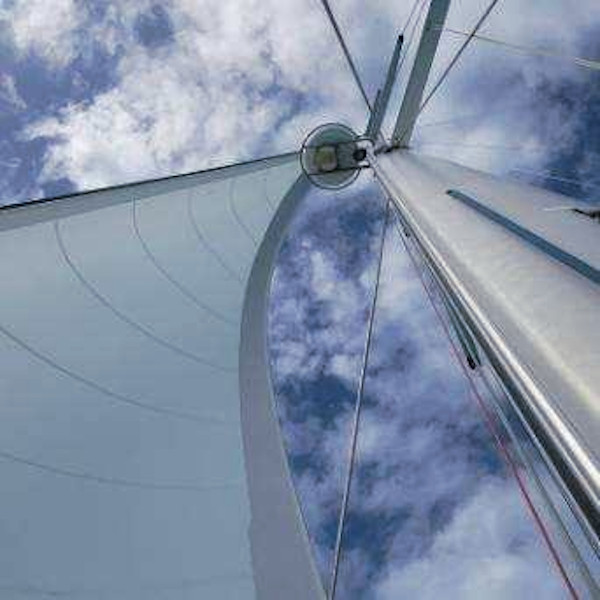 Side note:
Some 30/35 years ago, very good friends sold everything they owned. Home, 401K cashed in and other investments. Purchased a small sail boat in the pacific north west, motored it to the east coast and started an adventure of a life time sailing south along the Intercoastal waterway to the tip of Florida with two youngsters in tow. Yep, Key West.
This kind of decision has to be a 100%, pull the plug, decision of husband and wife.
I would have done the same thing and joined them in a heart beat. But!!!
They found jobs in KW. It was a time when everyone there was hiring. If you wanted work, it was available. The kids went to school and they progressed in both of the jobs they started. Into management. Kids did just fine. Hell of an adventure. Priceless in my book.
Adventures like this need to be done while young. Waiting for things to get better is a fallacy.
.............
C: drive clicking now more often. Then it settles down and starts clicking again.
This tower use to boot up in a few seconds, now takes a minute or two. I have gone to weekly extending Windows up-dates to 10 days down the road. Windows updates just screws this system into text and black screen.
Always back-up daily before shutting down now.
So, take the tower in to be looked at and get a new hard drive. Solid state, no moving parts? Or, do I put the money into a nice lap top for the things I do?
But I do love this computer and desk I purchased specifically for a room in Texas.
If I am gone here for a week or two, this will be the reason.
Yep, full failure yesterday. In the shop for diagnostics.
Using lap top back up. HT JY! Sometimes technology is wonderful. 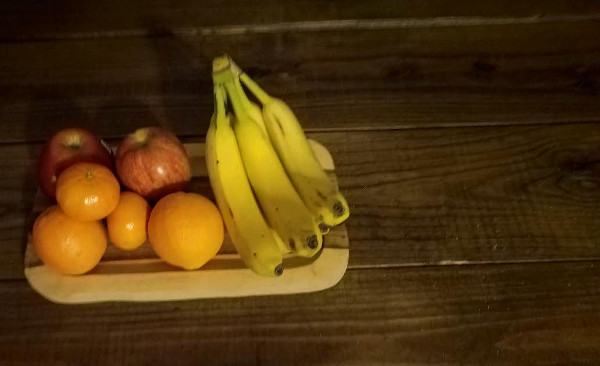 More daily fresh fruit. Usually for breakfast. My body appreciates.
Thanks for the visit this week.