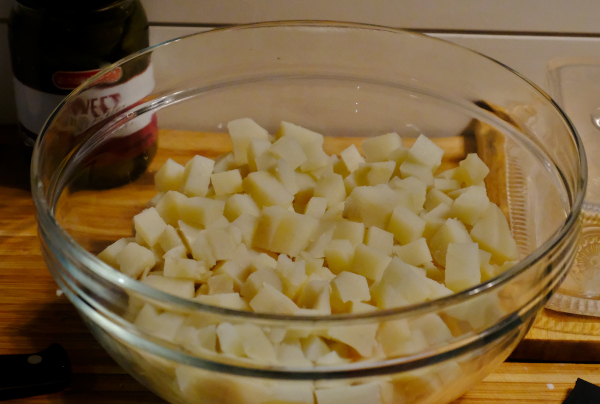 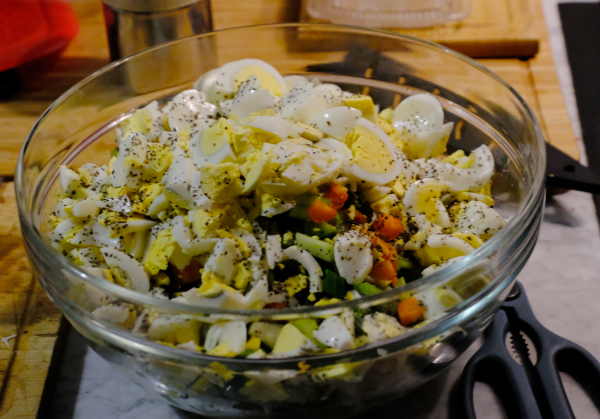 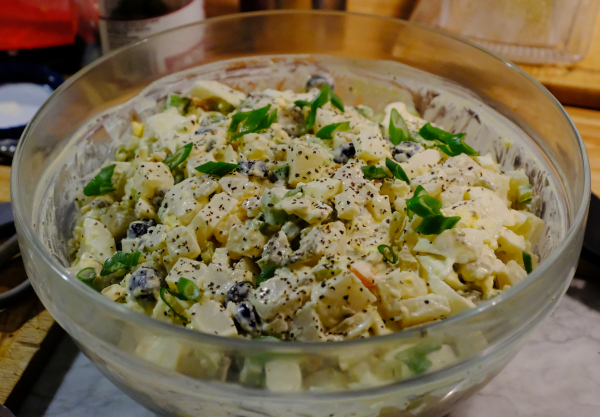 I folded in three large mayo scoops and two circles of mustard. Added a dash of black pepper / sliced greens of one green onion and wiped the edge of the bowl so as to be photo worthy.

This photo above is how I would present the salad on the table.

This is my father's salad. He always said that a jar of sweet pickles and a dozen hard boiled eggs with the proper addition of mayo were the secrets to the flavor. There is crunch and flavor in every bite.

Takes a little time to prepare, but I have always compared the above picture of dad's salad to every other potato salad I have tried. None have ever offered up the full potato salad experience as dad's recipe.

FRIENDSHIPS: Times of our lives

The kid in me is still alive. I still get tunnel vision at any prospect of getting to do what I have planned and especially if it involves some playing. I liken those moments to being a horse put into the starting gate awaiting the gate to open with focus only on the track ahead. No distractions nor daily life responsibilities mixed in. The kid in me loves this and is annoyed by responsibilities that disrupts the play. Not to the point of being pissed off, just annoyed. I so love the freedom of the single path I have chosen for those play laps ahead.

But living a life comes with responsibilities and distractions. At 75 I get it and think I have adapted well. I can still get to those laps with a quick stop here and maybe a quick stop there. Getting the play laps in and my other work done does bring a day's satisfaction. So the kid and I have learned to get along and play together.

As a spectator, I also get enjoyment watching others play.  I recognize those moments when good friends get together, get lost in each other and the play laps they have planned ahead of them.

Moving to east Texas has brought with it, out of a good luck of the draw, excellent new friends who live with in shouting distance. My wife and cattleman's wife have become the best of friends. Not a moment is lost where conversation does not flood their gathering circle. It is that exact moment where I recognize my wife has left the gate. Her only focus is on the track ahead with her running mate. Their hours ahead on a road trip or just sitting at the kitchen table become their universe. Oblivious to any world around them, they have left into their sharing of interests and ideas to the "Nth" degree.

Any talk from their husbands aimed at their circle, glances off with a wave of a hand or "a look." Not with any concern from either of them, but with the very best practices of no-never-minds. Their conversations and stories continue ad infinitum until an outside force breaks their circle.

Watching my wife play is good for the heart. 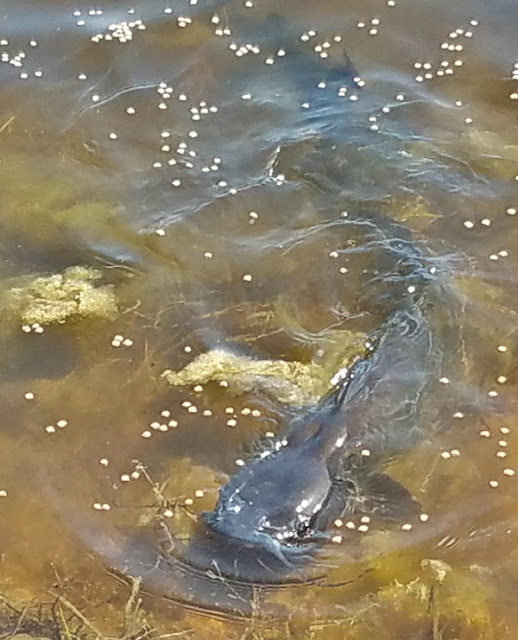 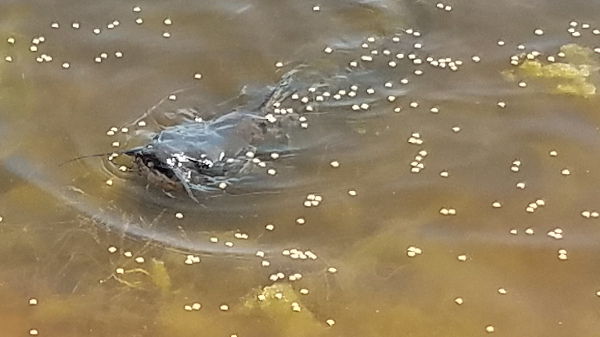 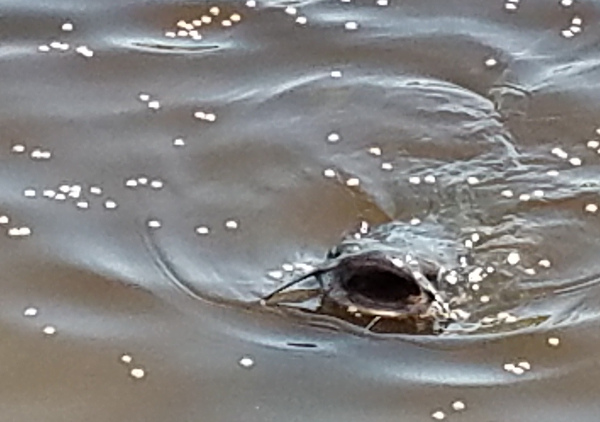 About as good as an east Texas afternoon day can get. Sitting in rocking chairs, talking trash with neighbors. I looked down from their porch at their pond and asked if there were fish in it. Yep, catfish and few turtles. He said that they usually will surface when he throws some feed in.

Like kids, we both got up and took the side by side to his shop, picked up a half a coffee can of floating fish food and drove down to the edge of the pond.

He tossed in a few handfuls and then the remainder of the can. A few moments went by and a dozen or so fairly large catfish started to hit the surface. They raised their heads, opened their mouth and skimmed the surface, filtering in the food and the water out. He says he feeds them from time to time, but mostly their are on their own with bugs, minnows and other pond life.

And yep they can be caught on a light pole with a chunk of cheese or hot dog. But just one. After that one is caught, the rest wise up and will not bite.

Cell phone photography was all I had and took 50 quick pics. I was hoping for just one good photo. Will take the big camera next time, set up better to capture the next feeding.

Watching those fish roll to the top of the pond and skim feed was a hoot and fun fishing without a pole and hook.

ALIENS; THE GOVERNMENT IS ABOUT TO DISCLOSE 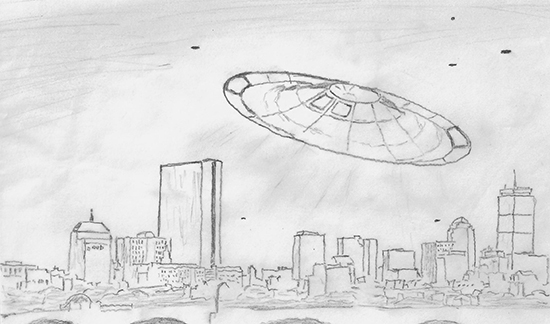 A drawing by "the after." Looks like an old Mustang hub cap!

"US intelligence agencies must tell Congress everything they know about UFO sightings....."

Yes I believe! Have for many years. Seems logical from historical collections of all the reported sightings and cave drawings of space craft. Things seen, sighted and carved into stone, and not of this world just might carry with it some credibility.

Besides in a universe beyond imagination, seems reasonable we are not alone and that life much smarter than we, is also a reasonable assumption.

That a constant government cover-up of every sighting is ongoing and consistent leads me to believe something extra-terrestrial is happening. Shutting off the space station live feed when these objects are captured in real time; yadda yadda yadda.

I am interested in the report. All that will be disclosed.  How will they disseminate the truth?

Can you imagine our current leader giving a press conference on this topic? The meme world will ignite. I suppose, "you know, the thing?" might play well in his "splaining."

Regardless, this disclosure will be historical and I expect it to be comedic in its delivery.

Paul; the movie. If you have not watched, give it a try. Good actors and fun entertainment. Serious language alert, tho.

Rain,sun,thunder,comfortably,warm,cool,cold,rain,sun,rain,thunder,downpours,sun,rain,clouds,breezy,rain,clouds,sun and a few clouds.

No sooner that I was comfortable in shorts and a t-shirt, I was back in the house putting on long pants and a sweatshirt, only to go back into the house three hours later and change back to the previous. Not complaining.

The garden is getting perfect sun and rain days back to back. It loves it and the new starts seem happy. The bucket of lettuce doubled in bulk in just two days.

What I did not see in the new garden design and plan was how fast containers dry out and need watering. 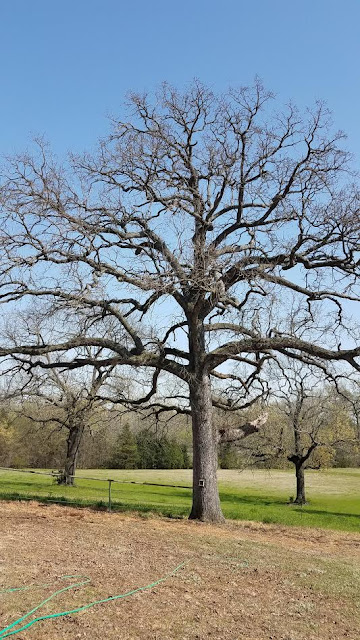 In my days of youth, this tree would be begging to be climbed. Today it is a thing of beauty, grace and a testament to surviving the tests of time. Visually majestic.

March is about to be history this year and with that the recognition that in a year seemingly just started, April arrives this coming week. Crabgrass taking over and all of the yard chores not gotten to last year are all waving for attention now.

Time to start more evening cooking on the grill and taking time for a cold beer, rocking away a late afternoon hour on the porch with the bride. How to get in more play time and less work?

Appreciate the visit and have a blessed week going into a new month.