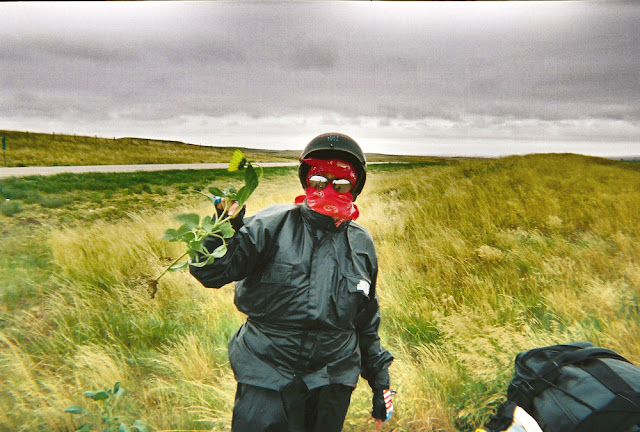 Early August 2005, picked the wife up at SeaTac and we were heading back to NH via Seattle. We had just spent a warm and beautiful morning visiting Little Big Horn and then departed for Sturgis.

Little did we know that a long portion of the highway had turned into semi soft mud due to recent rain and road construction.  It was on this portion of our trip that all of my time spent on a dirt bike paid off.

That portion of the road and the remaining crosswinds all the way to Sturgis that day turned out to be our worst and most dangerous motorcycle riding experience ever.

My wife held on around my waist as we slogged through the mud and said nothing the whole time. The cross winds and truck traffic for the last half of the ride were exhausting.

We were both dressed to keep out the cold horizontal wind and rain. In the above photo my wife still had enough energy left after the mud ride and some attitude to find a little fun to show how hard the wind was blowing. 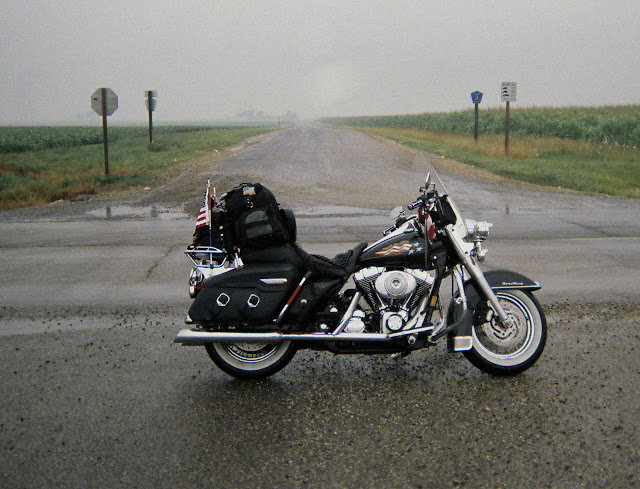 On the initial leg of this solo cross-country trip, July 15, 2005. I was trying to stay ahead of the leftovers from Hurricane Dennis. I stopped along the miles and miles of corn fields to start recording the first leg of this ride from New Hampshire to Seattle, Washington. The bike was still somewhat clean and I had finally slowed down enough to start enjoying my 60th birthday present; A coast to coast to coast Harley Davidson Ride. First leg solo to Seattle, the second leg would be coming home with my wife on the back. 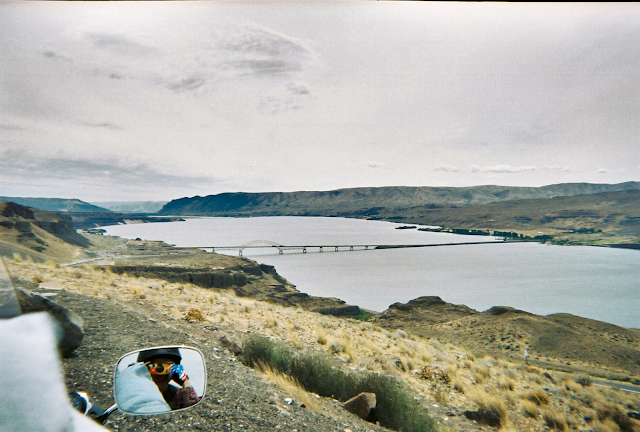 In this photo, my wife is recording the Vantage Bridge across the Columbia River. We were just south of the bridge having just come north from Yakima. 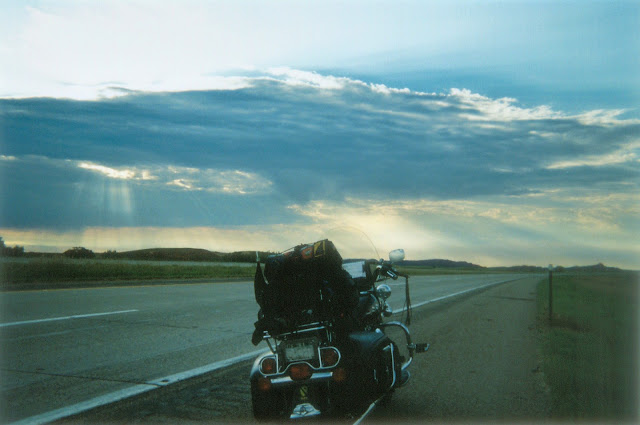 Quite often, I found myself alone on the highway with breathtaking scenery. A bike trip across the USA is everything that one dreams it could be. It should be done with enough time to enjoy and while still young enough. The very best birthday gift I have ever had.

Do a trip like this while you are young, healthy and state to state freedom of travel still exists. 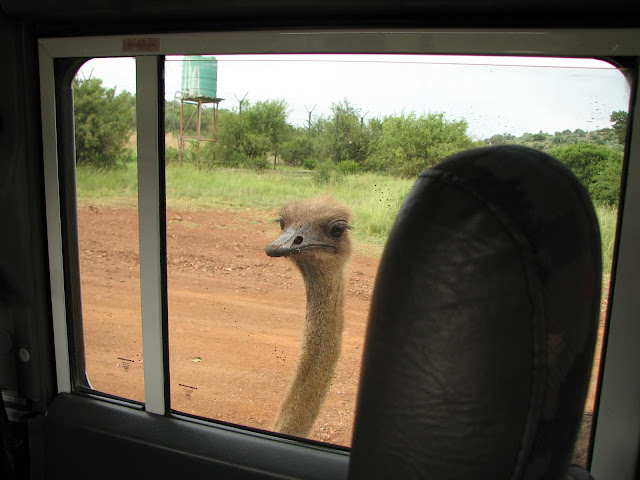 Checking out the inside of the Land Rover. Very persistent! 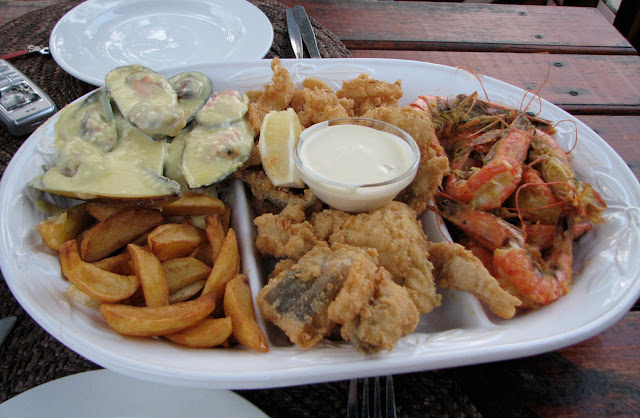 Late afternoon lunch along the coast near Cape Town, SA 2007. One thing my wife and I remember most about the year living in SA, is the food was exceptional no matter where we stopped or what we ordered. Ditto for a coffee or latte stop. 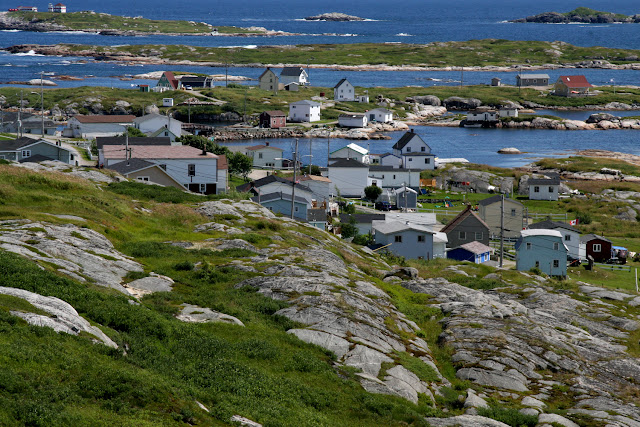 Photo taken early August 2008 while on a motorcycle trip to Newfoundland. We were gone for 12 days, ten of which it rained.

On one day during the trip, we arrived at one of our overnight B & B's. We were wet and cold at the end of the days ride. Raining outside still as we stowed our gear and trike.

That evening, the owners served us hot hamburger and gravy poured over a large serving of mashed potatoes. To this day I remember that meal.

How wonderful it was to be out of drenched clothing, to have warmed up and the simplicity of a hot, homemade dinner with good company. 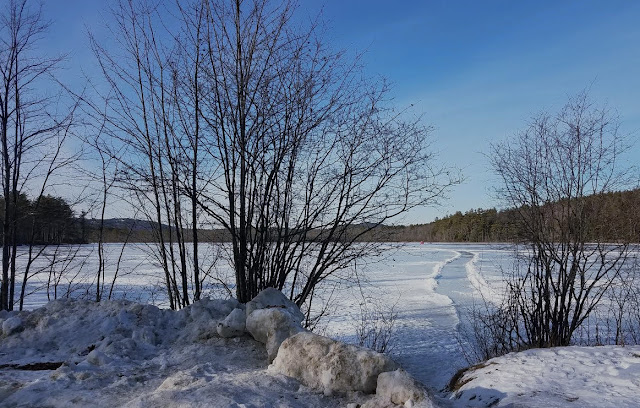 Pond near exit 10 on 89 North, NH. Warming temperatures then freezing temperatures seemed to come and go this winter. Usually, when the cold sets in here, a frozen pond can be trusted to be frozen. But this season, at least for this observer, I wonder. I see quite a bit of free standing water along the edges of many other ponds.

There were folks out ice fishing last Friday. I will just trust they know what they are doing.

For the first time in my life I do not even know who is playing in the Super Bowl today, where they are playing etc. I have always enjoyed some of the commercials, but those too are now steeped in agenda driven political theater. In fact, the selling of agendas feel as though they have permeated and over taken the sport.

There were good old days leading up to the Super Bowl, no matter who was playing. Friends gathering, fun junk food, TV dinners and watching the game. Long gone.

Thanks for the visit this week and you know the drill.
Posted by ymata at 3:01 AM