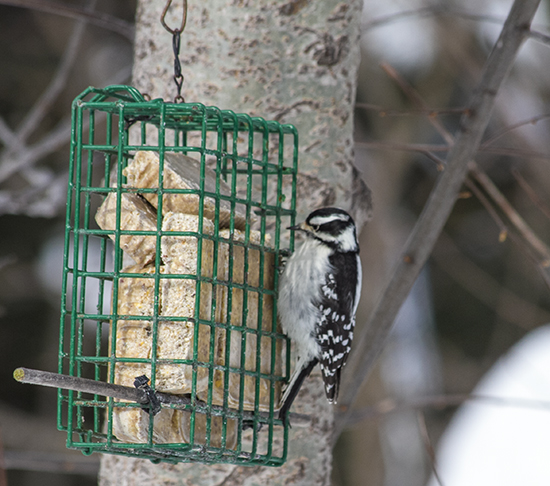 Feeder topped off and ready for a snowy week 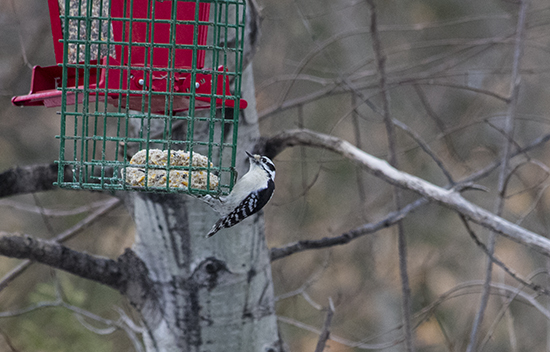 Squirrels hate the two new red bird feeders, but damn if they cannot "jerry-rig" the spring systems to cause bird feeder failure. I am working on it!

The little fellow above owned the suet feeder the other morning. Several cakes of suet last barely a week with snow-covered grounds.

I have not had energy to keep track of passing days.

The bride has been recovering from nasal surgery. No sooner did we get her settled in for a coupla weeks recovery period, I came down with bronchitis. Then that turned into pneumonia. The dog is just fine.

Homemade chicken noodle soup for both of us, and lots of good local honey and Irish tea. Son and fiancee have been meals on wheels a few times. Offers from friends to help but no way anyone needs to come inside this home till we are well. Several doctor visits with appropriate drugs in the mix. Many naps on the couch and recliner for both of us.

Mother Nature has been going through her throes of moving from winter to spring. Cold to hot temperatures in just a day or two, then freezing again. Snow with rain as final slaps in our face. Temperatures moderating as this month begins and as of this posting, the bride and I are improving.

We are having more and more conversations of wintering down south starting this coming winter. I did get the daily winter work done this season, but realize there is not much of this left in me. Maybe three different down south locations to spend January, February and March, 2019. Sure would add some new perspectives to blog about.

I BOUGHT MY FIRST GUN BECAUSE.....

An unarmed populous has little chance for long-term survival against tyranny. I have long thought that I will not live long enough to see the last rung of liberty disappear above me, but now I think that is not the case. I feel the sands of humanity eroding beneath my feet.

When does an ongoing problem reach a point of no return and become impossible to solve? When do folks realize that nothing is going to change, all solutions will hurt one group of people or another and the only option is to up-root and start over somewhere else?

The events over the past several weeks, originating out of Broward County in Florida, have again opened the flood gates for gun control.

POTUS is conducting televised public listening sessions for ideas. So he is "Doing Something." Instead of kicking the can or brushing off the protests and calls for carnage over all things gun in America, he has set the whole gun animal on the table for public dissection and comment.

He promises to follow through and asks why has nothing been done before and can congressmen and congresswomen meld some of their gun bills together for action. Congresswoman Diane Feinstein utters, "we tried." The optics are great and shines bright lights on politicians' gun stances.

In the meantime, some businesses are enacting age limits for selling guns and self-banning the sales of the "God All Mighty" worst gun in the world, the AR-15.

Keep in mind through all of this, the failure of several arms of law enforcement, mental health programs or lack thereof and a very good dose of cowardice and self-preservation in Broward County. The children have paid a very high price. Those who have survived are successfully being co-opted into the agenda with media front and center faster than any first responder could ever achieve.

Any application of "common sense" on gun issues ought to show that enacting more gun laws to prevent gun violence has as much hope for success as enacting laws against getting Cancer, Alzheimer's, the Flu or Pneumonia.

Be prepared to pay more in school taxes.  For the children and the teachers and the facilities and the new staff and all the new training programs. "Experts" will come out of the woodwork quickly with billings in hand.

After all the optics and grandstanding, final bills passed by congress and signed by the President ought to shed more light on the future strength and rights of law abiding citizens to own guns.

YES, YES YOU...  TROUBLE UP THE ROAD...good reads posted by Cold Fury

Changing seasons means it is time to update bug-out bags for spring/summer/fall. Seek out some solace and happy this week. Always, heads up and thank you for the visit.