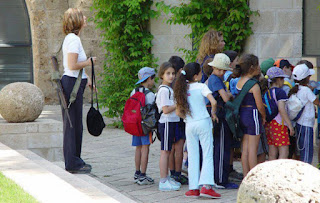 Children appear to be well-mannered, safe and OK. Teachers seem happy. No one hating on each other. How can this be? Notice teachers are also on watch, not just carrying. Little things. I have no doubt that these gals could/would turn deadly offensive as any moment would demand in the protection of school children. No doubt.

I listened to the audio while channel-surfing yesterday and some fellow was expounding on the non-virtues of arming teachers. He was very uncomfortable with trusting teachers with guns in schools. Proof that naysayers know nothing about the world and people of guns.

Today, we continue to group kids in a corner of a classroom while evil is free to roam. Notice the gals above are not heads down in a PDA.

I am late posting (2 weeks) and have run the gauntlet of the occurrences of these past days. Acts of senseless violence on school children with many doses of a civilization gone.

I have written and written this past days. Same old 2nd Amendment stuff. Same old arguments that it is not the gun.

Same agendas from the Left. Same hate. Same yelling and screaming; "Do Something and Act Now." So many people standing on the bodies of these children and grieving community. How sad we are. Now the adults are pushing these/their kids to push gun control agenda. A sad face, a teary eye and lots of hugging. Adults bussing their children to lay down in protest on the backs of this national tragedy. How sad we are.

Our National Anthem sung in horrible disrespect and accepted. A single student can complain that the National Anthem is racist and the adults comply. Maybe the NFL can man up and take another knee. Solidarity and all of that.

New York, San Francisco and Los Angeles have a very serious problem with homeless, drug use and feces in the streets.  Watch this and health problems arising from this squalor. It is going to get worse. Citizens are voting with their feet as the only course of action left in their own best interests, safety and futures.

I visited with a good friend of mine a few days ago and he said an old friend of his recently drove over to visit him. His friend was happy and giddy saying he found "something better." Heroin. My friend noticed the passenger in his friends car with head hanging down and noticeable hypersalvation. They shook hands and said their good byes.  Broken people?

The push to legalize drugs is working well across this nation.

Regardless of your take on this young man, listening to him here for a few minutes will give you a good window why universities do now want him on their campuses speaking to young people. It is not because he is gay!!


We are not very far away from these little guys being in our lives.

"Testing does not irritate or harm" the robot. Some one is going to feel sorry for these AI creatures and make damn sure they have all the rights afforded you and me.

Deputy took a position outside for four minutes while the shooting was in progress.

If ever there was a school shooting and mass murder where all the signs were ignored by law enforcement/local/national authorities and now adding this school officer's actions/non actions, cements our failure/serious desire as a nation to protect our children. Now appears that four deputies stayed outside while the shooting was taking place.

Compare their behavior to the unarmed coach who stood in front of his students and gave his life in their protection.

The Broward County story has developed over the past week and a half beyond wildest imagination. I sure did not see this developing the way it has. Bad enough the threat of school safety from evil, but when evil, corruption  cowardice are also inside the schools and law enforcement, we are in serious trouble.

Lets not ever forget the people who stepped in to save students and students saving students.


You are your own first responder.  Stay vigilante.

Thank you for your visit.