HERMAN IN SNOW AND A TESLA IN SPACE 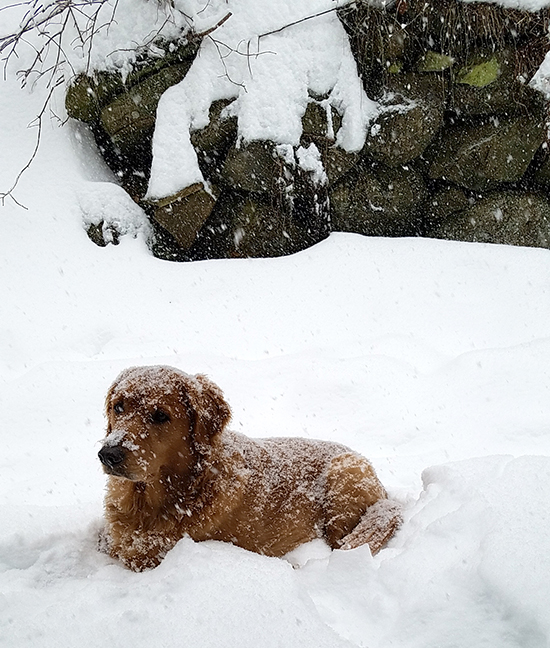 I enjoy opening posts with a current photo of life living here in New England. I have photographed most every inch of the home at some point and this rainy morning, I cannot even fake a good blog photo. I visited with son on our HAM channel this morning and asked if he could help with one of his photos around which I could build the blog opening. He sent several and Herman gets top billing this week.

I have tossed much of what I have written earlier to the point that Herman gets to open here. He has done his job and set me to work this Sunday morning. "He's a good boy."

I found this clip surfing YouTube and I have always enjoyed listening to
him. I like his take on the times we live in and he does push my buttons to view life from different vantage points. He hits the nail on the head a few times as it relates to times of our lives today. Too bad he has passed. Enjoy.

Here is a great example of we the people and the folks we elect to govern us. We have no one to blame but ourselves.

I want to quickly go down the rabbit hole on all of this but will refrain. It would just be ranting.

AMERICA THEN AND NOW

Proves the old adage that a picture is worth a thousand words.

I watched this story on NOVA “The Impossible Flight” this past week.

There is some push on down playing fossil-fuels and up-playing all of this for the good of solar power and climate change. If they were to true to themselves, they would have acknowledged their carbon foot print in their historic achievement. Fossil fuels made possible Solar Impulse. Twenty years from now, solar power may very well be able to do this. But not today!

I will tell you that there were moments in this program that set my eyes to watering. Came on during some of the grandeur and greatness of watching this airplane in flight. A wonderful marriage of technology, men, women and team work.
I have lived long enough now to have seen a few firsts in aviation. We are indeed a special species capable of greatness beyond our wildest imaginations. While the world wades in corruption, talk of war, greed and social injustices, men and women still risk their lives to push boundaries for the good of all.

Show this to your children and grandchildren and teach them how great we really are and that they too can do these kinds of things.

Let no one tell them "no, they cannot or no, we are not a great people and world." No One!!!

AND MY FAVORITE THIS PAST WEEK

Livestreaming of Starman and Tesla in space

Are any youngsters around the world excited again about space adventure and wanting some part of it? Or has the school systems killed all of that kind of mindplay and thinking? I am hopeful that a few youngsters are running through their kitchens with a toy car in hand overhead, flying in space and making whooshing noises as they move from room to room.

“Tex Johnson” is alive and well and his human spirit lives on. He was just selling airplanes.

My hat off to Elon Musk for showing the world what man can do if he puts his mind to it.

I said to my wife this past week, during one of our daily moments of digesting a crazy world moment, "and Elon Musk put a Tesla in space." I repeated it. Then again.

She said that she "got it." That in all the worldly muck there are still men and women who are opening new doors for the human race. I wonder how few people even realize any of this anymore.

And if that is not worthy of picking our heads up off the ground or out of of cell phones, this ought go give you goose bumps on human capabilities.

Watch near the end of the video the two boosters returning and landing.

This past week I have settled with being in awe of human kind.

God Bless, keep your heads up and hearts open. Thanks for the visit.