Mid-week daybreak and a foot of fresh snow covers the castle on the hill. Trees are laden down with snow and quiet is well-defined. Birds of all breeds have cleaned out the big feeder and will be on watch for it to be topped off. I force myself to pause, look and appreciate the surroundings. It is breathtakingly beautiful. The memory of it all melting away just two weeks ago is gone and March re-surfaces reminding us in New England that Mother Nature plays all through this month before she officially loosens the reins from winter into spring.

To talk of the work ahead this morning is of no news or consequence. Thousands upon thousands of folks have much more of a challenge moving snow and getting to and from work. Students with school delays, moms and dads having just one more daily obstacle to hurdle. I will not complain. 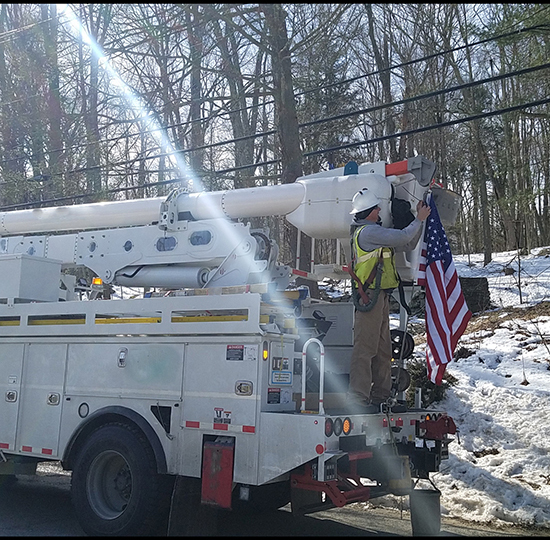 The photo above was named by my lineman son “Bucket-truck 'Merica.” His crew was one of the last to finish up the previous storm work in New Hampshire, Massachusetts, and Connecticut. The photo was taken on their drive back to base station NH. He said that they stopped into a Rite Aid for snacks and American flags were on sale. The crew purchased a flag and flew it all the way home.

He told me one of the stories of the their last outage. They arrived to a dozen poles on the ground all snapped and needing replacement. Snow plows had hit and drug several a ways down the road before realizing the snow covered downed poles and lines. Broken transformers on the ground and visibly a general mess upon their arrival. He said that other crews had kept going when they came by this outage. Thirty-nine homes w/o power and his and other bucket truck crews went to work, completed the repairs and threw the switch on to these home around 3 PM that last day.

While on the quick lunch break, a dog that would not stop barking was near where son was eating. The owner, on her porch, said that the dog will not bite but never shuts up. Son walked over to the barking dog and offered it a french fry. The dog kept barking so son threw the FF near the dogs feet. It sniffed and then ate the french fry. The next FF was taken from son's hand and the barking stopped and the dog allowed son to pet him. The lady on the porch yelled out, “Are you kidding me, all it takes is a french fry?”

Flying an American flag all the way home was a great way for the crew to end 12 days of storm work. I love these guys as do the folks who patiently watch them work to restore their power. These are great men and women in my book.

One of my first thoughts from looking at the early photos of the bridge in place is that the failure was instant and catastrophic.

Was it tested in a physical model form? Was it computer tested? These days, all of the stresses and loads can be tested in the computer. Were they? If so, how did the structure pass the tests? Testing via models can easily take design to failure and testing to failure is normal. Was there not at least one engineering student who asked what this bridge design looked like at failure?

New building methods and materials. The president of FIU touts the greatness of this bridge being a destination and being "fully wired". I am wondering how much influence the “touchy feely” things these days out weighed basic bridge design and construction. I am also curious what the protruding cement rectangles with apparent bolt ends exposed are. Was another part of the structure not yet installed? Googling “Florida Bridge Photos” will bring up several images (in images) showing those top pieces before and after failure.

As of publishing time this Sunday morning, we learn that an engineer called to report a crack in the bridge to the Florida Department of Transportation two days prior to the collapse. Apparently the FDOTdoes not check voice mail.

Engineering taken seriously: You will enjoy this short video.

Again I find myself approaching today's "happenings" with concern, reports taken at face value and trying to apply some common sense. I have spent a life time building things and have learned a lot. Time has taught me to overbuild, even when it seems not necessary.

There seem distortions in the space-time continuum, cracks in common sense, a most-high importance placed on feelings, confusions on which bathroom to use, students being used and co-opted way beyond getting a good education, "groupthink"  seems mandated, and a shutdown of view-sharing or debating sides of any idea or design, is becoming a/the agenda.

Today, the adults in charge are pushing grade school, middle school, high school and university students out ahead of themselves for causes and securing media coverage. Do not be surprised if violence is used in the name of securing safety from violence.

Students "want the same rights as a gun" while others display protest signs against the NRA while wearing a “Molon Labe” shirt. Dude, take me seriously!

Not much stretch of the imagination that serious learning inside of our universities might not be overly concerned about bridge design - loading etc. Dude, that your bridge? (I apologize)
..................

Thank You for the visit and good week wishes!