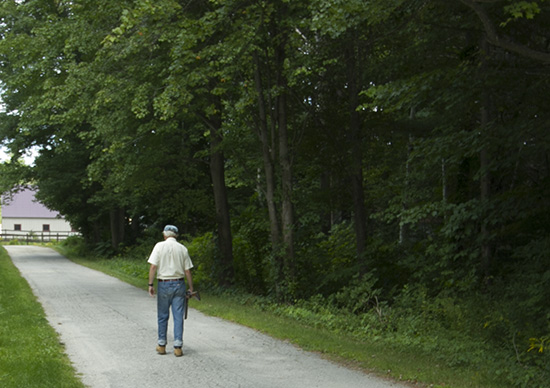 
Town errands to run early last week and I had decided that this week's post will have nothing to do with pissing, moaning and worldly things. Camera in hand and back roads to town, I worked on looking at the drive through a camera lens.

During one of my stops, photographing rolling hills and lush green fields, a man walks behind me and says something about my picture taking. Not negative but more of announcing his presence. I turned around to find him carrying an open breech double-barrel shotgun.  Matter of fact and not out of the norm for this state. I asked if he was hunting to further open some dialog and he quickly responded that he had "to euthanize a very sick duck."  This was not a time for idle chitchat. The man was on a difficult task with a humane obligation to one of his farm animals. We do not see these moments and rarely know of them. But owning farm animals or pet comes with end of life decisions, too. 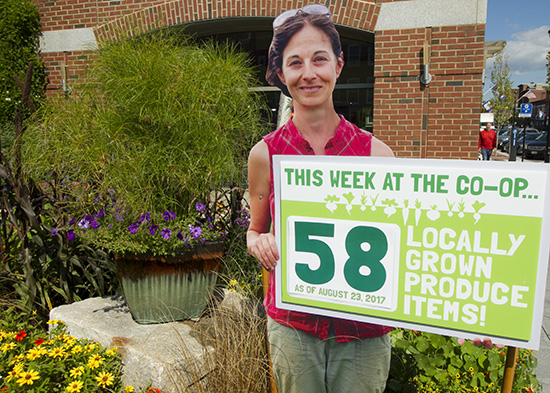 A very real lifelike cardboard cut out holds a sign outside of the co-op store in downtown Concord. One of my favorite stores to shop when I am in the area. I opt for their piping hot chicken noodle soup around lunch time.  Tastes so much better than the grease just a few blocks down the road. The smells walking into the store are like no other I know of. I will often go out of my way just to be closer to this store around lunch time.  An abundance of deli, buffet and fresh baked options along with a full grocery store of basics and bulk items. Soup to nuts for sure. 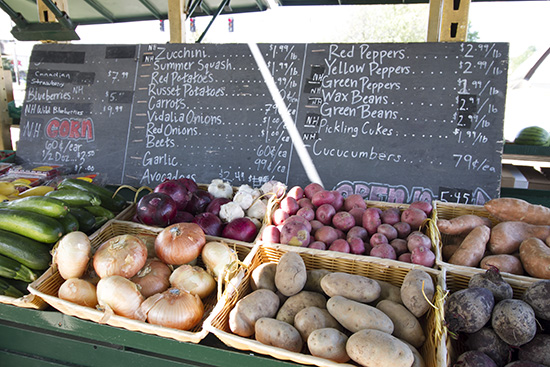 A streak of sunlight bisects the reader board at a roadside farm stand on one of the main streets just outside of Concord.  I asked the young man if I could take a photo or two explaining I wanted to blog about local farm stands this week. He hesitated saying that he was curious why I wanted to photograph his stand. He said that he was closing early this season due to lack of business. I asked why and he said he did not know. "Not enough people are stopping this season." There was a quiet resolve in his voice. I told him that I was surprised as this farm stand and location has been on-going as long as I can remember during the summer growing months and into early fall. I thanked him for allowing me a few photos.
....................................... 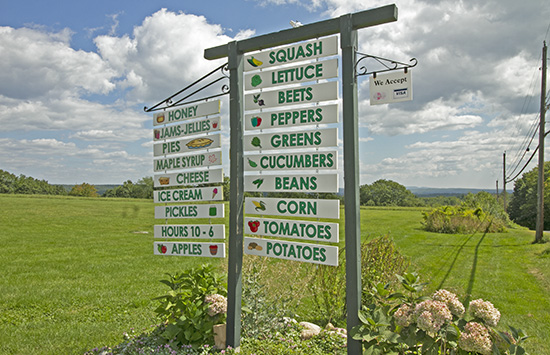 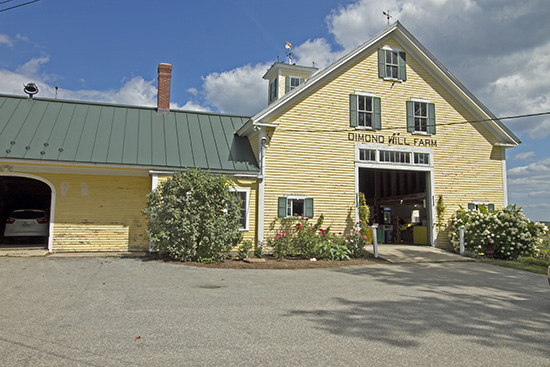 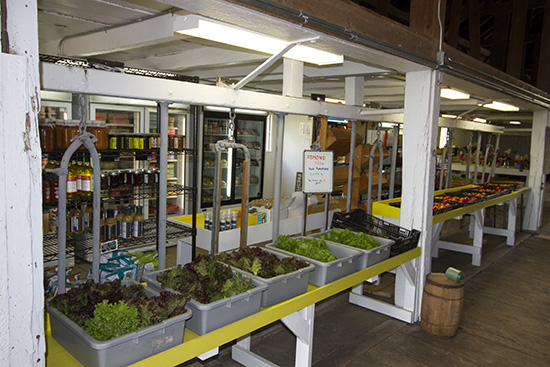 We have lived near the Diamond Hill Farm for years now, driven by several times a month and never stopped in. Always full of seasonal vegetables, fruits and locally grown and produced products from other vendors. All it took this week was the final effort on my part to slow down and pull in the driveway. They were fine with me taking a few photos and I thoroughly enjoyed walking this old farm building with stalls full of interest. Local fresh produce in abundance. 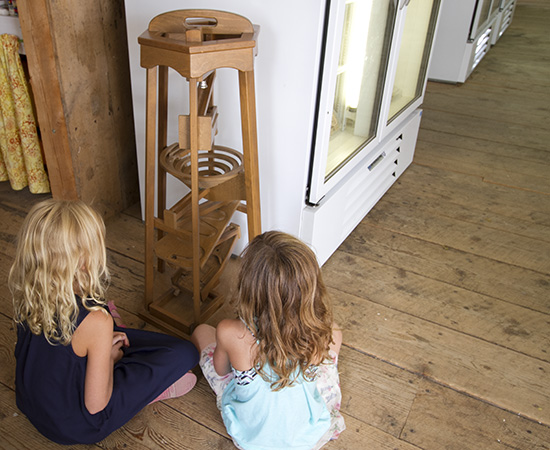 A young mother with her daughters came in while I was exploring. Mom went on about her shopping while the girls found this interactive marble maze. The noise of the falling marbles drew me to their location. The older daughter had started the marbles falling and was sitting completely taken with the random falling of marbles, the spinning gears and plopping sound from the marbles. I asked mom if I could take this photo of her playing and noted I wanted to get a photo from the back of the girls. She said fine and little sister immediately became interested in this, too. With just a little coaxing, I set this photo in motion. A good photographer would have captured this the moment as it unfolded but, in this day and age, I always ask permission. Besides, half the fun was setting the girls to this task. 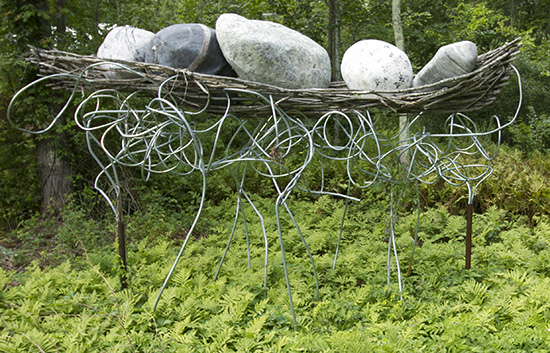 I am a fan of life-size art. And again, I have seen this before but never ever taken the time to stop and enjoy. Art that draws attention should be taken in and appreciated. I have been too lazy. But this past week, I again slowed down to stop and enjoy. The little sign below this art says. "Suspense  Saplings, Hand Made Rocks and Stainless Steel. Andy Moerlein   $5000."

Not too many years ago, the ability to get a panoramic photograph entailed several stills from the camera and then a stitching option within a photo editing program. Doable with a little effort. Today, with my smart phone, a panoramic photo is one of the options and all I have to do is hold the camera steady as I move across the view I want to photograph. Technology inside the phone and camera option does all the work for me. Even the dog came out wonderfully and she was looking around while I was panning.

We hired two young men for a few hours this week to clean up parts of the yard, add bark mulch and edge around the front yard. Yard work that I absolutely hate - but end results I love - put off so long that it never ever gets done. Her inclinations mirror mine.

The young men worked several hours at a reasonable rate. Pleasant to be around and knowledgeable of landscaping and handy man jobs. I ran the tractor  bringing up bark piles from down below and they moved it as needed. Her supervised.

The lawn has a wonderful edge now and all we have to do is a little maintenance as we mow each week. 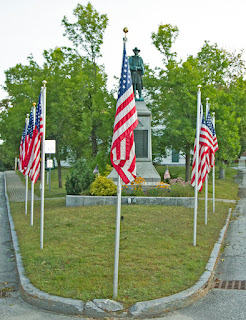 The sun was just breaking over the hills yesterday morning when I drove to town to get a couple photos of the flags framing our little town.

From the post office, running west a few blocks, the heart of our town was bathed in the red, white and blue.

"...constitutes a yearly national tribute to the contributions workers have made to the strength, prosperity, and well-being of our country."

Has been a challenging week for many in this country from Hurricane Harvey. Flooding will continue for several weeks and another storm brews off shore. Too early to tell, but a storm brews. North Korea pushing harder.

Stay alert, prepared and be ready to act. Have a good week and thanks for visiting.
Posted by ymata at 10:53 AM