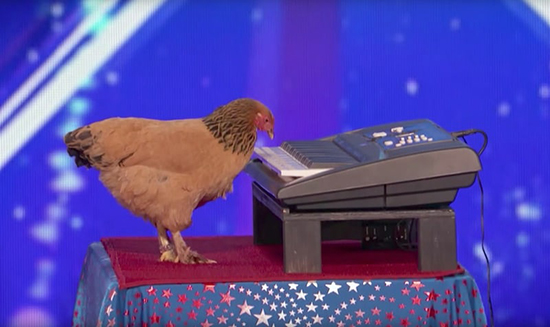 
We are constantly on the hunt for good media entertainment. We have watched some of our favorite movies too many times and both of us channel surf too much now.

I have been able to save a few of the evenings by recording programs I will not normally sit down and watch due to the hype and over soaking of crap. Recording allows me to fast forward to just the parts that may interest me/us.

And so it was a few nights ago when I pulled up America's Got Talent 2017 and fast forwarded to the first act, a chicken playing a piano.  It was a train wreck from the beginning and I could not turn it off. My wife became so annoyed that I was going to sit there all night watching this kind of *************, that she got up walked out and went into the office seeking a normal zone. Suffice it to say, she was upset that I had stooped so low for some evening entertainment.

I tried to tell her that it was a train wreck I could not shut off. I have never ever heard a chicken play a piano and was in a trance over which I had no control. But she had had enough, to the point of leaving the room. So I turned it off, apologized as it was a low point and I knew it. We both settled into doing a few emails and checking blogs. Nothing of interest on a hundred TV channels!!

In my office, I put on head phones and headed to searching AGT and the chicken. I found it, did not watch it again but wondered what other talent might have been on that night first airing. Low and behold, Puddles Pity Party came on as a contestant.

If you check this out and can get through the clown act, the voice is what hopefully will capture you. I always have to wade through the clown thing to hear him sing. It is the same wading one has to do through some of the Lady GaGa costumes just to get to her voice. Puddles' Clown act is the hook that gets his voice out to be heard.

I went back to the TV, fast forwarded through most of the first two hour season premier episode and sure enough, there he was near the end. I told the wife to give the show one more chance and when she saw Puddles come on, she sat to watch.

We were surprised that no one, especially the judges, knew of him.  Not because of his quirky clown act, but because of the voice. We were also surprised that the audience did not know of him either. Puddles has been around for quite awhile and we are fans. The clown gig is an act well perfected.  Mike Geier a big man with a big voice.

Nope, not going to feed the world on this beet crop. A test planting as I am the only one here who likes beets. 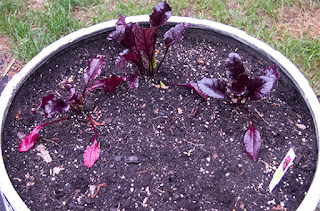 I fully expected to see all of them dead the other morning, the last surviving three, also drowned in the early cold June rains like their sisters. But, to my surprise these just might make it to the dinner table this season.

Been a cold and wet start to summer in middle New England and not conducive to starting beets early or carrots. Just found one of the basil plants has drowned and fallen mid staff. Constant rain reminiscent of the Pacific Northwest  and the accompanying low clouds depression not helping.


The transfer station (municipal dump) is close by and I made several runs yesterday to zero out our week's holdings. An older man like me, pulled up behind me, beeped his horn and threw me a few barbs. Old man talk for "how ya doooohn?"

We soon waded into the lack of understanding our world anymore. Both of us "whying" this and "whying" that and "they do not get it." It is not the way it used to be, whatever it is. We complain, shake our heads and laugh. I like laughing and kidding and this one thing that old men do well. Throwing barbs, grinning and then laughing. A game of catch and release. But through it all, we both realize that it is not our America anymore. Well, it is not the country that built us and that we helped build. Seventy-two years for me and so much has changed.

My older friend wears his age well this day. Thin, stands fully upright, a few days unshaven and fits the scene perfectly wearing a flannel shirt tucked into work pants.  I very much like and enjoy his take on life, living and being old. His dog sits in the passenger seat taking in the on-goings with not a care in the world. I am sure the dog could throw out a few barbs, too, and dog laugh with us if we could cross that barrier.

The garbage dump is a social environment in this neck of the woods. Always cross paths with neighbors and visit with others coming and going. Folks are chatty at the dump and I always find it humming with good human interactions. Every now and then another man's garbage turns into this mans treasure.

Thanks for checking in.

Eyes wide open when out and about this week.