One of my favorite times of the day is the half hour after dinner. Time to sit and relax. Let the meal settle before I have to go outside to attend to evening chores.

Last week while my wife was on the phone “doing some splaining”, she got up, left the room and quickly returned with her .22 long rifle rifle. She handed it to me with one hand, covered the phone and said, “there is an armadillo in the front yard, go kill it.”

Putting the phone back to her ear without missing a beat. She had just tasked me to do murder; in the middle of my happy half hour; in our front yard.

Armadillos are nasty. They tear up a yard the way pigs tear up farmers' fields. Our yard has been hit hard and especially my wife's garden. Chockablock of divots large enough to easily trip over. She carries a hateful grudge. Plus walking parts of our yard is just like walking through a mine field of stumble.

I looked at her and she is pointing out the window. Pursed lips.

I charge a round in the chamber and put the safety on. She is also showing me the shushing whisper sound with her finger.

I walk out quietly and there it was. Meandering. Owning the yard. My yard. Our yard.

Oh how I longed for my shooting bench. I can pound nails with a .22 at 30 yards. But on this day, it appeared I had to shoot from a rifleman's standing position. There are trees nearby I can brace against, but that means moving and the damn armadillo is wary now. Crap!! I have to man up.

Rifle raised, left arm braced against my rib cage, sight picture shaky. Shaky is the key word to this whole story. If the .22 had full automatic and I had a large capacity magazine, I could have wreaked havoc. Armadillo heaven.

I calmed down, trying to find the still sight picture, pushed for all the correct shooting rules, breathing did slow the shaking but not really. As the sight picture passed through the kill shot, I squeezed. I did do that.

The dirt kicked up lower left of the armadillo and the damn thing jumped two feet straight up. It did I swear. Had no idea those animals had any physical attributes like that. Time slowed down. I thought, “ok, hit the ground” and I will take shot number two. Adjust aim point.

And I am not making this up just to enhance the story. At the instant the armadillo hit the ground it moved 20 feet to the left the exact say way the road runner disappears in a swirl of dust. From a fixed target, to airborne and then along the ground at lightening speed. Faster than it took you to read that last sentence.

I had failed.  I dropped the mag and shot the next loaded round into a large tree trunk. I did hit that. Stationary, large and not moving. One large dead pine tree for my efforts. I did the unloaded safety rifle drill and picked up the magazine.

Now the walk of shame. I gave my wife a failure sign walking back into the living room. Her man had failed her. I had failed myself. At best, I pissed off one armadillo.

No photo here of dead armadillo with the rifle resting across its carcass, me crouched on one knee with ballcap set to one side. Slight grin. Yea! Getting down to one knee!! Now there is a  dream.

The next day I took her rifle out to practice that shot. Stationary steel target, same distance. I was hitting the target, but shots were low left. Still the same shake and good trigger pull. Low left has plagued my for eternity. And yes I know the common mistakes. I have taught it to many students. How do I over come it. Shoot more often. Plink more often. Practice more often. But the shake!! That damn old man shake.

If that f'ing armadillo ever comes across my small shooting range, while I am set up on the bench, it will be doomed. But the armadillo lives in a different world.

There is a long brush line in the back yard from where the armadillo has exited at dusk. I have seen him several times, but never with rifle in hand or with a plan. I need a plan. Practice, practice practice!

I wish there was a good story to go along with the dent in the pan. 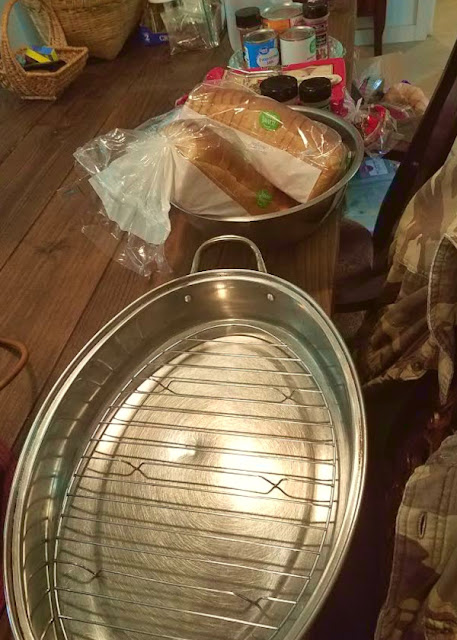 Her just had me help get down the turkey pan. She set it out along with bread for dressing, pumpkin pie stuff and seasonings.

She identified the turkey in the freezer that will come out Tuesday to start thawing. Bought an extra turkey last year because you just never know.  And yes, just because, we will fill the hole left by this turkey with an on sale Butterball. Might get a "hankering" for turkey in July. Actually making sure we have a turkey next year.

Again media headlines say the same thing they said last year. Only the year has changed. "Gonna be the most expensive turkey dinner yadda yadda yadda." A constant media attempt to kill our holiday enjoyment and family gatherings.

Just her and I with our turkey dinner. Usually is. Family in Dallas has invited us, but that is a long drive and back home late in the dark. We do not do driving in the traffic and dark any more that life mandates. And they are all invited here but the traffic and night driving plays the same for them. A phone call will do just fine. "Happy Thanksgiving!!"

Son up north will be a phone call and some time to catch up on life and living.

And like every year, I am looking forward to all the "fixins." I look forward to taking the electric knife to one side of the turkey. I like the leg, meat falling off the bone, her a few slices of breast. Dressing, mashed potatoes all covered with gravy and that first bite of hot roll, buttered and drug through all the gravy till it is gone. The dinner will have officially begun for me. Turkey sandwiches the day after rank as high as the main meal. Pumpkin pie slice completely covered in whipping cream. Three days later, we will not want to hear the word turkey till a year has passed.

And within this meal time my wife and I will share the little things in life we are thankful for. A small prayer will start the meal and thanks will be given from our hearts. The simple things in life. Loving and being loved. Great friends/friendships/family. 77 years and 70 years. How fast they have come and gone. Every day now more precious than the ones before.

The very best Thanksgiving to all of you have stopped by to visit over the years. God Bless.

I'll leave you with this.