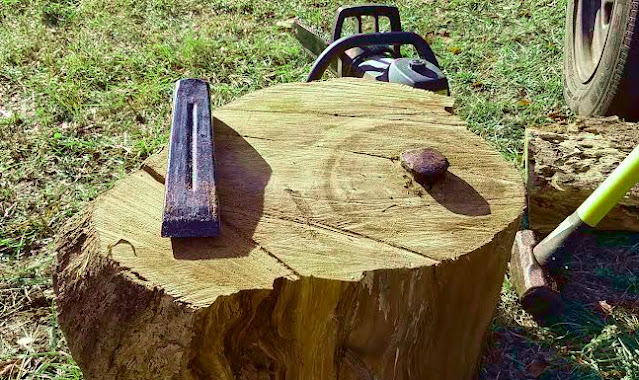 Pulled over to visit with neighbor sitting on one of the blocks of wood in his pile. He is my age and was spending some time splitting wood for the coming  east Texas winter. He thinks that some of the local plants/animals are telling him that it is going to be another cold winter like last year; that hundred-year Texas freeze.

He showed me this splitting wedge stuck in the block and we both laughed out loud. He said he was now splitting these blocks with a chainsaw. They were all burled and full of hardened knots. All but impossible to split with a maul and wedges. It has been many years since I have set a wedge like this splitting wood.

Plan B was to get the splitter from his son. The upside of this will come winter as this wood will burn hot and twice as long as dense as it is. 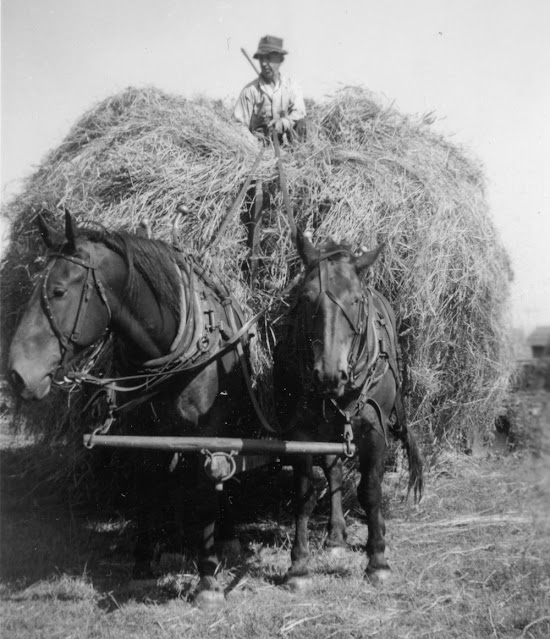 ......before grandpa bought his first Ford tractor for the farm.
................
FINALLY DECENT BREAD AGAIN. It was all in the tap water minerals causing the bread not to properly rise. 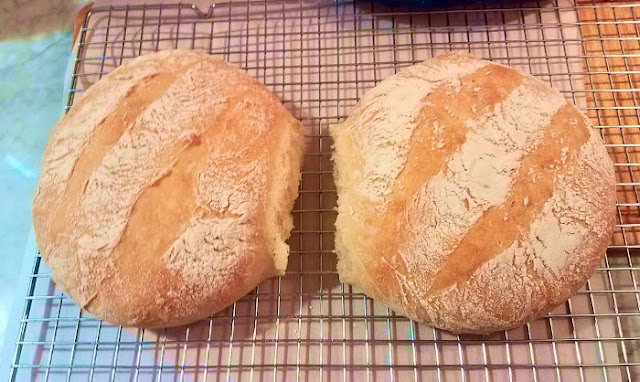 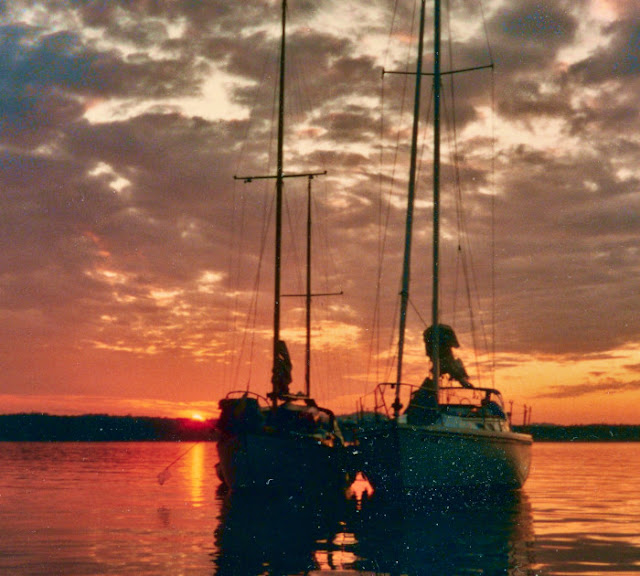 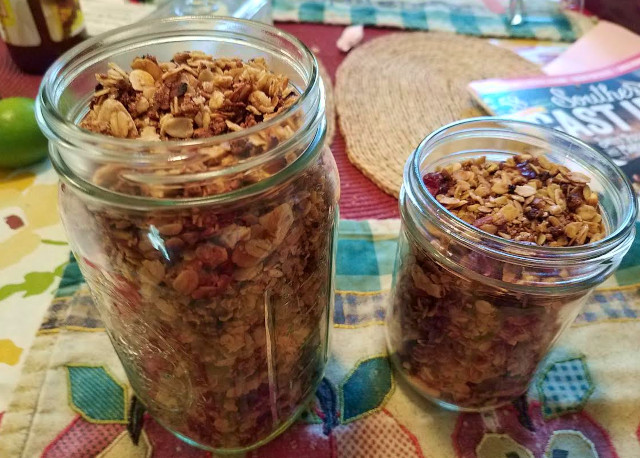 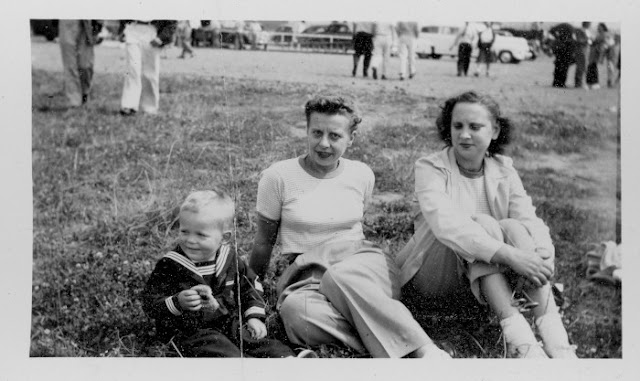 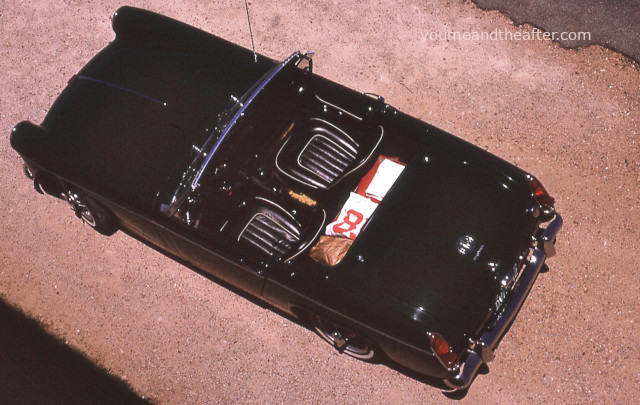 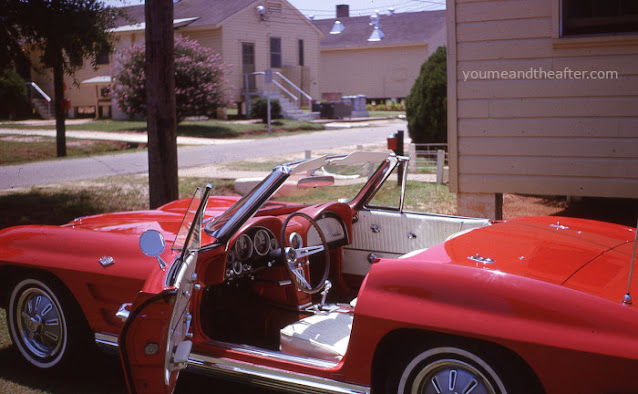 ............
FLOATING RESTURANT HONG KONG, 1967. First time in my life I walked into a restaurant and picked my lunch live from a large glass pool of swimming fish.
Probably most every G.I. that went to Honk Kong on R n R ate at this restaurant once.  It was the list of places to visit and experience. 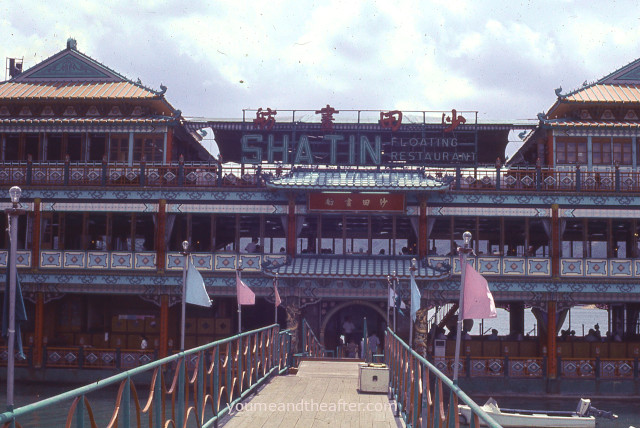 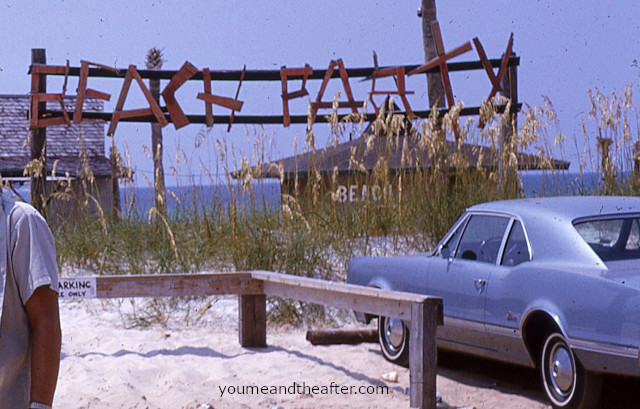 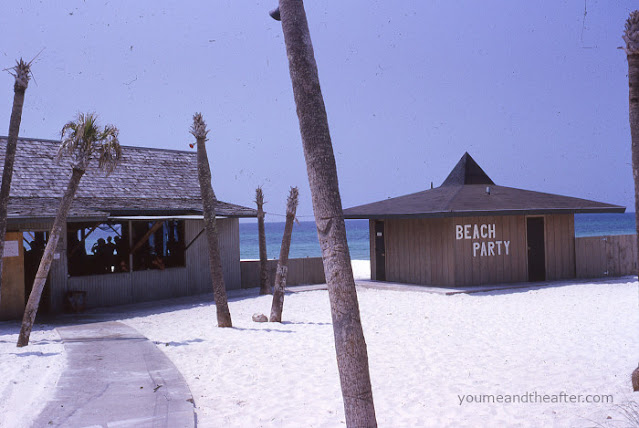 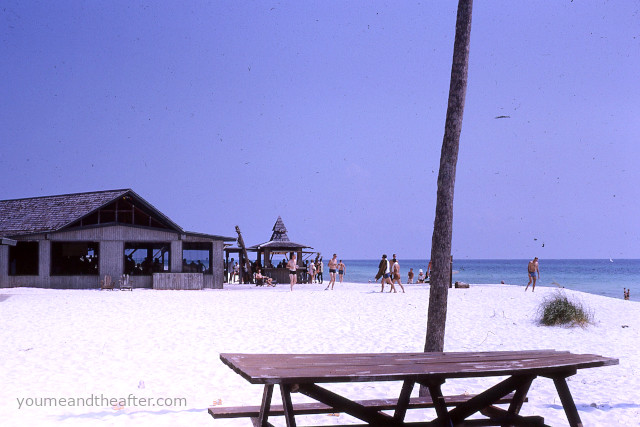 During the last months of the Army helicopter flight school training, cadets were excused from noon Saturday till midnight Sunday. We were all but assured our wings and bars if we stayed smart and did not mess up.
We were usually set free around 1100 hours for lunch at the mess hall. Many of us put on shorts and a t-shirt and packed a small overnight bag of stuff and left the base to play.
I put the top down on the "vette" and a good friend and I headed out the gate. We had a 5th of whiskey stuffed under the passenger seat and stopped at a local gas station for a package of Oreo cookies and a quart of milk for lunch.
Topped the car off with gas and headed out sharing milk and cookies. If we did not cruise too much while at our destination, one tank of gas would get us there and back. Important because we could then go broke having a good time.
There were dry counties on our roads and we never knew where. On one such weekend journey, we got caught in a "stop all vehicles" checkpoint. We pulled over as the old southern Sherriff checked vehicles ahead of us. When he got to us we identified ourselves as cadets out of Ft. Rucker and were heading to Panama City for the weekend. "What's in the milk jug, son?"
"Milk, sir." We offered it to him for inspection over the bag of half-eaten Oreo cookies. And sure enough, the boys were drinking milk and eating Oreo cookies. He stepped aside and waved us out of the line wishing a good/safe weekend trip. We were the only car exiting that lineup.
We laughed out loud most the rest of that drive that day. The 5th of whiskey came out when we landed in Panama City. It was a very good lesson.
The Beach Party was a club/bar/dance hall located directedly on the beach. Opened at noon or so and stayed open till midnight/one o'clock. The drinking commenced at noon and the music started late afternoon. Live bands, rock and roll and there was no place like it before in my life. I was smart enough to soak up every living weekend there with friends that I could. And even then, there was not enough time.
I met a very nice gal from Tallahassee one weekend early on and she turned heads riding in that red Corvette. We had a wonderful time together to the point she invited me down for a few days after graduation. But time was short and getting home to Washington state for those few weeks before going to Vietnam was a mandate. We said we would keep in touch but, never did.
The Beach Party was a world of it's own. One of the airline stewardess schools would drop off the gals attending those courses for a Saturday afternoon and early evening. The gals had to be back to their quarters by midnight Saturday or would be kicked out of their program.
There was just enough time to party and dance. And there were plenty of young guys and gals to go around. It was just plain old fun, teenagers dancing the night away, barefoot in the sand to the world's best-ever live music. I never saw nor heard of anyone getting stupid, guys or gals. But we may have come close.
Dancing the nights away to live rock and roll music on the warm beech sands of Panama City was an end game in and of itself.
When all was said and done, at the end of the evening, the beach outside would be lined with bodies covered in blankets for a night's sleep on the warm sand. I found a way to sleep in the Corvette parked outside the club.
The Beech Party is but a story now. Most likely remembered by a few older gals and guys who found that club during the times of their lives. My guess is it the memories are still followed by smiles. It was a great time in trouble times.
................
SAILING UMA....to a ghost town in Russia
Normal days for my wife start early - 3:30/4:00 AM. I/we have had a good night's rest by then and both love the quiet of the morning. The only sound is tick-tock of the AA battery operated clock on the kitchen wall. The coffee pot completed gurgling out our first cups of coffee into the pot. The gas fireplace is lit as winter sets in.
We both read a series of blogs and when I am done, I head to YouTube.
I have followed several couples sailing around the world for several years. Most any video of someone playing on the water with boats draws my attention. The couple "SAILING UMA" are folks I check-in on from time to time. This particular video title caught my eye and has proven to be one of the very best video sailing adventures I have ever seen. These early morning hours provides the time to crawl into a video like this.
The subject matter, the photography/videography/editing, the sailing, abandoned town and their presentation of the days adventure....then the last 4 minutes.
The last 4 minutes..............no, do not just go there without spending at least some time in that first half hour from the start. Get to know the story/days adventure and spend at least 10 minutes with this sailing couple first....paaaahlease!! Then, if you must,  go to the 30-minute mark, watch and turn up the sound.
A ghost town Russia.
...................... 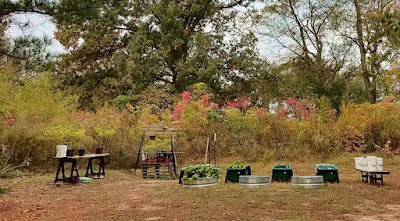 FALL COLORS linger here. Not big splashes of color, rather, random tossed color against an east Texas smattering of trees and scrub brush. Simplicity in a typical landscape surrounded by fields with homes tucked in.
The garden is still producing peppers although they struggle now to  ripen as temperatures cool.
Beets are growing and more need time to grow larger. Lettuce and spinach, poorly planted, grow and survive in spite of my lack of attention to proper seeding. This weekend offers fresh lettuce for baloney sandwiches and small spinach salads with dinner. Picking only what we will eat extends the crop.
Two lemon trees produced 7 lemons. I found out too late how the bugs love that baby lemon that pops out when the flower leaves drop off. I will cover with netting next season. The lemons I have harvested are sopping wet with juice when cut. Nothing like store-bought. A reason to improve my understanding of growing these fruit trees. If others can, so can I.
...................
ROASTING PEANUTS 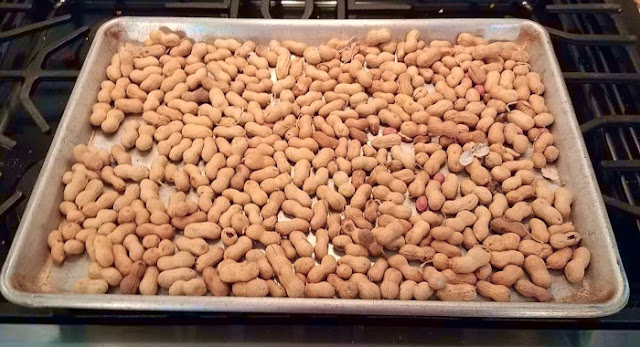 Bulk Tennessee Red Valencia and Spanish peanuts are in now at the local feed store. Another seasonal for feed and roasting. We were gifted a few bags from local friends last year. They had roasted the peanuts and brought over a paper sack full.
So what!! No one in my lifetime has ever brought over fresh home roasted peanuts. Peanuts always came from the lower shelves at the grocery store and I never ever gave peanuts a thought beyond that. If local feed stores ever offered this, I never knew nor had reason/interest to purchase. But here in Texas, bulk fresh peanuts  are another seasonal crop that passes through local stores.
Two and half pounds of the small Spanish peanuts scooped out of a hundred pound bag: $7.00. Roast 45 minutes at 300 degrees. Turn once. Filled a large clear plastic jar with home-roasted peanuts because I could. More importantly, I wanted to learn the process from purchase to roasting to storing. And yes, eating.
Are they better? I am not sure. Would have to do a side-by-side test and I am too lazy to do that. The Spanish peanuts are smaller in size and the kitchen smelled of peanuts roasting over an op in the oven. An upside. They are fresh and full of flavor and gift-worthy.
I roasted the peanuts because I have never done this before. Seemed like a good time to learn and I had fun. Yep, fun!!
...................
THE VAX  a personal opinion, shared from VOX POP0LI.
.................
AMERICA
I think the wheels are falling off. I turn my back and purposely find chores to help me ignore media and find ways of moving through each day without being swept into the lies presented in most every nook and cranny. It all appears to me that my America is under heavy attack and all of this may soon be coming home to our front doors. If the elephant is not in the room yet................
To piss and moan and walk in constant quicksand of complaining while looking down the road for someone to do something is not a platform from which I want to write each week. I fight this. Have said that before and you will hear it again.
I have voiced that I fought my war. Stepped up and walked straight into it. My other choice was to run north but I would have spent my years running and this was no way to live for me. No future.
Age teaches me to be patient, but that may be yesterday thinking. Yet patience provides and may clearly define the reality of "the after" that is ahead of us. I do not know and refrain from giving advice. Not knowing is grit in my machine.
One constant is and has been appreciating your weekly visit. Thank you.