Found marked down kebabs at the market store early last week. Half-price. Beef and chicken. Looked fresh and took a chance. Wellllllllllll!! Just under 20 minutes and they were a full meal deal. No muss, no fuss. Grilled meat with all our vegetables.

I have never been a fan of making kebabs. All the cutting, prepping, poking and so forth. But when someone else makes them, wraps them and then cuts the cost in half, seems I would be a fool not to give 'em a go.

Drizzled the chicken kebabs with honey and coated the beef several times, on the grill, with olive oil. When her does not talk at the dinner table and eyes my chicken kebabs, I knew I had a  "winner winner kebab dinner." 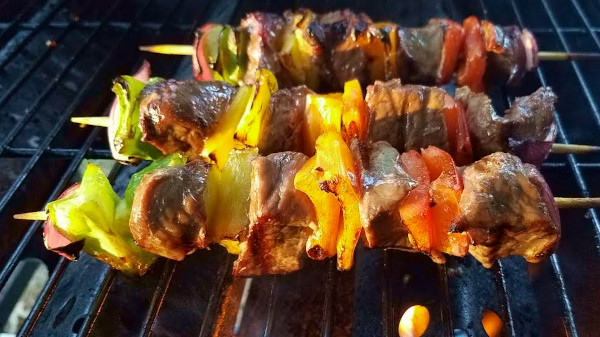 and then...Her goes to the store the morning of the day before Thanksgiving. Before leaving, she said; "poke the turkey." I did and it appears to be on the thaw. Twenty-four hours left.
Off to the store for just two celery hearts. Had one in the fridge, but with soup planned and a large pot of dressing, best to be safe. Walking in the door a half hour later she said she got the last stalk of celery in the store. She said there was big hole of nothing on the end wall of the produce section. No more trucks that day either.
Everyone needs celery on Thanksgiving. Everyone cooking a turkey and side dishes. But, no more celery for you!
Then she brings out two items wrapped in black packing paper. She found another kebab deal. Beef and teriyaki Chicken. "They were on sale." Pointed to the price. I wrapped my arms around her and told her that she was now pre-forgiven for any/all her mis-doings for the rest of the day. A kiss on the cheek to cement my sincerity. Winner, winner!!
..............

Lets put the kids, the dog and mom in the front seat, without life jackets and head out through the Haulover inlet. The gal in the video first boat was no snowflake. It only gets better.

Men with skill sets having fun. 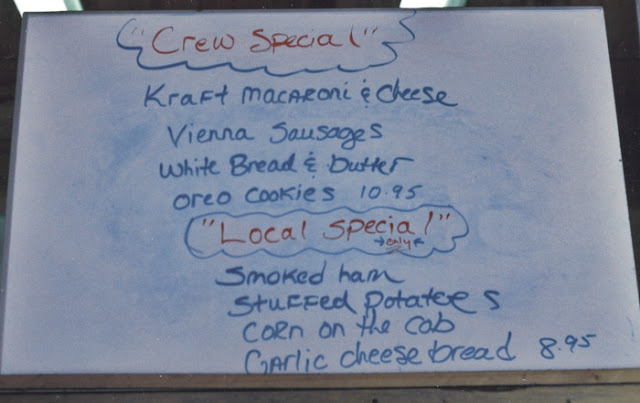 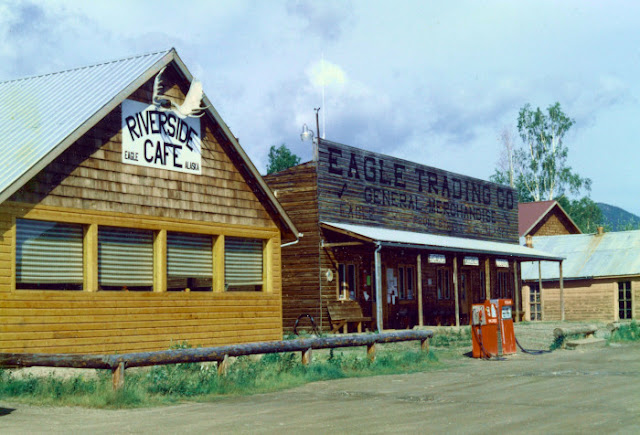 I was flying over this plane and pilot one day on my way to drop off geologists at a near by ridge line. I flew several small circles over him as we watched the pilot making low passes over a gravel bar he wanted to land on. On each pass he mowed down the scrub brush with the propeller, making a safe landing and take off strip. The pilot later told me that all of that was fairly normal in his flying of hunters in and out of the wild. 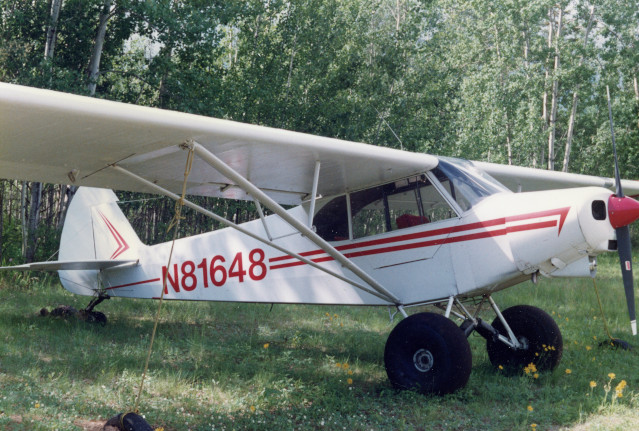 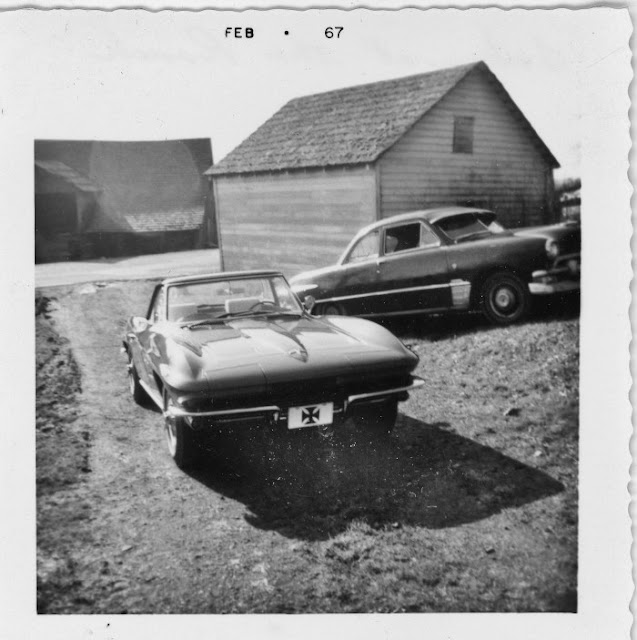 MY RIDE THAT YEAR 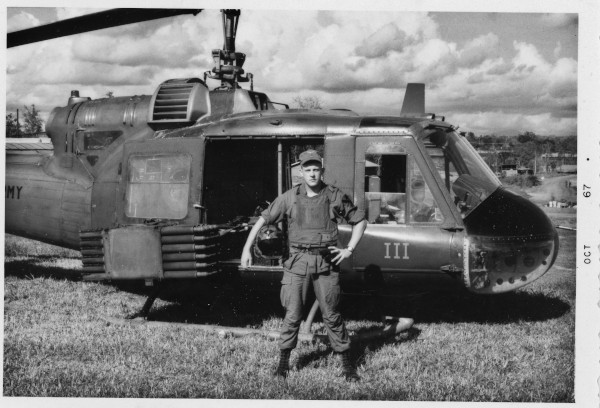 ..............
MY MOTHER'S SISTER STANDING IN FRONT OF A 1947 DODGE COUPE.
A rare photo find as the home behind is reminiscent of the stories my folks told of the old homes they purchased after leaving Seattle. My mother always mentioned all the black berry vines they had to remove and the old chicken house on the side they had to take down. And here it is.
Brother-in-law asked me yesterday what my dad and I had of mutual interests as I grew up. One of those interests was cars. My father always tried to have one of the newest cars out and loved driving and taking care of it. I grew up helping and of course have to this day yearn for old cars to play with. 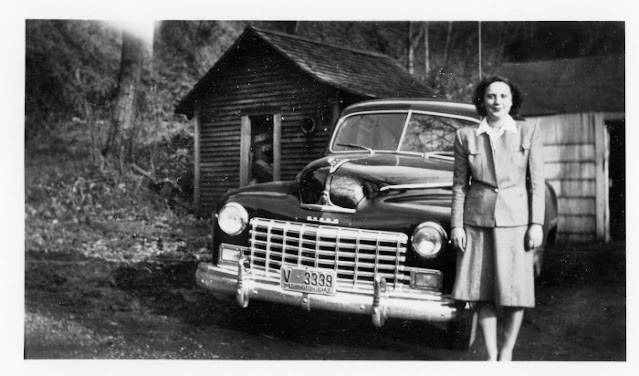 .............
A short post this week. I am covering a lot of ground now scanning old photos, negatives and color slides. The Vietnam photos are all scanned. Other old boxes of photos are pulled out at random and being scanned. I am realizing that my parents enjoyed photography and mom kept anything and everything regarding the family. Fortunately, all of her work was not lost and kept close as I have moved and life has changed.
Many of the older photos are friends of my elders in their younger years and before me. I do not recognize many of them but do love the old black and white photography. And with in that, these people have passed through my history.
Example: 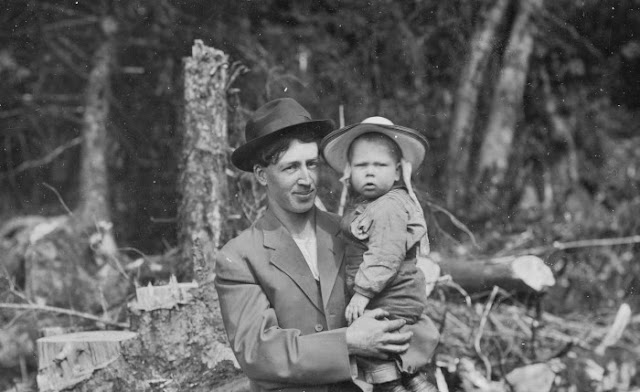 This is a post card. I have found others like this of family and friends. Apparently folks could get a family photo made into mailable post cards. Add a note on the back and send it through the mail. It appears to me that this photo was taken on a logging job site. A father and his son. Most all photos show family and friends and activities. Good simple moments in time that can stand on the merit of the photography and still be shared.
...............
Turkey and all the leftovers gone for the most part. Black Friday passed quickly and all we know is what others who ventured out said of the lines not moving and crowds. No thank you.
For the very first time in her life, wife has a Christmas tree covered in lights, on a timer and sitting on the front porch. Large boxes of decorations are down and I have promised to be "the good husband" helping, not complaining. So far, so good, but it is early.
After this post goes up, the first batch of oatmeal cookies with nuts and cranberries will hit the cooling racks. "I love the smell of cookies in the morning."
December 2021. Where in the hell has the year gone?
Thanks for stopping by this week. I appreciate.
Posted by ymata at 4:10 AM