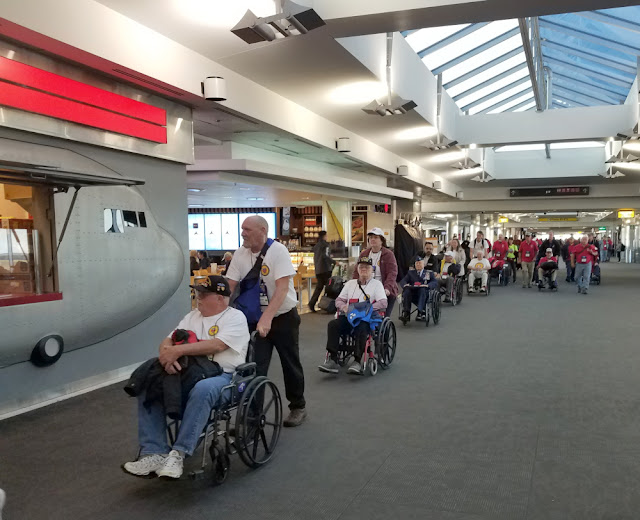 A week and a half in Texas visiting family and friends was the first vacation for my wife and me in several years.

Our first layover in Baltimore, after a quick hour and half flight, found us walking the terminal looking for breakfast. Off in the distance, I heard a bell ring to what appeared for each passenger getting off another flight arrival. The distance down the corridor was too far to know, though.

Soon, older fellows dressed in the same color shirts started to pass our locations. Most were wearing veterans hats and shirts. I learned the arrival of these men was an honor flight of older veterans coming to the memorials in Washington DC. I was reminded of my wife's father, a WWII veteran, and the honor flights of a few years back when these men were treated to free flights and all of the services to get to the war memorial for a visit along with other planned activities.

Volunteers clapped as each older man passed by our location and each were thanked for their service. The long corridor had many volunteers helping these men move along and all proudly applauded each and every one. "Thank you for your service" Many other airport travelers also joined in.
I thought I was again watching WWII veterans but realized that there were not many of these men still alive and able to make a trip like this. And like a brick it hit me, these were my boys.  My men, my brothers, my war. They were the ones all of this was about and all were being so highly recognized by everyday folks. It has been over 50 years now. A great big lump in my throat and tears in my eyes. It was a most wonderful surprise for the beginning of this vacation.

Several other honor flights were also arriving. I learned that some of these groups get a police escort all the way to the Wall and Korean Memorial.
.................. 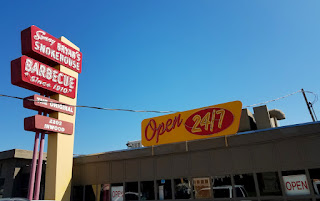 A few hours later we arrived in Dallas and shirt sleeve weather. After gathering our luggage, we were quickly whisked away by brother in law and his wife 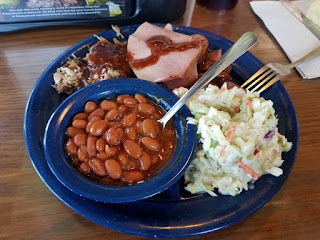 Within a few minutes we were parked in front of Sonny Bryan's Smokehouse Barbecue. One of Dallas's landmark restaurants  dating back to 1910.

We have eaten here before and always look forward to this as one of our restaurant stops when visiting family in Dallas.

It was reported that the tornado that passed through Sunday evening (10-20-19) had touched down 9 to 10 times. The pictures below were taken a few days later when we drove by edges of some of the damage.

We had taken a family drive into eastern Texas that day visiting family friends and sightseeing. On the drive home at sunset, we could see the storm building but gave it no more thought than any other thunderstorm passing over the city. We arrived back home in Dallas just as the first rain and wind from the storm hit.

I was exhausted from jet lag, little sleep and welcomed an early bed time. No sooner had I fallen deep asleep I was quickly awakened by my wife shaking me, telling me that I need to get up and get with the family in the tornado storm shelter. Sirens and tornado warning phone apps indicated that immediate urgency in our location.

Brother-in-law was adamant that we get into the shelter as he herded us into the garage and down inside the shelter. It was the first time I had ever seen him so concerned in voice and action.

A few minutes later, we were settled, sirens screaming outside, cell phones in hand monitoring other family and vice versa. When he started to slide the metal lid shutting us in, I spoke up. "Do not lock me inside this underground box." I was not mad, but this is one of my fears in life. Always has been. I would rather take the consequences of a storm like that, than being locked in a metal box underground. Simple as that.

He did accommodate my fears, leaving the lid open enough to see up and out. Had the storm hit his house, he would have closed that lid regardless.

For 15 minutes, I bit my lower lip, holding my fears inside, watching, listening and trying to be a good guest whom he was protecting with every inch of his being. I appreciated his position protecting the family while accommodating my fears.  I was sorry to put that added pressure on him, but the moment and my fear won out.

The all-clear was given, the tornado had passed us moving north east. The metal lid was full opened and we individually climbed out of the shelter.

The aftermaths of the storm were eye-opening for me in the damage caused through much of the town of Dallas. All family members were accounted for along with close friends. For the next hour, cell phone calling and texting found everyone in brother-in-laws circle of life safe as well. 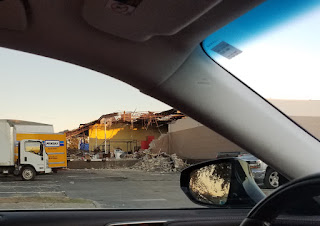 The storm had come within 2 blocks of his home. Close enough to warrant the actions and behaviors of getting everyone into a shelter.

For me a first. I appreciated it then and more so now as I look back having seen some of the damage. In all honesty, I had no clue to the quickness of a passing tornado and the immediate urgency with which folks need to act.  I also did not fully realize the severity of a tornado touching down. 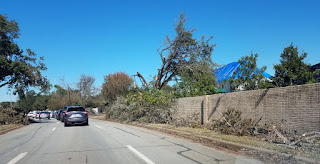 These late afternoon photos show just some of the damage. 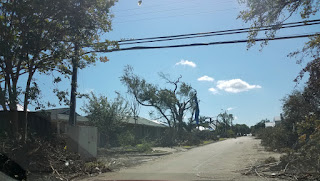 Driving through portions of these neighborhoods showed homes covered with tarps and trees down on both sides of the streets.

These photos were taken a week after the storm passed and it was apparent that the neighborhoods, families and city of Dallas had their work cut out getting debris removed and a handle on repairs. A few homes we saw were unlivable. 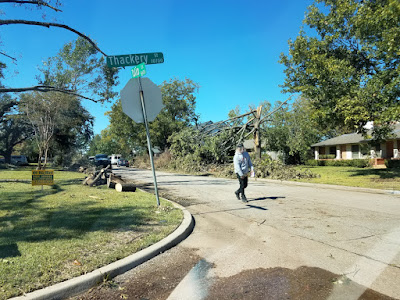 I took this photo below as we toured around the local area on the day of our arrival. The neighborhoods where my brother-in-law and sister (my wife) grew up.

I asked him specifically to stop as I rarely see construction sites like this and especially at the standing completion of the framing build. 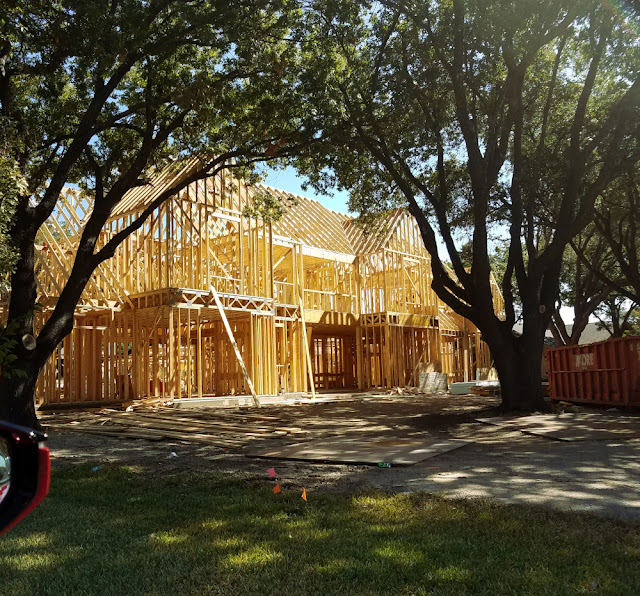 Brother-in-law just sent these photos of that same home. The houses on either side of this new home being built received very little damage. 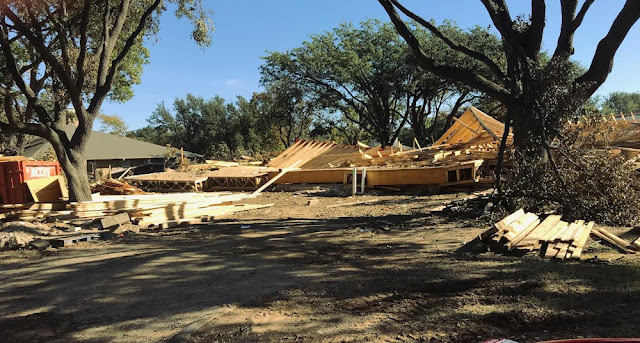 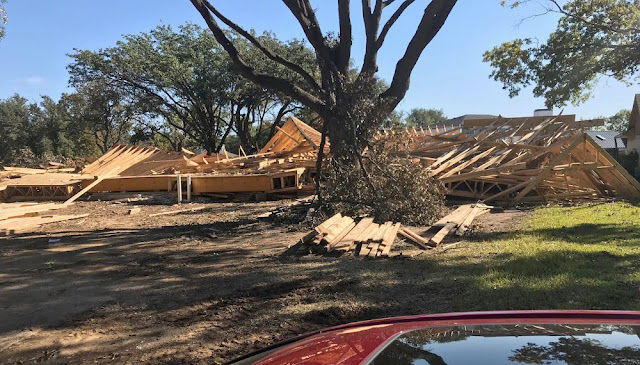 I cannot imagine what the new homeowner and builder must have thought at arriving and seeing this destruction after the storm. 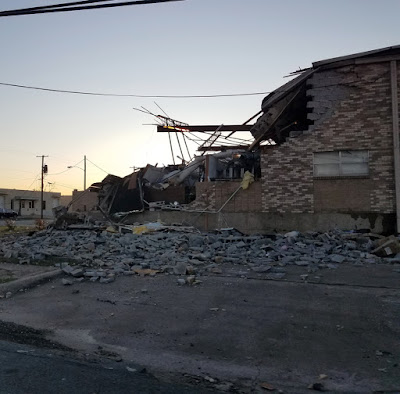 FROM THE PINEY WOODS 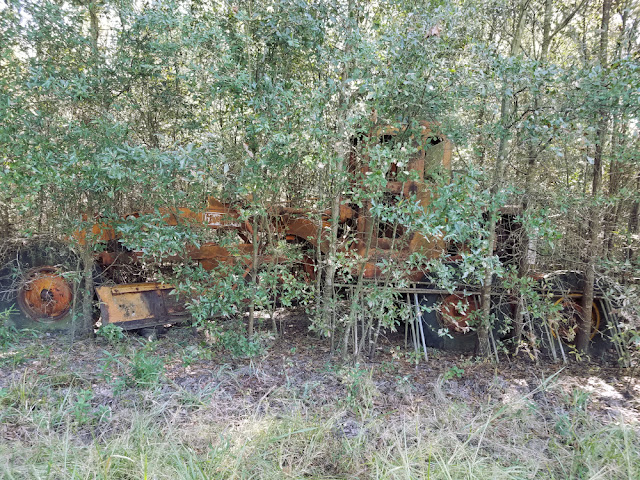 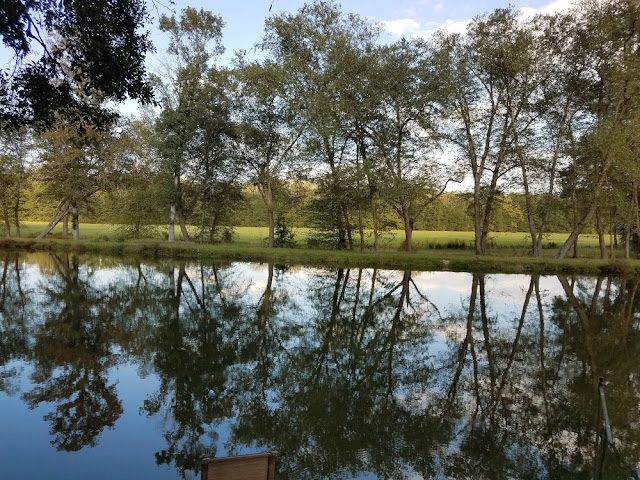 Two pictures above taken earlier the day of the tornado in the Piney Woods about 90 miles east of Dallas.

An older tractor nearly obscured by overgrowth and a late afternoon reflection of trees on a large pond.

Close friends and I often describe the ups and downs of daily living as "sometimes you eat the bears and sometimes the bear eats you." I am not sure who started that saying so many years ago.

In the case now, back on the hill in New Hampshire, the bear flat out wins every battle when it comes to my long term wanting to feed the birds.

From now on, I am just going to throw seed and feed on the old picnic table near by and am also throwing in the towel. 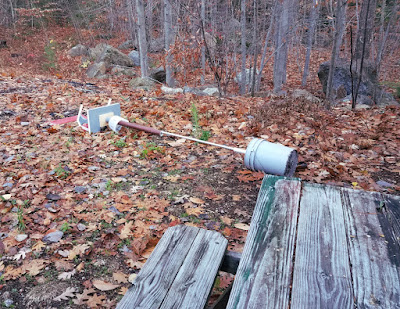 Winter is coming once again. Time for wood fires and a pot of soup on the simmer. First snows forecasted the end of next week.

Thanks for another visit this week.