Over 50 years now and I have told many of the old stories, maybe too often. I find now that looking at some of the old slides and photos bring back instances and memories.
As I write this morning, in memory of a few of these years in my early 20's and in respect/honor for all Veteran's this coming Veterans' day, I find the visiting of these times as honorable as the days flying in support of our ground troops during 1967. 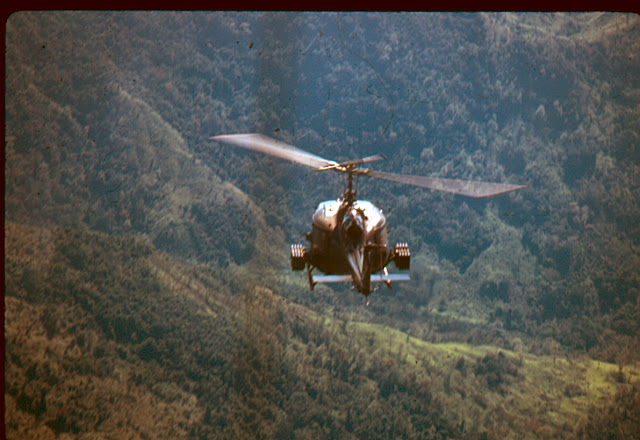 A free-fire mission in the An Loa Valley, Central Highlands, Vietnam, early 1967. 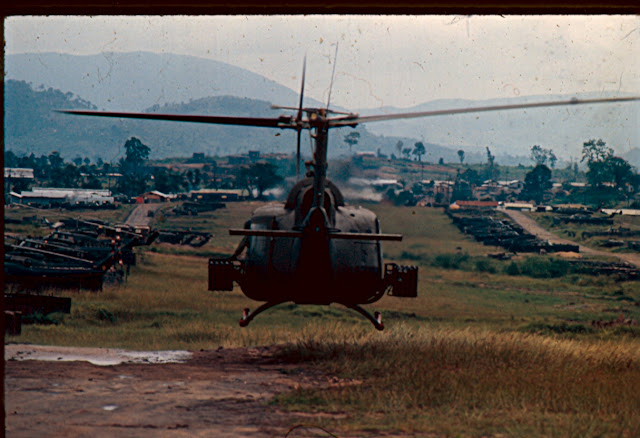 One of our helicopters picking up to a hover at the "Golf Course" at the 1st Air Cav's base in An Khe. The helicopters were flying at max gross weight and would actually sink down into the lower grass field in front of this helicopter on take off before forward flight aerodynamics efficiency would kick in and the helicopter would rise in a take off climb. I was flying with the 2nd of the 20th Aerial Rocket Artillery, 1967. 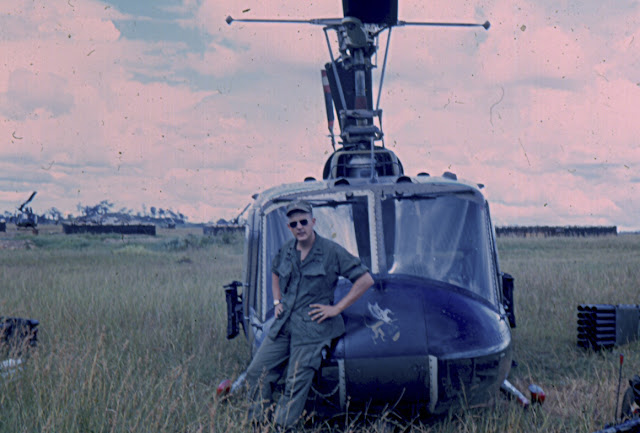 Tail rotor failure at a hover the night before. Three complete fuselage rotations before the pilot and I lowered the collective, hitting the ground level and spreading the skids. Crew chief had a minor back injury. We considered this a successful landing with full tail rotor failure at night. Come to find out, the  bearings had been installed backwards inside the tail rotor assembly.

To add insult to injury, we were put into another helicopter that night to finish our night flight rotation.

This was one of two tail rotor failures while flying combat in Vietnam.

The second was in a Cobra and on that one I made a run on landing at an Air Force base w/o incident. No sooner had the blades stopped rotating, an air force pick up truck pulled up and handed the co-pilot me an ice cold Coca Cola with cap removed.

We did our damnedest to try to stay there on the Air Force base with the Cobra for a few days, but we were transported back "home" later that day.

Last weeks post about getting in an underground storm shelter for protection against a possible direct hit from the passing tornado in Dallas a few weeks ago, prompts a couple photos from a standing shelter we saw during our visit. 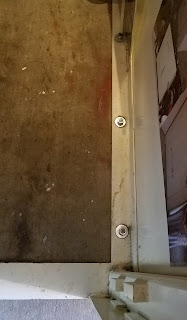 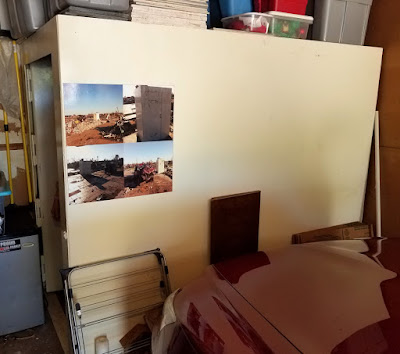 This would be my preference as opposed to being underground.

Final Dallas story is about shooting skeet. I can't.

Brother-in-law and his closest friend invited me along for a Sunday skeet shoot about 45 miles north of Dallas proper. I was just happy to go along and play with the boys. Getting a round of skeet shooting would be a bonus.

The range was set up for serious shooters. Most all of the fellows shooting there were also bird hunters. A day of shooting sports along with maintaining hunting skill sets.

I watched a group of 5 shoot around the half-circle shooting stations between a high house and a low house that throws the skeets. Brother-in-law took me aside to load and shoot the 20 gauge shotgun. Any new shooter is always brought into the unfamiliar fold of shooters with safety lessons and practice.

Our group of threes turn came up and we assumed the course. Individually, we took the shooting stand. Loaded 2 shells into the shotguns and assumed our stance. Yelling "pull" brought the high skeet first and then a second "pull" would bring the low skeet from across the circle towards us.

I hit the first skeet like a pro. I should have up and quit observing how easy this was going to be. Save my shoulders and all of that. Of course this is not a real  option. Just for story telling.

Twenty-two out of twenty-four of my skeet lived. Yep, I only hit two. Easy to count. And of course I had excuses. Several.  I made all of the common mistakes a newcomer does and was most likely better at making those mistakes than most. The birds of Texas are forever safe near my blind.

One round was enough for me. Shoulders, you know! I watched brother- in-law and friend each kill their next 48 skeets without issue.

All in all, it was a boys' day out telling stories, playing with guns, running a hunting dog and grabbing BBQ on the way home.