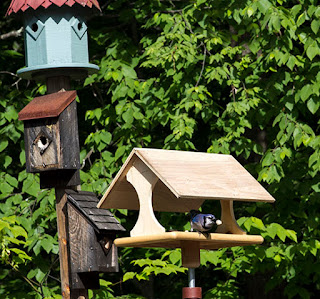 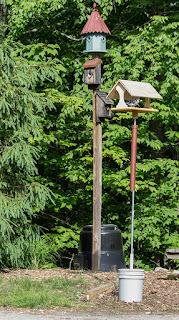 Working squirrel-proof bird feeder up and running. Followed several ideas from YouTube videos. Two bags of quick dry cement holding a short PVC tube in a 5 gallon bucket. One-inch conduit cut to 7', three-inch PVC pipe with cap hanging on a short nail drilled and placed through the conduit. It is squirrel-proof but not bear-proof. Because the bear is due through here at least two more times before winter sets in, time will tell the fate of the new bird feeder. 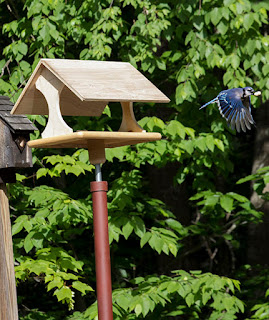 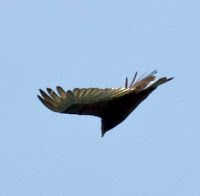 While I was sitting and taking these photos, a hawk flew over the house and circled twice. I took a quick shot of the bird before it disappeared over the garage roof.

No surprise that during the several circling over flights, not a small creature could be seen any where here. They went dark and quiet instantly. I suppose we are a target-rich environment for hawks.


***** Two weeks have passed and damn if the grey squirrels cannot climb the small brown PVC pipe. A light coat of Vaseline did the trick for a couple days, but a short, larger bell of 6" PVC at the top of the current one ought to be a final fix. 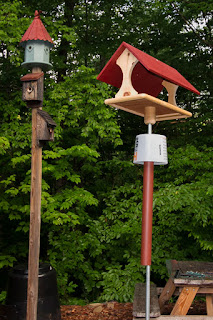 I am way behind on the learning curve on all this little drone can do. Way behind. The opportunity to follow my son around on a near by lake presented itself along with wide open spaces to practice.

Good practice for me but the drone was not properly set up nor did I have a video flight/photography plan. Son could not ride the jet ski for just a couple minutes in gentile wide circle so I could film (no, not his fault) but I did get some footage and ultimately realized how much homework I need to do learning basic camera and flight set-up.

I am still amazed at the technology, potential of aerial photography and flying a remote aircraft from a phone or table screen.

Here is the video.

A week behind in post and only excuse I have is that it is summer, outside play, going/coming and chores are taking precedence.

Officially summer now and the days are getting shorter. Yea, who needs to be reminded of that? Heads up and put the cell phone in your pocket.