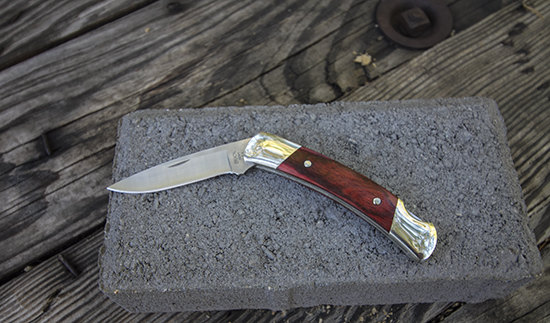 Nope, not promoting a brand but rather leading into rights of passage. To me, the Buck knife represents any small pocket knife young boys received early on to have and call their own.

Often given by the father or grandfather when the young boy showed sensibility to own a man's cutting tool. Moms were aware, too, that son was soon to receive his first pocket knife. I suppose a few band-aids were stowed in her purse as a matter of course. Come to think about it, band-aids always seemed to appear any time and anywhere someone cut themselves. Along with the first pocket knife came the first cut.

Pocket knives were not given out willy-nilly. Just because the young boy was of age to own his first knife was, in of itself, not enough.  He had to have been taught in earlier years whittling and use in the proper ways while in the company of elders.

The boy's first knife was rarely new out of the box. Most often a hand-me-down, long ago acquired or set aside for the moment. The knife had wear character as proof of worth and dependability. And most likely, the knife had been lent to the young boy earlier to whittle or carry with the elders on a trip into the woods. The young boy knew not that it was his knife and it was only time that had to play out before it could stay and be trusted in his pocket and daily travels. That first knife was no sharper than it had to be.

After several weeks had passed, dad or grandpa would ask to borrow said knife from the young boy.  The boy would reach in his pocket and hand his knife over to help with the tangled twine in the garden, or peel an apple fresh from the tree. Men shared their knives in the course of days' events.

These knives traveled to school, playgrounds and the back hills. Boys would compare and share such things as how to sharpen, throw, carve and cut. These knives were seen and used as tools in their young world. Has been an easy 65 years now since I received that first pocket knife.  Today, I cannot go through a man-store with out stopping at the knife aisle and shopping.  So hard not to purchase another knife from time to time for reasons I cannot justify. Nor can I just PASS a knife aisle. I am stopped for minutes by some unknown force that allows me browsing and wonderment.

My throw-and-go bag above has everything from soup to nuts and this Gerber hunting knife and sheath are attached to the shoulder strap. Most likely overkill for a knife, but if this is the only bag I can grab in an emergency moment, this knife will serve many purposes. It is razor-sharp and yep, there are band aids in the bag. Like yesterday when I was young, this knife is a tool.

I received the top-pictured Buck knife this week from brother-in-law in Texas. A gift. One of our recent discussions while walking down an aisle of knives together was remembering our first pocket knife. It is still a memory for both of us and he still carries a pocket knife like the one pictured at the top of this post.

This new Buck knife in a sheath replaces the slightly larger sheathed knife I carry. For every day carry, this little knife will prove just fine.

I HAVE A MESSAGE FOR YOU

I came across this in a post I read this past week. I think it cuts deeper in this old man than it may in younger folks. I do not know. But stories like this should be seen by everyone as it can become a life-saving reference to draw on, especially for the young worldwide.

My grandparents and parents came to this country, in part, fleeing for the safety of their lives and their future.  Trust me and Give yourself these 13 minutes. You will notice that this story is also worn on the face of the story teller. Stay with it till the end and share.


"A bit of kindness is more than worth it." Her gets credit for this quote.

Draw old friends closer this week and laugh. I appreciate your visit.