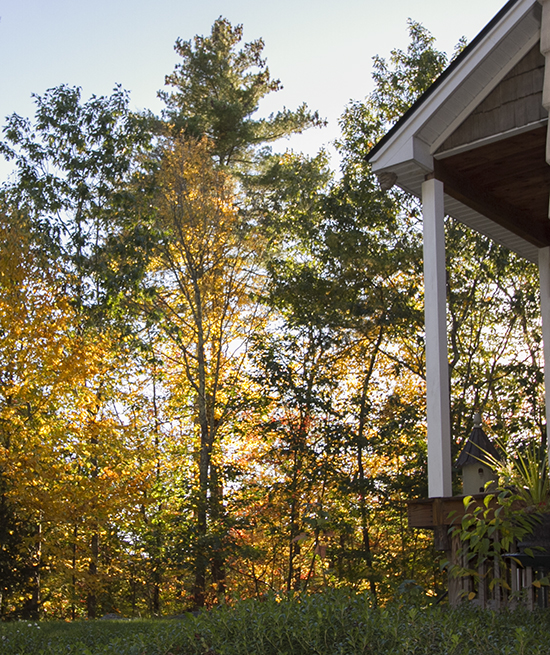 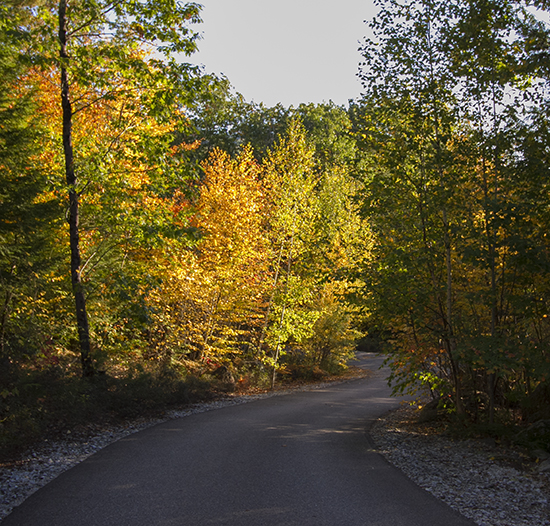 After dinner, sun was on the set this past week and these two photos are examples of country living painted by Mother Nature. The highways are lined with color that magnifies in direct sun and dims under passing clouds. It is a magnificent time of the season and leaf-peepers that are visiting now have timed their days perfectly.

As of this morning, and ready to publish, fall colors have gone. The dull color of  rust nestled among the green tells again another brief time in the on-going changing seasons. First dropping of temperatures to overnight freeze hints of cold coming. A week still blessed with wonderful cool nights changing to comfortable days that beg to be outside.

Hands are cold this morning typing final thoughts. Very early in the season for me to notice this.

Her and I drove to the coast the other night for a gathering of some friends. A simple invite to all to bring something to the dinner table, to look out over the bay as the sun sets and visit. It  was a longer drive, 90 minutes one way, for us than we are use to. Our state's highways are well maintained as compared to other states that border us. Traffic was heavy, but moving without issue. This ease of travel only changes a few miles of nearing other bordering metropolises. Once inside those envelopes, traffic slows to congestion and maintains that pace through out the immensity that is every big city.

We saw more people and traffic in this round trip than we have seen in a half-year of local travel. We concluded that we have unconsciously well-insulated ourselves. We have become used to the quiet of country living. We can dip our toes into the hustle bustle like we did that night and step out just as quickly. Our quiet most likely would drive the younger generations to migrate as the big city drives older folks to the quiet. The times of our lives.

It is difficult to blog w/o some thoughts and mentioning of the world around us. I repeat myself here and apologize for talking of the constant nagging of worldly catastrophes at our doorsteps.


NFL      multi-millionaires trying to have everything every way at the expense of a fan base that once loved you. A wanton desire to piss off and act out in childish tantrums w/o consequences. So, expect networks to no longer show national anthem?? Doubling down and other sports and teams taking a knee.

STORMS AND FIRES     Old news and downgraded to "B" roll.

NORTH KOREA      Hanging over our heads.

ONE MAN'S LIFE     Celebrities running for cover and apologizing for being constant assholes. This story ought to have enough energy to run one more week.

GUNS   OMG OMG. Disarm America again on the high. I recently saw a statistic that there are 80 guns for every 100 Americans. The parking lots were full this past week at local gun shops. Scream loudly with excess and the next day gun shops have lines waiting for the doors to open.

LOUDER DRUMS OF WAR     each week this news is pushed to the edges of our plates as a child pushes the last of the cold green peas. Still there and gotta be dealt with before leaving the table. War looms large when there seems no more possibilities of kicking the can down the road and onto the next administration to deal with.

But TODAY there is still freedom of thinking, travel, action and purchase.

WHY NOT SOUP NOW? 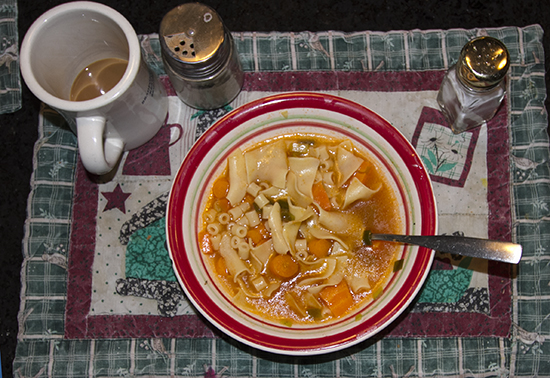 a wonderful warm up for a cool October lunch
30 minutes from start to serving
comfort food
No limits what can be tossed in soups like this. I used what I found in the fridge and the final carrots from the garden. I was also impatient, cold and hungry. 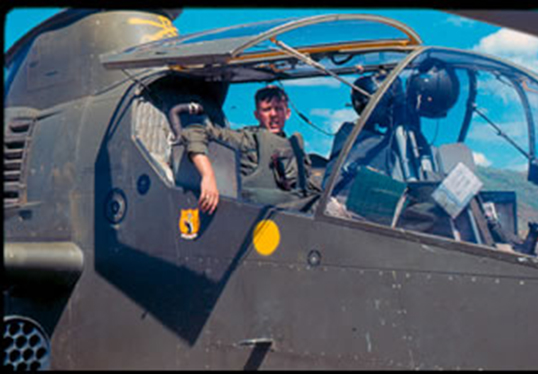 ONE THING FOR CERTAIN IN LIFE IS CHANGE

If I have told this story before, indulge me.

NOT OUR JOB TODAY

February or March of 1969. Second tour of duty and fairly new to the outfit. First missions were flying aircraft commander wing-man off of Cobra lead. Those first early missions found us out searching for trouble. Our flight gaggle was made up of a UH-1H command helicopter, two Cobra gun ships and two LOH (light observation helicopters). The two “Loachs" flew low and slow, looking for someone to shoot at them OR were flying low and slow re-conning areas of enemy intelligence reports.

A Major or Lt. Col in the command and control helicopter was in charge, gave the orders and led the missions. The Loachs marked targets and the Cobras brought in immediate fire suppression as called for. Single strike or multiple strikes.

If contact was heavy, six to a dozen lift ships with troops were not far away and could be inserted as required.

Home for dinner if all went well.

Those were the days when the war was changing and it was necessary for us to call for permission to return fire. Yep, when fired upon we could not return fire w/o calling for permission from higher up. I can still see a moment while inside the cockpit, several hundred feet off the ground and at speed. Looking at the ground passing under me, I looked at a tree line and knew that if I was fired upon, I could no longer return fire. The meanest gunship helicopter at the time reduced to scrap iron in the air by the politics of a changing war.

I should mention here that my first tour of duty was flying gunships for the 1st Air Cavalry out of An Khe, SVN. I was groomed that year to be a young combat pilot flying several enemy contact missions daily for a year. It was war flying and fighting like you might see in a war movie. So, I brought that mindset and experience with me to duty tour #2.

And so it was, going that day, searching for trouble.

The command and control helicopter called us all for landing in a nearby friendly zone to shut down and review the mission. He landed, followed by the two Loachs. As lead Cobra turned final approach, I received a call from a pinned-down group of GI's, maybe within 10-15 minutes flight time. I replied back to the call saying we had a fire team close by and had to land to report their need for our help.

This is what we did. This is who we were. We had the equipment and skill sets to clean up the mess they found themselves in.

I set the Cobra down in the dusty field, idled down, flipped open the canopy and ran to the commander. I told him that I had just received a call for help from a group of American troops pinned down and in a fire fight, just minutes from our location.

My expectations and previous experiences were to become airborne within minutes and on the way to do what we did best. And we were good; very good at all of that.

“That is not our job today” said the commander.

To this day, that response still stops me in my tracks. I cannot now and could not then wrap my head around that response. AND it was that exact moment when I finally grew up and fully grasped the futility of war from within our own ranks. Fighting the enemy was hard enough and fraught with challenges; but how do you fight the politics of war? How do you fight the utter stupidity of leadership, higher-ups and so forth. I knew not then and know not now.

I made a conscious decision that day that fighting and dying in Vietnam would never be worth it to my country. It would never be appreciated nor looked upon as for God and Country. Hard to put it into words, but I knew and better grasped the big picture missions becoming impossible from within. And as important, no one higher up had our backs if push came to shove.

When I returned to base, I looked into and opted for becoming an Instructor Pilot in the Huey Cobra. I was accepted, went through a weeks training and returned as a Cobra IP. I was assigned to the Headquarters company and spent the rest of tour of duty with shined boots, clean uniforms and milk runs. And for a few months of my life, I could execute a full emergency landing from altitude, land on a dime and give you 9 cents change. The Cobra and I were one.

After all of these years and the experiences of that day, I understand Benghazi. I get the stand down orders we see in the news of days past. I think I get the same things listening and looking at Las Vegas, gag orders and cloudy stories. Somewhere in the bowels of the decision making process, men - whose jobs are to fight a war or stop bad things from happening - are co-opted from within. It is not the war fighter or the first responders. They are there and always have been. Somewhere up the chain of command!! The enemy with-in.

Seasons are changing and Winter is Coming.  Be very happy with yourself, reach out a helping hand if called upon and watch your own back. I appreciate your visit this week.
Posted by ymata at 5:26 AM