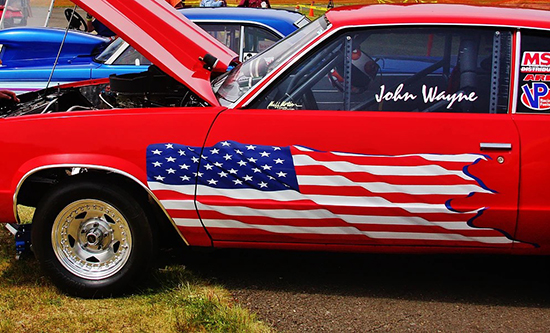 Our flag always turns my head. Touches places inside me.  It always has and always will.

I take the flag flying, painted on a race car as shown above or proudly shown on the side of a home or old barn, as a sign of healthy spaces. 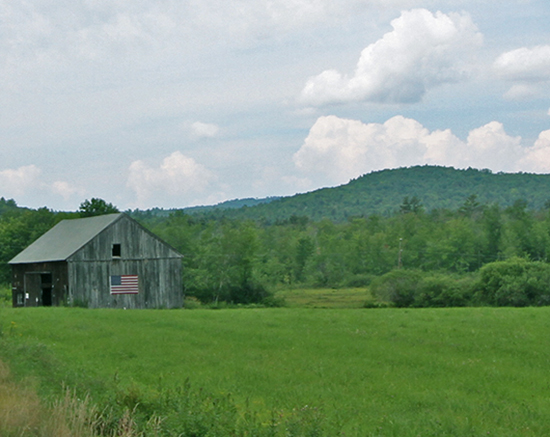 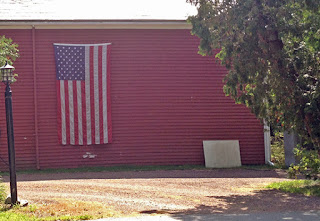 A flower pot on a driveway entrance with a small American Flag. A flag firmly pinned to a tree on a back dirt road. The flag painted or nailed to the side of an old barn is one of my favorites. Old barns draws me too. Maybe it is the history and the stories the old barn can tell. Maybe it is the roots of the family still living on that land that tells a story. I suppose, old man, old flag, old history, old school. 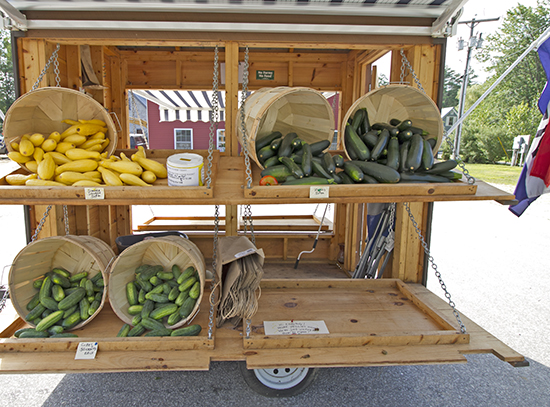 Local yellow squash, zucchini and cucumbers for $0.50 cents each. Pay in the little white can using the honor system. The little black sign in the top right back say "No Farms-No Food." And yes, folks stop by, pick up fresh produce throughout the day and the honor system for paying works. If it were not for our garden coming on now, I would have picked up a few here today. Fresh local corn will be next and flood these little stands for a few weeks. How many places these days where the honor system works?

I am finding a plethora of stories and the pushing of the HBO Television Series, "Game of Thrones". For me it means not much as neither her or I have watched this series. We have basic cable but have not stepped up to one of the major carriers of movies or made for TV series networks. They all want access to our credit cards and that is where we draw the line.

We miss the good stuff. "Deadwood", "Better Call Saul", "Justified", "Battlestar Galactica" and "Firefly".  We started with the first episodes of those series and then were not able to go without.  But "Game of Thrones" had flown under our radar.

Recently, I decided to learn more. Why a first season of 2.5 million viewership to this season with 25 million viewership? Why all the hype? Why the references and comments from many sites I visit? I paused long enough to do some reviews and look deeper into the story. Was it something we were missing? Was it worth an investment to purchase Season 1?

After the first two episodes this past week, I think we are in for the long haul. A good series must be started from the beginning and new viewers like us need to be patient enough to go the course w/o looking for spoilers and hints of past seasons. Have to do that.

Explicit and graphic and more to come. But; like Deadwood and Justified, graphic is ok if well written into the story and the times.  True to the peoples of that/those worlds, behaviors and mores of the era. Besides, there are dogs and dragons to come and we are fans of both.

If the grandeur of the filming seen in the first two episodes is also a hint of what is coming, then this, too, is worth our time. We are already adopting some favorite characters and disliking others. A mistake?

Another upside is that we are staying up later and not enduring the muck of cable television.

At time of publishing this weekend, GoT, seasons 2 and 3 rest, near the DVD player. Season 1 has us now. The writing, the story-telling and the acting is exceptional. Add two more fans this week to the twenty five million this season. We are acting like children on the edge of our seats. An addiction.

The last minute of the last episode of season one was worth the price of admission.

Will leave you this week with simple enjoyment. Lego engines blowing up. I think these guys would be fun to hang with.

Appreciate the visit this week.