THE ONE FOOT TSUNAMI

We listened to the radio and understood that the tsunami that was to hit the coastal shores of Washington State was significant and that there would be a visible wave entering the mouth of the harbor between Westport and Ocean Shores. The wave was to continue moving inland. The warning was explicit: “Do not go near the beach.” Mom and dad said, “Do not go to the beach.”

So, a friend and I hopped in the the '56 Chevy and headed towards the beach. Part of the highway paralleled the open bay and the channel inlet. We looked but saw nothing. At the corner where the road turned inland, we parked next to the shore line on the vehicle turn-out; there was room there to pull off and we were not in anyone's way. A good vantage point, standing on the roadside, to see “the wave.” 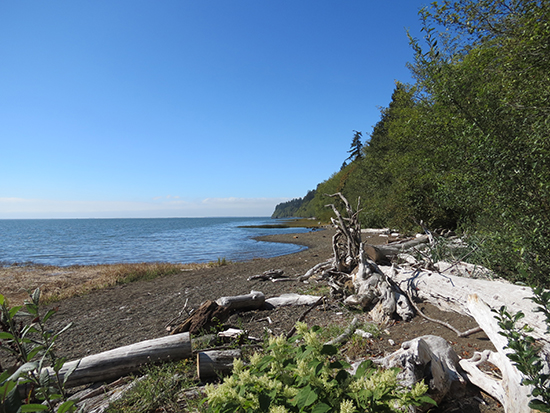 The Bay and shoreline (looking west) as it looks today

As we looked west, we noticed a dark line moving into the bay and through the mouth of the river. A dark, distinct, slow moving line. Within a few minutes, we could see the line becoming a noticeable, one-foot high rolling wave, moving about 10 mph. Faster than a person could walk or outrun. Although the photo above shows a high tide, the high tide on the day of the tsunami was up to the shoreline, running alongside the driftwood logs.

It did not take long to see the years of shoreline debris of old logs, stumps and wood gatherings being tossed around like torn paper tossed in the breeze. And, had the wave been much larger, we would not have had time enough to move us or the '56 to safety. But as quickly as it was upon us, it passed, continuing its assault on the shoreline.

The large logs, long ago wedged in place, were picked up, tossed and disgorged as the wave passed by. We were too stupid to even step further back onto the highway. Mesmerized, I suppose, by what we were seeing. Time had changed from minutes into seconds. In its wake, everything had been uprooted, rearranged and dumped unceremoniously in the eddies and mini-currents left behind. The wave slowly became a swell as it continued inland to narrowing shorelines and calmer water.

My friend and I commented on the power of that one-foot wave as it passed us. To see years of leftovers from natural tides and Mother Nature tossed about at will from the power of that one foot wave impressed us. It impressed me. We saw it coming, had no idea as to its power and were shocked at the complete rearrangement of that shoreline after it passed. Without a doubt, the radio and my parents were right - that little wave would have injured anyone caught that afternoon on that beach.

We learned later that the wave that hit the ocean coastline that day was three and a half feet and contained enough energy to push through the channel inlet and maintain the one-foot wave miles inland towards town.

Today, there are folks purporting to see the next tsunami on our far horizon. Many of them are sending us cautions and warnings. They tell us that it is a large, dark line slowly moving our way. They tell us to find high ground and do not go to the beach or low lands. They recommend we act now under our own power and fortitude to prepare and protect.

A close friend of ours tells us that he has two weeks vacation now and is spending a good part of his time preparing for winter. He has family and lives in a typical small town and neighborhood. We have had several talks and visits over the past years and talked of many things under the sun. Some of those talks were of tomorrows and things that could happen in the coming years. But now we feel an urgency to keep a constant eye open to the horizon. To think also of local high grounds and better places to see the wave move through. A safe place to watch the after-eddies and currents. It feels now those years have turned into weeks.

We have history on our side to help teach us of tomorrow. Always have. Even history that is just months old shows us what can soon be at our feet. On this day we have more sources of information to look at than we will ever have time to consume. Much of that information is misinformation, though. We need to learn filtering, better thinking for ourselves and come to grips with what we really have control over.

We have friends, family and an inherent desire to offer help and also be open to help.  Our strength lies in our likenesses, not our differences. We can step back a little bit and look at a bigger picture. If we do, will see there we are all in the same boat, just some of us rowing different strokes, against a tide and without common purposes and directions. But no wave in the world can move us if we stand together. Not only does this sound good, it is true.

We may want to take a knee, throw our hands in the air, demand that life be fair, giving special consideration to those insist on it.  Some people are simply not aware. Perhaps the moving line on the horizon knows they are not really obstacles but that they will give in and allow a quicker and deeper inundation.  But the truth is that the line on our collective horizon doesn't give a rat's ass about about how we feel and won't care what we think or feel.

My gut tells me to do the little things I have been putting off and to no longer pay attention to my thinking there is still time.

Ten days ago, the bride said that there was a break in a main pipe line down south and that there may be a disruption in gas supply along the I-95 corridor.  Also would mean a disruption in goods and services. This had just happened and  the event was in its infancy. I did a little research.

I told her that I was heading to town to top off the tank. Quite awhile ago, we adopted the half-tank is an empty-tank philosophy so, we try to adhere to filling up the tanks when the gauge reaches half. She asked if I was nervous and I said "no." But this is what part of our plan is. Should something out of the ordinary start somewhere and there is a chance it will advance to us, we will do this and do that. I was doing "this" more for practice and being true to some of our plans. I also topped off the little rat car. It took no more than a half hour do to both. Nothing out of the ordinary that day at local gas stations. Prices still low.

I also sent out emails and texts to friends saying for them to check out the story and top off. Also part of our plan and a little time well spent.

Today, the leak has risen to 330K gallons from the original report of 250K gallons.  Now, folks closer to the event site are experiencing considerably higher prices/ shortages and closed pumps. Ten days and future possible problems, initially reported, have come to be today. Panic buying and no product available.

So, a wave starts in Alabama. We can see it and know it may come all the way up the east coast. The media has a hold of this now and may blow it all out of proportion. Expect some misinformation and hype.

"Shocked!!" are the headlines of this past weekend. I am not shocked. I asked the bride if she was shocked. She said she was not. So who is shocked by acts of terrorism (oops) in the homeland? Several photos of the "perp" and an American Chicken joint as a background for people walking around all day. Leaders of the people, from the top down selling us goods. Which reminds me.

The sky is not "plaid." No matter who, what, when or why folks, the sky is not "plaid." You and I can walk outside at any given hour and see it for ourselves. Blue background, wisps of cloud cover with hazed orange light rising.  (This morning there is no sky, just white.) I return to the kitchen and damn if I am not told again that the sky is plaid and not to question the report/reporters nor to seek the truth. The snow flakes and teleprompter readers poking Chicken Little.

Best we keep an eye on the horizon.