Going to try to publish on Sundays. But as soon as I set out a rule, I break it. We'll see.

Stories of shootings, killings, stabbing, bombing, injured people and problems of color in the news for months now.  More and more folks talking about; “what is it going to take for me to protect myself and my family?” to how and when something like this may come about. To take another's life will be a life changing decision, can never be undone and not one to be considered lightly. To be cornered and the only action left in the box of choices is to take a life to protect a life, is not something I thought I would ever have to deal with or ever discuss again.

I plan never to run to a gun fight. I will never shoot anyone stealing from me nor ever shoot a man in the back. Never. I will stand and protect to the best of my ability my life, wife, family and innocence. I think the line in the sand for this kind of decision making and action will the be a last chance choice and the go/no go decision will be clear. I do not dwell on this but have tried to strongly build how I will act, as best I can, ahead of time. Face to face taking another life; do not really know if I can do this. But this being said, I will never live on my knees. I will choose to go out full burner with boots on. “Men will die for the same things they live for.” Cannot remember where I read this.

Awhile ago, I sat down with my wife and said that there was something I needed to tell her. We do not do this often.  Always means that something of deeper importance is going to be discussed. I told her that should the moment come when there is not time to talk and something bad happens, that I want to her to always know that I love her deeply and w/o constraints.  I wanted her to know that in case I cannot tell her that in an end. She told me the same in return and it was a hard, heavy and teary eyed morning conversation. But it is said now.

The combat missions I flew in 1966/1967 (800+) were in support of our boys on the ground. We were aerial artillery and called in to support their gun fights on the ground. We contacted the units' forward observer en route. The FO gave us friendlies location, the enemy location and situation report. From nearly being overrun to having engaged a larger enemy force, we cleared many an entrenched enemy for the boys. The men I flew with were surgical in our ability to deliver high explosive rockets and machine gun support within meters of our boys on the ground. We did that daily and with excellent success. It was war. 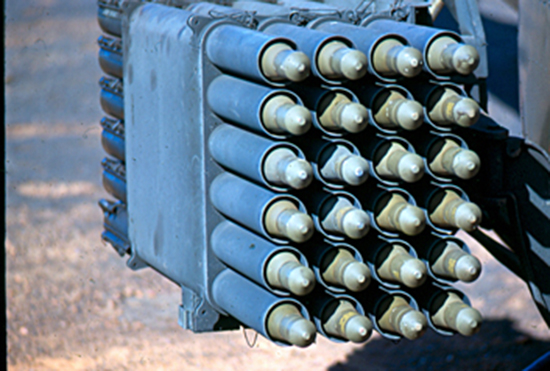 It was normal for war aircraft and crews to be given free fire zones. And free fire zone was exactly what it says. Free fire on anything/anyone caught in the zone defined by a rectangular grid zone (2000 meters by 4000 meters for example) and a set of coordinates. "Intel" indicated that all were combatants in that zone. In other words, mission protocol gave us permission to kill on sight anything/anyone. It was war. 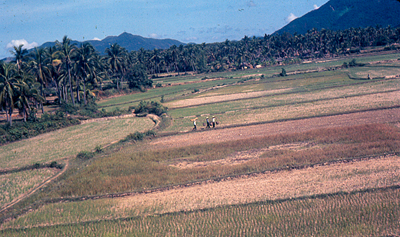 Typical low level flying and Vietnamese on Rice Paddy Dikes
On one such mission, my team came upon a single man walking on a rice paddy dike, wearing black pajamas. Black pajamas was what the enemy wore. Vietnamese wore black pajamas. The Air craft commander in the other helicopter also confirmed that the man was indeed inside the free fire zone. We always always went out of our way to make sure our navigation was spot on. It was and he was. The door gunners were always tied into our conversations.

My door gunner asked if he had permission to shoot and kill the man. At that moment, the responsibility to take that mans life was on my shoulders and my decision. I had permission to do so in these combat missions. All the door gunner needed was a “yes” from me. I said “no” and told the team we were going to fly over and see if the man had a weapon. He did not.

On our next pass, I told the door gunner to shoot along side the man and if he ran, then he was for sure the enemy. The door gunner lit up the M-60 machine gun, spitting up mud/water at 750 rounds a minute next to the man walking on the dike. He continued walking and made no attempt to run. I gave the “no kill” order.

I have thought of this moment so many times in the years after. I know the man in black pajamas knew that if he ran he was a dead man. To this day I do not know if he was the enemy. I could not kill an innocent/defenseless man, even with permission in an active war zone and as a part of mission protocol.

I was a 20 year old kid with permission to take a life. I have thanked God a million times, in the years after Vietnam, for guiding me on that day. In all of the war fighting I flew, I never had an itch to kill. And no, I knew of no one else who did either. From where does a young kid find the right thing to do in times like this?

We were returning one morning from a normal fire mission. Cleared from the mission, we turned north, on the deck, along the Central Highlands coast line. A mile inland or so the earth erupted around us. Nothing to draw on from experience nor training. We realized that we were in a B-52 strike and luckily on the edge of the drop. We turned right, directly for the coast line and the explosions waned behind us. Our tails tucked between our legs, pucker factor at max and shoulders shrugged waiting for the hit. Of course we would have turned into dust and never ever known the moment of being hit by a 500 pound bomb falling from a B-52. Lucky? Yep, lucky, shaken up and somewhat pissed off that we were not briefed on our mission being close to a scheduled B-52 strike that morning. I had a few conversations on all of this when I returned. And sure enough, looking at the map of the proposed strike, were were on the eastern edge off the targeted grid square. We received an “oops” from the morning mission briefer. 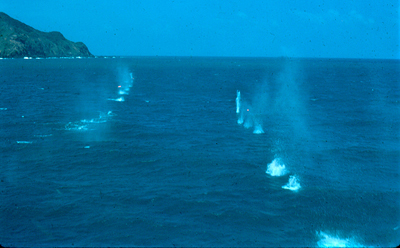 As we hit the coast line, we turned north to parallel. Flying a loose echelon formation, feet off the ocean deck. Gunners wanted to open up the 60's and I said go ahead. They did and it was a photo opportunity. Just like in the movies, two M-60 machine guns kicking up the water in front of the helicopter.

I shut them off after a few seconds and we settled down to the last part of our flight to home base. On the shoreline deck, carving the same turns, ups and downs as the coast line. We rounded a small rock peninsula (in the photo above) in a tight left hand turn. There on the rocks was a single man, black pajamas, fishing. The door gunner asked if he could shoot, was he the enemy, and I said NO. I saw this man and I saw me, the teenager, sitting on the rocky shore line at Westport Washington, fishing for Perch. Same same!!

The door gunner's question was not an on the edge of the seat request, but a request just the same. All the kids we flew with were exceptional young men. Many of our mission decisions were defined in the moment.

The B-52's flew out of Guam, using celestial navigation and obliterated designated rectangular targets. From a distance, when we were called in to over fly a recent strike for report purposes, it always looked like the B-52's had about an 85% accuracy rate from that high altitude method of bombing. Very few bombs landed outside of the designated target area. I never saw anything left to report on. Total surface of the land destroyed. We were sent out a few times, at day break, to over fly the nights B-52 air strikes. I cannot remember ever seeing any damage to the enemy.

Earlier this week I learned this.


"B-52 missions flying out of Guam and Thailand were required to file flight plans as required with the local ATC and thus to the world in the form of a NOTAM. North Vietnam was receiving these NOTAMs via the CAO and were able to extrapolate target data from the documents. This gave ample time to warn potential targeted units and locations with up to eight hours to vacate the
area and make defensive preparations."

I turned 21 flying those combat missions in Vietnam. Seventy-one now and many years to digest truths about the war, about the senselessness of any war and loss of men and women. So much is lost in the causes and agendas of world leaders. You and I can spend countless hours here on many tangents. War is not a peoples' choice but people are the ones who pay the price. It looks so much different now than it did as a 20 year-old combat pilot. Back then, it was all for the men/brothers put in harms' way. That is what I understood then and, if put in the same position today, I would again serve those men with my life. But I so understand now the futility and utter waste of what put me in that position in the first place. 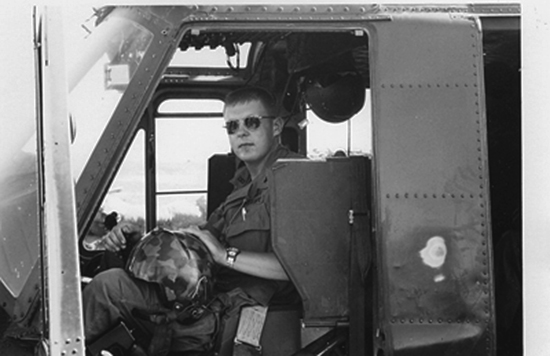 One late afternoon at McChord AFB, found my parents and I milling around the terminal. All the young men and women wore their colors. The parents paced, hugged, kissed and cried.

I was a young helicopter pilot going to Vietnam and I knew I was not going to die. My parents did not share the comfort of my convictions. My father pulled me aside, held me close and handed me a stiletto knife in a sheath. The knife was designed to kill and had been hidden all day with in my fathers jacket. Of all the lessons my father had to teach and give me, this day’s charge was allowing me the permission to take another human life. “Do what ever you have to Son, to come back to us in one piece” said dad. Mom never saw the exchange.

My dad’s eyes were red, but he was strong for his wife and son. His heart must have been tearing at the hinges but I never saw him cry. I never saw the depth of my parents pain. Many years later they told me how many in our community shunned them because their son was fighting in Vietnam. I had no idea and they carried that burden completely.

Today, I may very well be in the Basket of Deplorables.  You and I may very well re-think the foundations of our lives when we realize we are citizens marked by our government leaders and a political class.

With their fingers on the trigger of a drone strike or a battle rifle; if given a "free fire zone" protocol; what will the young kids serving America do today?
Posted by ymata at 7:04 AM