BACK TO PONDERING THE AFTER

The recent post from my Vietnam era was a heartfelt and a quick reflex when I came upon the video I had made years ago. I found it tucked into old photos on an old computer. I get big lumps in my throat sometimes and that old video did just that. I wanted to share it.

I grew up with the notion of being born too late. I wished I was timed right to fly P-51 Mustangs, P-40's, P-38's, the gull wing F4-U or the like in war.  It was not war that drew me, but the flying in the most freedom of flight.  I may not have lived to tell stories of heroes and exploits flying in that era, but the dream to fly those large horsepower piston engine driven fighters is sewn securely in my soul. How can the starting, taxiing and flying one of these old birds not light a fire inside someone? The sound of a piston engine loping, as each of the 18 cylinders catches, thumps places deep inside me. Say it with me; “R-2800, 2804 cubic inch, 18 air cooled cylinders arranged in two rows.” Makes the old “56” Chevy a little wimpy. 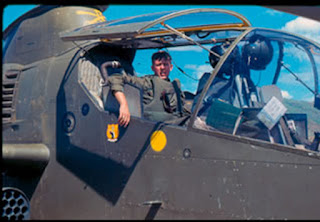 President Nixon decided that experienced Vietnam helicopter pilots needed to return to Vietnam in 1969. I had been flying border patrol in Germany and was content to finish my tour of duty there. Then the paper work arrived and I was to be sent back to Vietnam for my last year of obligation. I decided to transition into the Huey Cobra and spent that last year flying Cobra gun ships. Good flying and stories. Sitting on the tarmac at idle, canopy open with a full load of munitions. Yea! Good stuff but still not big piston engine flying.

I could always be found on a flight line where ever we were stationed. Quite often, I would see a flight of two or a single A1-E Skyraider circling to land and I would stand as close to the runway as I could when they turned final approach and landed. Little pilot(s) sitting in this massive flying engine and wings. That airplane could carry an aircraft carrier in munitions. Several times, I had the wonderful opportunity to pick up where they left off on a given mission or to bring them in after we expended our ammo. The air force quite often had layers of fighters over head as needed. But to see one of those pilots dive to a target, let go with what ever they were using and then perform an effortless, hard-climbing turn with wingtip vortices etching their place in the sky and painting aviation art masterpieces. You will soon see that I am easily distracted by anything that flies. I digress!

My "after" here in this blog refers to an inner concern of being ready for the big flood, fire, earthquake, nuclear exchange, market crash, zombie advance, empty store shelves, flag-hating, national anthem hating, hating, UN crowding our cities and streets, meltdown, some of our lives not mattering and you know. Shall I add more here? Nope. But you know I could fill this post with nothing more than these kind of examples. I sense a good portion of the populations now have been soaked in the same stew for so long that we are over-cooked and are looking to climb to the rim of the pan for fresh air and a look-see how far it is to the counter top. I am not alone in this stew and that carries no comfort.

Roma tomatoes are in their last throes of life here, returning the love. Each tomato plant was given a cracked raw egg, placed 8” down hear their roots. The bride found this information and I tried it. Nitrogen/iron? Our results have been an explosion of tomatoes. 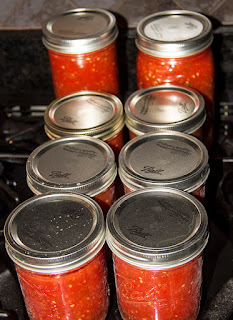 Mother nature cares not our daily routine nor interruptions. She dumps our planting and growing efforts in our lap like a micro burst. Since she is ahead of me on taking care of this bounty, I have found that the tomatoes are warm and red ripe. Bursting with color and flavor. A group in boiling water for about a minute, the skins pull off and the hard core is trimmed out with a sharpened paring knife. In a few minutes a full pot of tomato sauce begins. The bride picks green peppers, peppers, garlic, onion, basil leaves and other herbs. Crushes and chops two cups and adds to the pot. A minute or two with the handheld emulsifier and the bright red sauce appears. All homegrown. Canning today and then another batch to start. Maybe a couple dozen jars when completed. I have been talking to our plants all summer now and they have come through. How can I not follow through saving all they offered this season.The drained tomato juice from this cook is shot-glass worthy. Every flavor of the garden that completes with a little heat. And yes, I do swirl the cooled juice around in the glass, whiff the fragrance and finish with the audible "ahhhhhh." 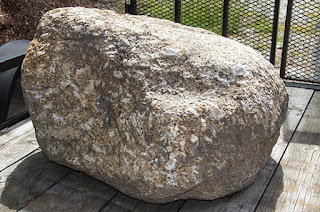 The big rock still sits in the trailer. Not like there are not enough rocks here. The builder had to blow the top of the hill off when they build our house years ago. Ledge. Lots of small rocks then and now. But we found someone giving away large rocks and the bride wanted them. I have a plan on to drag it off with the tractor, but just have not gotten to it yet.

Woodpile outback getting smaller and woodshed filling up. Still weeks behind compared to years past. Usually by now, I could sit a while and survey my completed woodpile work. Behind on so many things. And instead of outside working in the cool morning air, I sit here and write.

Plan to do better with more of The After stuff. Not OMG OMG nor ###, but just writing out loud. I should open up comments and am getting a little closer to that. Not sure what my hang up is.

For The Fun of it. 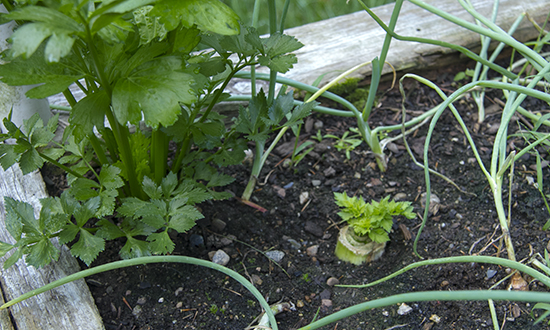 I planted the cut-off end of a celery stock in the corner of the raised garden a month or so ago (upper left of photo). Then another a week ago (middle of photo). Read they would grow again. Dirt and water!!

A gallon of water is still 50 cents this Labor Day weekend, bread $0.99. Twenty-nine ounce canned peaches are a dollar, lights turn on, water pump runs, car starts, sun rises, cooked chickens are cheaper than whole raw chickens. Milk and dairy products fill the shelves to the front of every row. Store aisles overflow and Monday mornings can find a dozen folks re-stocking local markets. Day-old breads, pies and cookies can be had for songs and gas is $2/gallon. The deli is flooded with cooked food and fixins' for any kind of sandwich/salad with any kind of condiment you like. We still travel freely to and from, a happy meal just minutes away, moms make apple pies, the national anthem puts tears in my eyes and turns others into haters. We have off buttons, mother nature reclaims what we neglect and there is order in the world.  For now.