Late afternoon sunset this past week. Temperatures in the mid 70's in east Texas. 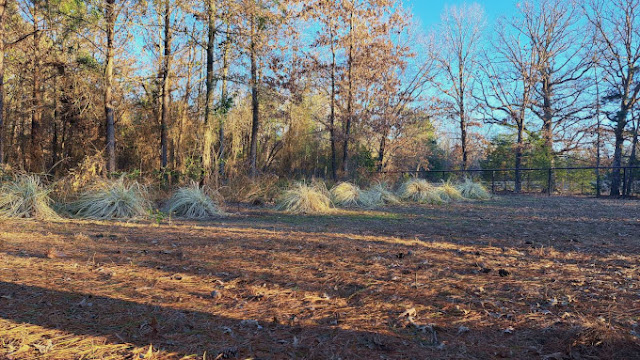 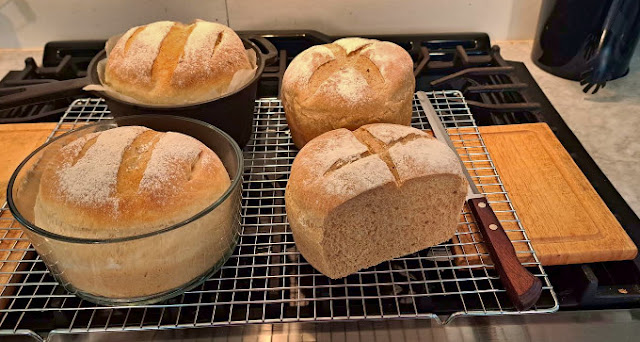 Decided to get back to some bread making. Basic 4 cups of flour recipe. I add one egg and a little less than two cups of warm water. Electric mixer with bread dough hook. Mix for 5 minutes adding a little water or flour for the best. moist. tacky dough. Both risings in a warm place. Baked 20 minutes at 425F degrees.
I have posted often here of bread making. Warm sliced bread with butter never fails to check all the boxes of the wonderful smell of fresh bread baking in the kitchen and simple satisfying moments of a fresh slice of bread out of the oven. Always an excellent filler to any meal. Best ever morning toast too.
-------------
JANUARY ONIONS  BATCH #1 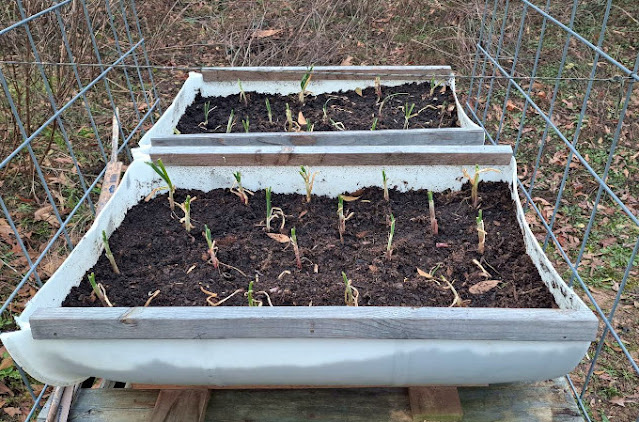 Onions, radishes and potatoes can go in the ground now. I called the feed store in town and "yes". onion sets were in as were seed potatoes. An hour. later I was home with both.
Warm weather and 10-day forecasts are favorable for planting. But to date. conversations about starting gardens, and most folks are doing the same, always end with "there is still February." February is winter in east Texas. February is a crapshoot but what the hell in life isn't?
The raised gardens above each received a full shovel of compost, some food, bone meal and some fresh potting mix. All raked into the left over dirt from last year. I have forgotten the pleasure I get from seeing rich soil and the feel of it in my hands.
I always finish off each raised garden running my hands through the soil like a rake. Picking up a hand full and feeling the goodness of the ground. Reaching deeper to feel the same.
That is as good as my explanation will ever get. This comes from the gardens I helped put in on the ranch and from the years helping my mother put in her gardens. Grandparents, parents who taught me, held the soil of their gardens in their hands and talked about the feel of good soil.
Five pounds of seed potatoes have been cut in half or quartered making sure each piece has two/three good eyes on it. They rest now in a paper sack in a dark corner of the shop. Once the cut surfaces "harden/scab over," they can be planted.
---------------
VAXX
More "SUDDENLY" in the news this past week.
I read where the Pentagon has suspended the mandate for mandatory vaxxing for the military.
BUT, there is still a push for more vaxxing. From Western Shooters Association comes a good read on talking points that may be used by main stream media favoring continued C19 vaccinations.
This is one of the biggest elephants in the room, I believe, as we start this year. Watching how all of this plays out ought to be interesting and worth our time. BUT "Facts are stubborn things." John Adams.
--------------
SIGNS OF THE TIMES from Vov Popoli
------------
D of NA
Nations coming together.
-----------
BANNING GAS STOVES and
more BANNING
---------------
The war in Ukraine and nuclear war possibilities always playing in the background this past week, too. Add finding classified documents. What ever!
---------------
I will leave you with this. 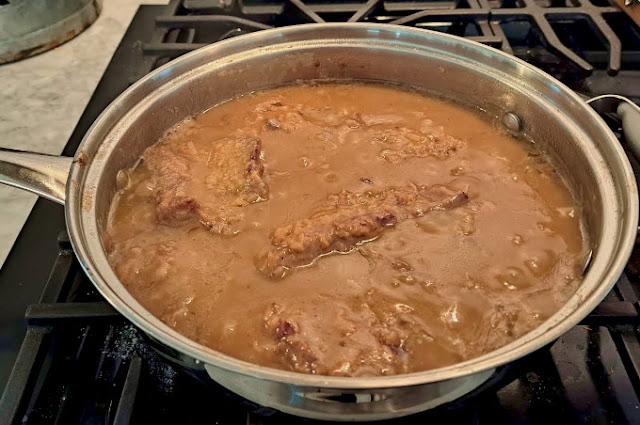 I am late to learn this also. Tastes just like mom use to make and oh so simple and quick. Lid removed for above photo .
Cooking/simmering meat in gravy. My mother could and did quite often. Inexpensive meat, browned and simmered an hour in a gravy mixture. usually in an electric skillet with lid on.
The meat above was on sale; cubed steak, good price. Cubed steak needs to be grilled on high heat quickly, sliced and eaten. OR, cooked for hours to get it tender.
Gravy mixture, simple as falling off a log. A can of mushroom soup, a packet of dry onion soup mix, one cup of beef broth, one cup of water. Adding more water as it simmers is normal.
Meat was floured and browned. The soup, onion mix, beef broth was added to the frying pan after most of the grease was drained off. Low low simmer and stirred for 5 minutes, meat laid back in, lid put on frying pan and simmered on the stove for an hour. Checking twice.
Fifteen minutes prepping meat and an hour on low low simmer.
From here it is cook's choice how to serve. Rice, noodles, bread, covered with gravy. The meat did cut with a fork and the flavor was home cooking comfort. Make sure you make enough gravy. The secret ingredient in my book.
This meat preparation and cooking will work with chicken and pork using chicken broth.  A myriad of examples on the net.
------------
FYI. In the last post I mentioned we were going to add a few boxes of peanut butter cups to replace what we have eaten over the past year. Come to find out the cost has increased 400%. On to plan B!!
Appreciate the visit this week.
Posted by ymata at 6:15 AM