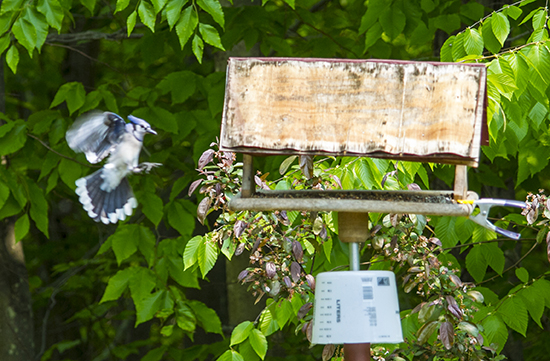 Playing with a new remote attachment for my camera last week. This was one of the best shots of birds hitting the tired bird feeder. 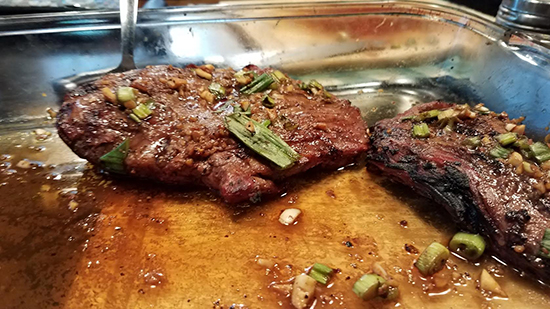 I mis-spoke last week when home butchering a few slaps of beef and making steak tips. Flank steak is its own cut of beef. I was trying to liken the thin cuts I got from that butchering to be similar to flank steak. I did marinate and BBQ as per the recipe. They turned out delicious and the photo above does that recipe justice for thin slabs of beef off the BBQ. Enough! 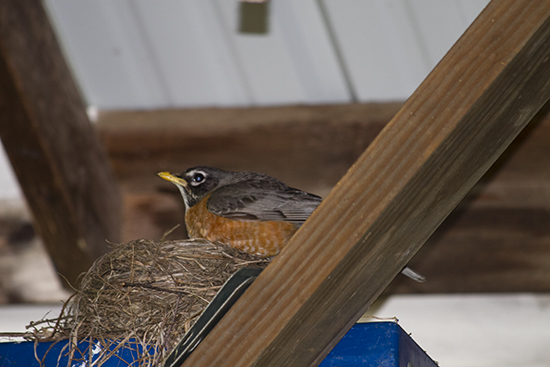 After putting the tractor away last evening, I pulled the keys and sat there momentarily inside the wood shed. While looking around I spotted this mother bird, sunk into a nest she has build on top of a ladder resting against one of the wood shed posts. Needless to say the ladder will not be moved until she and her family have moved on.

Mamma bird barely fit inside the nest, resting on her eggs. She was motionless and it took some time for me to recognize what I was seeing. Out of place inside the shed and a new nesting place for locals.

Most of the simple things in life are truly amazing. The poop down the sides of my truck each morning, not so much. A small price to pay.

As new technologies emerge, seemingly daily now, is there anyone in the room who does not immediately think of how to weaponize the new advancement? Of course not.

Let your mind run awhile on the bat s*** crazies getting their hands on a few thousand of these little fellows.

After eliminating mice, relocating squirrels and chipmunks before last winter set in, I cannot fathom bugs like this invading.

But, I still want a DARPA Dog!

A June up-date from Raconteur Report. The author terms the potential of this becoming a "slate wiper." It is not like his take on this of how ill prepared we are, is of and in itself a mind opening read, the term "slate wiper" cements an idea of there will not be coming back to anything we know now or have lived our entire lives. No coming back.

A society hell bent on concerns of the Muller Report, will in an instant realize that "we are not in Kansas anymore" should Ebola seed the smallest number of people. Think just one person crossing from Mexico into the country. Just one, then how many they have been in contact with.Thinking along this line is most reasonable given freedom of current immigration movements and large numbers of people.

Preparing now is by far the easiest of all the worries. Food, water, take care of waste material, communications and the prospect of staying home bound for a long, long period of time. When do we make the hard decision on staying in our homes for the next 6-12 months without leaving AND WITHOUT LETTING ANYONE COME IN TO JOIN OUR/YOUR long term survival? One person will kill the whole survival world you have set up. Just one new person coming in during the after. No coming back!!

So I do worry, but not crazy worry. Prepare somewhat and keep an ear to wall of what is and is not being said regarding this. We all will be on our own and best to lay good ground work now, what ever that may look like.

I read this article and was taken aback by the folks who try to explain away what other people have eye-witnessed. I guess because the eye-witness is just not smart enough to know they saw what they saw. It is the these experts  that are completely out to lunch!!

Quite a few years ago, three aviation friends and pilots and I hopped in a Cessna 210 and left the west coast of Washington state to fly a couple hours inland to Eastern Washington. We went to look at purchasing a Cessna 177 RG for our flight club.

I opted for a back seat ride to Eastern Washington so that I had a front flying seat on the return flight home.

We took off VFR with a dead-reckoning marker of Mt. Rainier off our right wing. Had Seattle flight following monitoring our flight on radar. Weather was perfect and the flight most scenic.

We flew the 177 RG and found it to be a sound air craft, but later opted out of the purchase as it was too much aircraft for most of the club flyers.

The return flight that night gave wonderful VFR weather, Seattle Center flight following and Mt. Rainier off our left wing. With the lights of Tacoma and Seattle in the foreground, we all saw a bright bright light moving from north to south over western Washington. As we briefly visited about what it could be,  Air Traffic Control communications lit up with airline captains talking of the space shuttle re-entering the earths atmosphere. It was then visible north over Seattle and heading for a landing in California.  Much chatter from other pilots watching the re-entry as it unfolded before our eyes.

The re-entry was fast and lasted only a few minutes. But the glow from that event was what we saw and no one could have talked any of us in our plane out of what we had seen. Had the radios been silent, we would have wondered all the way home what it was we saw. Too slow to be a meteor, but fast enough to be a controlled event. No expert could have ever convinced us it was some kind of aberration.

Experts have long been vocal about UFO's and I believe that they think it is our own best interest and that we "cannot handle the truth". Nice of them to worry so much about the riffraff.

Hundreds of thousands of folks have seen objects acting abnormal in the sky's above for decades; longer. To think we are alone in this universe is absurd. My opinion. Quite often the space station shuts off live feed whey these kind of objects come into view.

I think we are closer than ever to an official announcement that we are not alone. Proof.

Ought to be a grand comedy show from the media and appropriate agencies.