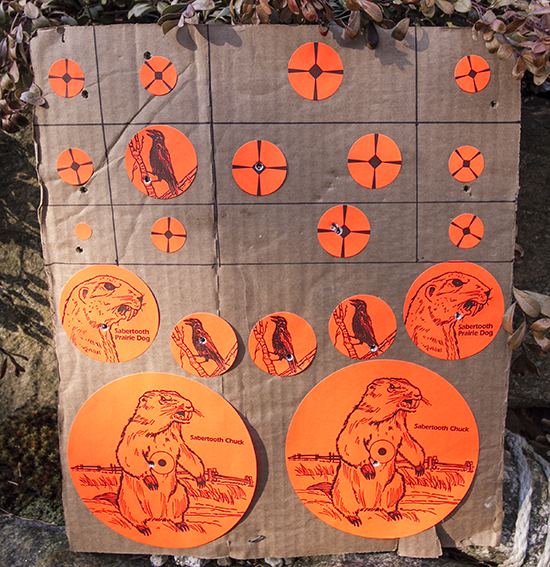 Winter weather has kept me from the range for months now. Saturday last was an official first outing for plinking and final zeroing in the .22 rifle. The warm sunny day was an anomaly and I was out to take advantage of that too.

After a little time on a first target for centering and a one click adjustment for windage and elevation, I decided I was ready for one-shot tests on critters at 50 yards.

As good as the rifle finally zeroed in and as good of glass as I have mounted to the rifle, I cannot hold a perfect stillness on any center shot. Close, but the rifle will do perfectly. On a bi-pod, good breathing, good trigger squeeze, good on center cross hairs, the slightest of movements I could not control, still resulted in some good shots. My goal of every-round-a-dependable-center-shot waits for another day.

I will repeat this round of practice soon, but this time, at 100 yards.

I was also able to join in helping and doing a little teaching with a young group class of two dozen (20 somethings) later that day. They had requested a class from The Women's Defense League of New Hampshire. The gals teaching monthly gun classes are all NRA certified and on top of the training curve.  Fun folks to be around.

The young college students took to the instruction like ducks to water. Many had never shot a pistol before, a few others had some experience. One young gal I visited with said she had never shot before, but that her grandfather and father had rifles and were hunters. She explained that she wanted to learn safety of guns and gun use. She was also ready for the experience. Simply put, "I want to learn how to shoot a gun."

FROM THE BURNING PLATFORM. A good read

“If you don’t want a man unhappy politically, don’t give him two sides to a question to worry him; give him one. Better yet, give him none. Let him forget there is such a thing as war. If the government is inefficient, top-heavy, and tax-mad, better it be all those than that people worry over it. Peace, Montag. Give the people contests they win by remembering the words to more popular songs or the names of state capitals or how much corn Iowa grew last year. Cram them full of noncombustible data, chock them so damned full of ‘facts’ they feel stuffed, but absolutely ‘brilliant’ with information. Then they’ll feel they’re thinking, they’ll get a sense of motion without moving. And they’ll be happy, because facts of that sort don’t change.” ― Ray Bradbury, Fahrenheit 451

This book was published in 1953

Thanks for the visit