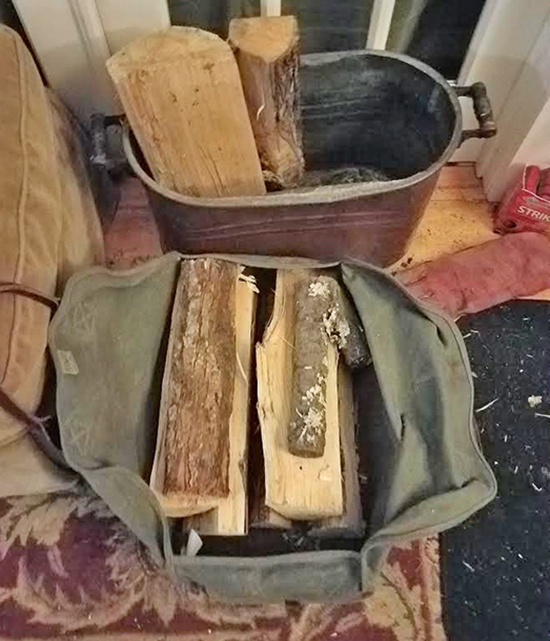 A late Christmas present from close friends. A simple gift yet completely practical and used daily since I opened the present. Easy to carry, no messy wood carrying shirts, no debris falling on the floor coming into the house and no more worry of carrying a corner of an arm load of wood across the kitchen hall wall.

I joked in my last post about the Lord of Weather. How she had failed to fulfill the snowstorm forecast for last weekend. Early this past week, I realized she had a different plan and potentially more dangerous. It was the -4F to +4F degrees, daily highs and lows with wind speeds from 10-30 mph throughout the night and Monday last. This is weather that will kill in a very short period of time if not fully prepared to travel or be out in it.

A good friend traveled to the middle of New York State for a wedding LAST weekend. He and his wife opted to head home that Sunday night, a 6 hour drive.

He found that he could only pump a few gallons of gas as the gas station pumps froze as he pumped. Said it was that way all the way home. I, for one, would not have seen that coming and his story is a good reminder to always keep cars topped off when traveling in this kind of weather; better yet, when traveling! A good habit to develop.

To think that all will fine and normal for needs on the road trip are not, in this case, due to extreme weather. Traveling without bug-out bags, food, water, extra clothing, blankets and other basics can also turn life threatening in an instant.

I would hope that if my wife and I were traveling in this kind of weather, especially with children, that the back of our car would look like we were moving.

A good friend and neighbor by rural standards. A new home for him and her and their first gardening attempt this past season. If you are planning a garden and new to it all, spend some time with his photos, garden plans and results. And check into his blog from time to time. Fun stuff.

We received a party invite earlier this past week to attend an annual game dinner from neighbors who live a few miles east of us. All food wild, locally hunted and guests bring their special dishes. We said yes and it was an opportunity to gather with folks we had not met.

We took homemade bread and a dessert tray. Once the bread was discovered amid the dishes of everything, it went fast. Something about homemade bread that always works.

The rabbit chili was wonderful. I would not have known it was rabbit had someone not told me. I would have thought chicken chili by the looks and flavor. The Venison Parmesan was the show-stopper for me and many of the folks there. Tender enough to cut with a plastic fork.

The wild turkey had been marinated the day previously and then smoked for three hours. The host told us to be careful as there still may be a "bb" for two that he did not get out of the breast meat. So, an easy slow chew for that sliced meat. A wonderful flavor giving me a whole new appreciation for the wild turkeys that roam our woods.

A plate of sliced Venison, cooked medium rare, with the slightest hint of wild. That was followed by bear cooked in similar fashion. Melt in your mouth and no game flavor. The only out of the loop meat I saw hit the table were hot dogs and one guest asked if they were squirrel hot dogs. I do not know if he was kidding.

I did not try the deer sausage as it was wrapped around a jalapeno and cheese. After watching the face of the gal ahead of me go red, I decided that the heat was beyond something I would enjoy.

Most of the attendees were thirty-somethings. Many married with children. For every adult circling the food table and kitchen counter, there was at least one child. Children were running everywhere and coming out of nooks and crannies. Good-looking kids and each being a kid. Doing what kids do. Play, make noise and stir up a party gathering. I, for one, was in heaven watching folks I had not met before gather for special eats and conversations. The heart of America before my eyes. Took me back to the days I was very young running at my grandparents ranch while the adults visited. Always, always tables and counter tops with homemade local foods and desserts.

I told our hosts that this was the very best party I have ever attended since we moved to New Hampshire 18 years ago. And my comment in no way negates all of the other gatherings and friends we socialize with. But the life and living in that small home this past weekend was life and living in glorious color. No agendas, no politics, no pretenses, no one sitting with a cell phone in his/her face.

These folks are the backbone of our country. They are doers, builders, hunters, fixers with everyday skill sets from making a living close to the land. Throw in a masters degree in nursing here and special training there. Mothers and fathers with several children coming and going from their over watch. Most all of these guys and gals can dress a deer from start to finish in the coarse of a normal day. Pluck a freshly hunted turkey or prepare a rabbit for dinner as easily as a townie can order a big mac with fries.

I sat in my wooden chair, arm resting on a steel safety gate to the downstairs, and watched the ebb and flow of folks having fun. I visited with folks sitting next to me and passer-bys. It was any weekend at my grandparents farm in 1955 all over for me.

The heartland of our America is alive and well.

January is gone for all practical purposes. The winter worm is turning and it does not get dark now till 5:15 PM. The days are noticeably 45 minutes longer. February and March can be brats in their own way. But they are the gateway to a new season and will come, go and quickly be forgotten as was January.

Heads up and look for the good. It is there. You may have to turn off the media, and put down the phone. Give it a little time.

Have a wonderful week and thanks for stopping by.