IN THE SMALLEST OF WORLDS

Did you get the memo last weekend? 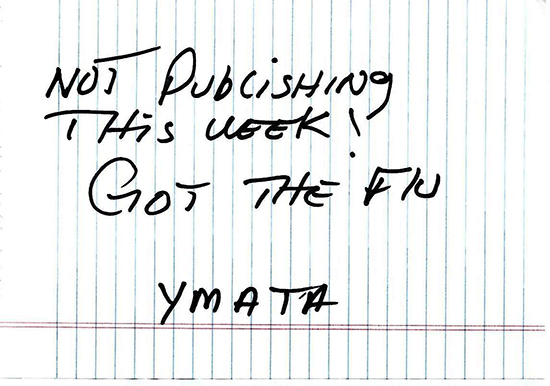 You did not because I called in sick and failed to send that memo.

I had vowed not to get sick this year and knew I wouldn't because I was staying away from crowds, washing my hands often and thus, exempt.

Apparently, all it takes is one small crowd or two small children coughing in the nearby distance. Or was it one of the places I touched while out and about? There are always people when I am out and about.

The flu came on last weekend and was enough to decommission me from all chores.

To the doctor Monday and found that I was still inside the first 48-hour window of the onset of the flu.  Meds could still be prescribed to minimize the severity and length of the illness.

My wife was by also coming down with symptoms and also prescribed the same round of meds.

Long story short, we were only grazed by the flu bullet this season.  I have been constantly tired and sleeping a lot; even to the point of feeling rested. No staying power, though, past a couple of hours.  My wife has done much better. 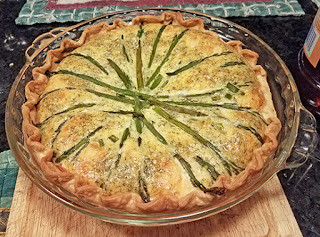 With a lot of time on our hands, my wife has turned to some baking.

The quiche to the right was her first. Wonderfully done and the taste of smoked salmon a treat.

Quiche #2 was a broccoli and cheese. Simple, quick and lasted one day. No photos.

Quiche #3 was sausage, green pepper, onion and cheese. My favorite! Everything breakfast served in a pie crust. 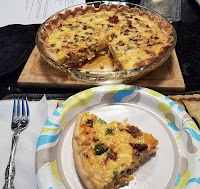 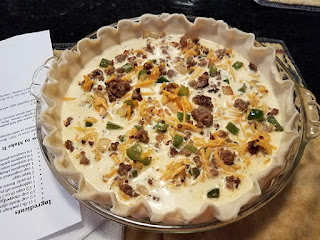 IT WILL KILL US   TED talk by Jay Tuck

YMATA blog started when "the after" was tomorrow and beyond. Ideas of being prepared and being self-sufficient were to be at the center of many discussions.

Today, "the after" has arrived. Most are not ready and it may be too late. Not to be another one spreading doom and gloom this week, but this for the purpose of being informed. We ought to pay attention.

This TED talk is worth sitting back and listening.

Artificial Intelligence is advancing at a rate beyond imagination.

In the smallest of worlds, our past two weeks have been mostly housebound. Healing from a glancing blow of this season's flu, finding some entertainment in meal preparations and a getting needed rest.

With a smile on my face this morning, my imagination envisions the Lords of The World, sitting around their table. The Lord of The Flu says to The Lord of The Weather (while pointing to my wife and me) "they both escaped the ten down days of miserable sickness I set upon them. Can you help me?"

The Lord of The Weather says "Yes." With a wave of her hand, a twist of the wrist, she adds, "let the many also partake."

From their round table this Sunday morning The Lord of Weather has not lived up to her forecasted 27" snow fall. Most folks received 8"-10" of powdered sugar snow. User-friendly and easy to move/re-move. If I were ordering snow type and amounts last week, this is what I would have ordered.

This also perfect for those who are out playing in snow, other than making snowmen.

Very low temperatures tonight and tomorrow will have this storm's leftovers frozen in place tomorrow.

Have a wonderful week. Thanks for the visit.
Posted by ymata at 12:44 PM