My wife recently mentioned that we are the Country Mice. I have long forgotten the fable, but took to her comment on the differences of living in the country and living in a big city. Neither a good nor a bad reference, rather more of a reminder to us that the coming of winter in the northeast brings with it some mandatory activities to get ready. Sooner rather than later when the ground is covered in snow.

With newly found time on our hands, as we no long have pets to care for other than the barn cat, we hopped a couple 737's to Texas to visit family. We left our little town of three thousand to visit a city of 7.4 million.

These kinds of trips are looked forward to but I find I move slower and the simplicity of getting through airport security is gone. Much has changed.

The TSA agent told me to put my hands up over my head for the body scan machine but my shoulders only allowed me to get to the "hands up, don't shoot" position. All that had to get done quickly as the body scan expects a 3 second window. Of course, my pockets were not empty nor was my belt off. But the agent was nice and realized he had someone without a clue to deal with. I gave out many thank yous. On our trip home this past weekend, I even had other passengers bringing me stuff I had forgotten on the moving scanning belt. My poor wife!!

Brother-in-law and his wife treated us to the best fish n chips, BBQ, country fried steak and fried chicken Texas had to offer. The pastry and coffee shops were icing on the cake. These were not fancy or lavish eateries. These were the out of the way places locals know about and travel the Belt Line to enjoy.

They also took us on two sightseeing day trips to eastern Texas for rolling hills and unique small Texas towns. They know the back roads and by-ways of Texas like we know the few miles of back country roads here.

Then they arranged a guided tour through the South West Airlines Training and Operations Building.

The walls and hallways are adorned with miles of aviation wall art. Any pilot, or just plain visitor, will be in awe of the history of that company and aviation that covers the cafeteria, hallway and classroom walls. I could have spent hours just gawking at the aviation art. 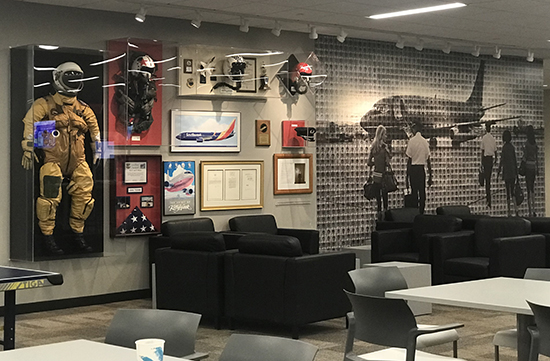 The large photo above of a crew walking out to the airplane is made up from SW pilot photos.

Large wall photographs, like the one above, are common through out the facility.

The flight simulators are state of the art and look like AI walking robots any sci-fi fan would drool over. Watching them "dance" in simulated flight from the observation deck makes the very best AI movie experience pale in comparison.

Another of my wife's other brothers invited us to visit with them at the Dallas-based campus of his community church.

I stood in awe walking in the massive open space of the campus. My wife, her brother and his wife walked aways ahead of me as we entered. Within a few feet of entering the building, I was lost in the grandeur but felt at ease in the palpable warmth of people gathering in nooks and crannies of the multi-level facility. I could feel the human touch and I was most comfortable alone as the family moved ahead of me. I felt a presence of peace and became easily lost in that.

We collected a cup of coffee and sat down to visit. This was the first time I had met this side of the family and we were immediately deep in conversation and smiles.

Quite often, numbers are set into writing to move to a point of an article.  Numbers might be in order to help further explain the grandeur of this facility.

The population of the small town community we live in would fit inside the chapel with room to spare and this past Easter, the Dallas campus services were attended by as many folks as live in our capital city.

We have been back home a few days now and getting back to normal routines of eating, sleeping and winter preparing. As much fun it is to get up and go on a vacation, I always find that coming home is equally as rewarding.

I will end this weeks blog with a photo of Jesse .


Although a hard fan of Golden Retrievers, my brother-in-law's lab Jesse is one of the most beautiful dogs I have ever gotten to know. She is spot on and displays much of what she has been taught daily. She shines brightest though when taken outside to run, play and fetch. Art in motion. 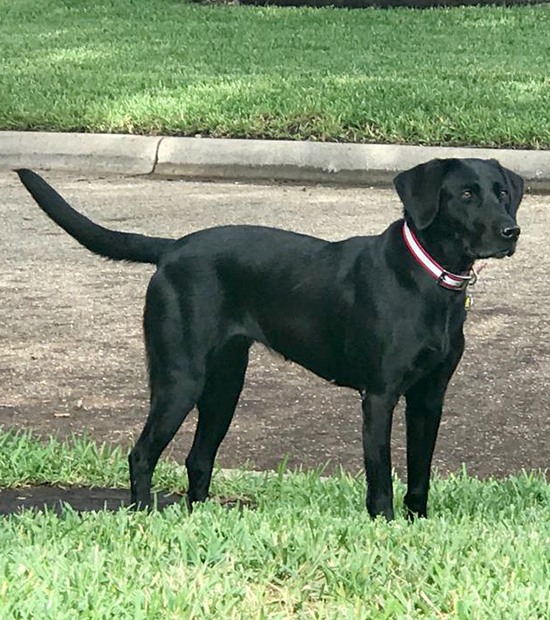 Jesse is well-trained to fetch birds from the hunt. Brother-in-law says she is a one of a kind and can fetch with the best of them. Only problem though is that when other hunters make a shot and a bird falls, Jesse is gone like a rocket. Back with the bird in a few minutes, tail wagging as the accomplishment she is so trained for. Brother in law says she needs to be out in the hunt more often and needs a little TLC to gather the correct bird. As for me, I would have to give her a pat and an "atta girl" while laughing inside.

What really got to me about this dog was the way she would put her paw on my lap and look me straight in the eye. I could see straight through to her heart!

Surprisingly in the ten days we were gone, we neither met nor encountered one crazy person. Not one. Every person we encountered was nice, polite, engaging and helpful.

Television has been off since we have been home; the Dallas trip and distant family still plays.