VISITS FROM AN UNKNOWN REGION - BISCUITS

"The Unknown Regions, also referred to as Unknown Space and the Unknown Territories, was a region of the galaxy located in the galactic west beyond the Outer Rim. Largely unexplored throughout galactic history, it remained a mystery to space travelers and served as a source of tales and wonders."

I check my stats on my blog site once or twice a week. I found that I get one visit a week, or so, from an unknown region. The internet does not know who or where that visit came from. Yes, it can get messy with drivers and stuff that I have no understanding of, but I fancy a visit now and then from an unknown region. The wife thinks it is on Mars and I tend to think dark side of the moon. ".....a place of tales and wonders." I doubt I will ever know. A special thank you, though, to the person(s) from the unknown region for visiting this blog.

THE BEST BISCUITS I HAVE EVER MADE. 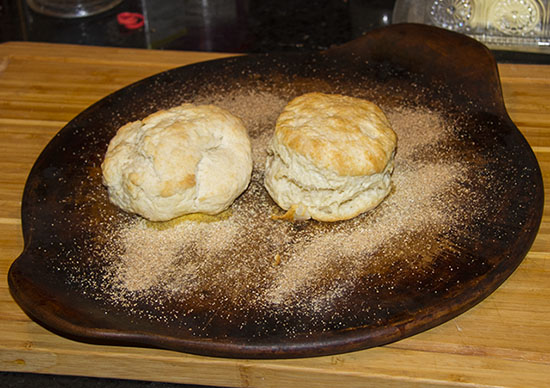 Take the time to watch the video all the way through and then give it a try. No need to ever buy canned biscuits again.

I have never ever had biscuits come out of the oven looking like the the photo above and smelling like biscuits should smell. I believe the secret is gentle and not too much handling of the dough. I have heard others say the same thing. Also the layering paid off just like in the video. I cut one biscuit using a drinking glass. I hand formed the other one to just about the same size.

My wife said her grandmother used the little bit of leftover dough by patting it thin, adding butter and a sprinkle of cinnamon, sugar and then rolling the dough into a tube. Baked along with the biscuits. Out of the oven the rolled dough treat was cut into snack size bites for the children. A mandate for a little leftover dough me thinks.

I used my mother's old wire pastry cutter for cutting butter into flour. Worked wonderfully. I did not chill the flour. I also have heard that working the dough too much warms the butter which is not helpful for making good biscuits.

I heated a pizza stone to temperature and sprinkled a little corn meal. Then placed the two biscuits to cook. I cooked at 450 for 16 minutes. I did not open and close the oven to check on them.

Stay with the basic video and ingredients and you can add your grandmother's biscuits to your baking repertoire. If your children or grandchildren do not like these biscuits covered in buttery/jams love, then I no further advice.

As I take a moment and think back to the farm days spent with my grandparents, I do not think grandma had time for complicated meals with all sorts of ingredients. Anything cooked was just the basics, but the basics were home grown from the chickens, gardens, cattle and fruits. Taking care of animals and producing lands, was a full time job. Grandma was also out in the fields helping when harvest time or planting time came on. To go into the kitchen to cook for the crew and family was just another chore.

Biscuits like this were quick and easy. The non-working of the dough might just have come about from lack of time and desire to work it. Mix, fold and into the oven. Simplicity and the old ways still work wonderfully.

If I owned stock in Nike, I would have sold it all this past Tuesday at the beginning of the business day. I would have called the guy and said "sell"!

Colin Kaepernick is now the face of the company. Instead of a once half-talented quarterback advancing his career as such, the poor kid has taken roads all ending at cliff's edge.


In your face genocide against a race that owns and farms the lands there because their skin is white and they own farm land. It makes them much easier kill and erase if they cannot fight back. This exactly why only an armed society has a chance against this kind of government corruption. We ought to take them at their word. The gloves are off and they are now calling it what it is.

I also ran across an article earlier this week of another politician here in good old USA preaching Civilian Disarmament. Of course, I cannot find it now.

Elections, open violence and disruptions now touted by our government leaders without consequences. Call out the crazies and they will come. I fear increased harm coming to every day citizens and children to keep this issue/agenda front and center.

Keep your eyes open for more headlines calling for civilian disarmament in America. It is the end game.

NOT JUST A PILE OF WOOD 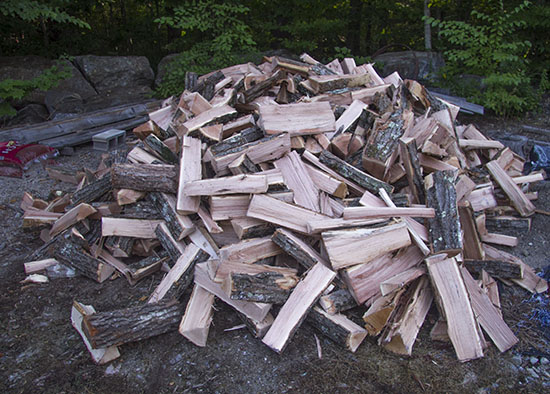 This is fresh cut to 18" and split this morning. All red oak, as ordered and at no extra cost. Heavy, wet and brings with it an unique odor that once smelled, is forever remembered. A baker's cord if there were such a thing. Our wood guy always tosses in a little extra to insure a full cord ordered is a full cord delivered. One more cord will be set in first of October.

In a perfect world we will go into winter 2019 with two cords of seasoned wood to start off wood heating. Should this winter turn ugly, this fire wood will be available to burn in April and May.

I had to laugh when I read this article. Expert said the cracking windows not related to the other problems of the tower. Reminds me of the experts telling folks that the water in Flint Michigan was fine to drink.

I would venture a guess that in a few short years, this technology will be readily available to the public.  I wonder what it would be like stepping into such a suit for assistance in normal day movements. Ahhhhhhh, to be 60 again!!

Official first acorn fell this morning on the storage shed tin roof. Another sign. Temperatures cooling. Shorts and summer clothes set aside now. Longer socks, full-length pants and waffle shirts. Will put off adding heat to the home as long as we can.


A day late getting this weeks post up and offer no excuses.

Enjoy the last of the warm days and thanks for the visit this week.
Posted by ymata at 3:37 PM