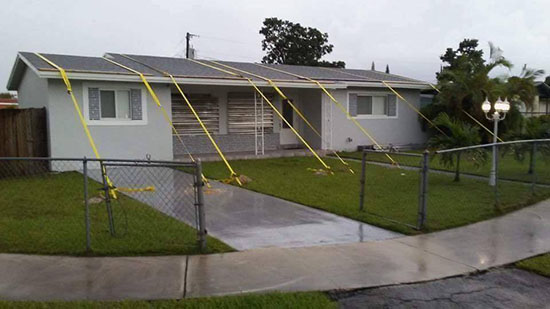 
Mid-week, September 12, 2018 and, like many folks across the nation, we are
watching Hurricane Florence approaching the Carolina coast line. Weather forecasters are working every corner of their bucket of superlatives in describing the severity of this storm. And, of course, in keeping with public dependability of truth in news forecasting, "Florence contains sharks" seems a little over-reaching. Yeah, it is a fake headline. Proof that in any serious catastrophe, we have to take all media reporting at face value.

When my wife first showed me the photo above from Facebook, I laughed. Then after a few moments thought this fellow is a few steps ahead of other folks. If those lawn anchors are set well, his roof strapping may very well be key to saving his home. I hope to see if this works after the storm passes.

I told my wife that if we were in that situation, leaving that neighborhood in evacuation, I would have looked at that home in passing and commented, "why did we not think of that.?" All boarded up and strapped down to include 2 x 4's for extending structure support along the roof edges. Old fashion ingenuity and imagination at work.

In The After of Hurricane Florence

And there will be an after for months to come. If there is any good news in storms like this, is that there was plenty of warning for folks to make decisions. Most will have packed up and left. Some will ride it out and as of posting time, we will know more of some damage done.

Folks had a few days to gather up belongings and board up their homes as best they could.  Countless lives interrupted long-term.

As an armchair observer, I would like to think that my wife and I would have a long-range evacuation plan if we lived in hurricane paths. That seems reasonable, knowing that we would have plenty of notice to activate such a plan. She would have set of responsibilities, I would have mine.

Hopefully, we would have practiced the basics of that plan a time or two. Even if it was an hour of mimicking the gathering of essentials, gasoline, stores and the such. I believe we would already have had the discussion of what we would leave behind. In a perfect world, we would have traveled the route of our escape plan.

None of this has to be extravagant. It does, though, have to be grounded in good planning along with plans b,c and d.

I know this sounds good from the arm chair, but emergencies with warning times are much better executed than those of last minute or with little to no warning time.

AND THE EMMY FOR ..."best performance by a weatherperson reporting in the middle of a hurricane." goes to...

End of the week now. Hurricane Florence making landfall and the weather/news people are again trying to out do each other. On Fox news yesterday, one of the reporters was asking locals if they were staying or leaving and they played a quickie quote from an old lady, who said in part  "....besides, the news reports tend to over react in their reporting..." Not an exact quote, but the idea is there.

The Fox news reporter took that to heart and as a personal attack about how serious the reporter(s) are and that they are just doing their job. He did not like that old lady's suggestion that there is a proven tendency for the media to hype up pending catastrophe reporting.

I had to laugh and that old gal got in a good one on them. I doubt they played her clip again.

It is Friday morning now and the weather folks are standing in the strongest portions of the wind and rain, hanging on for dear life to enhance their on-the-spot reports. It is sad and they have no idea how ridiculous they look and sound. The reporters are layered in boots, rain gear and head gear. Should they ever be blown over into a couple feet of water, their chances of drowning are much improved.

And why should the old lady leave? After all, the news stations seek out the most dangerous part of the storm and time to be in it outside to do their reports. They purposely go into the heart of the storm while telling everyone else to get out. Screw!!

And then this weekend The Weather Channel wins the Emmy! Proof that all media reporting is infected. Hard to hide who they really are. Incompetence in even faking it. Crap and double screw!! In keeping with all the lies, The Weather Channel doubles down in support of the boob reporting. Something to do with slippery grass vs. walking on pavement.

Breaking news late Thursday afternoon, had Lawrence, Andover and North Andover, MA being fully evacuated due to gas explosions and fires. If ever there was a most difficult moment for the folks of these three towns, it was yesterday, late afternoon, when they were given an immediate and total evacuation notice by officials. Seventy home gas explosions and associated fires erupted, apparently at random locations. Houses were leveled, one killed and more house fires than fire departments could handle. Add to this the potential for more explosions.

Folks were to immediately evacuate and they could not go back inside their home for any reason.

As Thursday night settled in, all was a mess for those three communities. All they had were the clothes on their backs and if they could leave in their vehicle, the contents of their car. For those who could not leave, local emergency shelters were being arranged. Of all the places I never ever want to experience or be forced into, is an emergency shelter.

This was the other end of the pending disaster curve of a hurricane arriving where folks had a week to ten days to make plans for staying or leaving. The people living in these communities were given one option, "evacuate and leave immediately!!"

Good examples this week of major life changes for many people due to out-of-their-control disasters. Uprooted for a long period of time facing these folks. It is not a long stretch of imagination for any of us to find ourselves in a situation like these where we have no say with our own property, personal belongings and daily life routines.

Bug out bags, although inadequate in the three town above evacuation notice, is much better than nothing. A good example of why to keep gas tanks always a half-a-tank to full. Always. Well thought out bug out bags kept in vehicles can be life savers and give three days of basics while a disaster plays out.

Water, snacks, meds, clothing for the season for every member of the family. Charging cables for comms and the list here can go on and on. How many folks have an extra pair of good shoes and socks tucked aside in their cars?

As much as family members might reject practice emergency departures for an hour or two, much will be learned on what to take, what is important and how families interact. Odds are most of us will never have the need for all of this, but like the three towns mentioned above, some time preparing to take care of ourselves and our families in an emergency can be a game changer. 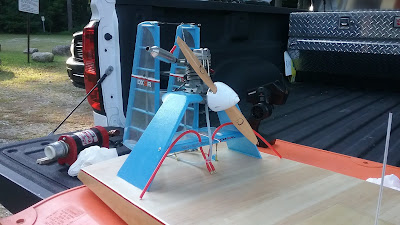 Both of our rc air boats now completed and run. A few more runs in larger lakes are in order. To make changes or not to and just run them as they are and have fun. The boat above has barely been above a high idle in testing. High speed runs are in order for complete testing of design. The engine power on this little boat is scary!!

These have been fun to build and have given son and I time together to visit modeling that we use to do many years ago. Priceless.

Fresh apples from local orchards are coming on. Like so many home grown items I talk about here, fresh apples too are a treat. My wife made fresh cut Cortland Apples heated with butter, sugar and cinnamon for breakfast this morning. Says her mother use to make this for her and her siblings when they were young. Simple stuff.

Have a great week and as always stay away from crowds; watch your six. As always, I appreciate your visit.