It all started here two years ago.


My main push to start a blog was to talk some of self-sufficiency, some prepping and commenting on worldly stuff for the purpose of clearing the air here in my office. I have also enjoyed drilling back years into my early days with grandparents and parents. Oh, how I wish I would have spent more time talking with all of them on so many things.

If you are a youngster and have oldsters in your mist, take the time to visit with them about the days of old. See how you fit in and about times years ago. Very good for the head and heart.

Humor and tongue in cheek have been thrown in from time to time. along with very iffy pencil art work. Eighty-six hundred plus visits as of this last week, which is nothing when compared to others who post. Hits from all over the globe on a weekly basis. I could not be happier in my little corner of the world.

The postings have indeed helped me clean out the weekly cobwebs. I find that in all of the writing, I throw away much more than I post. I tend to get too wordy and over write. Like many things in life, more is not better, it is just more.

At times I have a tendency to veer off like a rock bounced off a bolder. What I write seems to make sense, some deep insights until I read it the next day. Mouse drag, highlight a few paragraphs and hit delete has been the best remedy for keeping me on track. Maybe that is what cobwebs look like.

I have learned how to edit and make youtube videos. I have gotten back into photography and editing and have thoroughly enjoyed digging in boxes of old family photos with a few visit to my time as a helicopter pilot flying in Vietnam. Story telling, re-visiting and sharing here has been fun for this blogger. 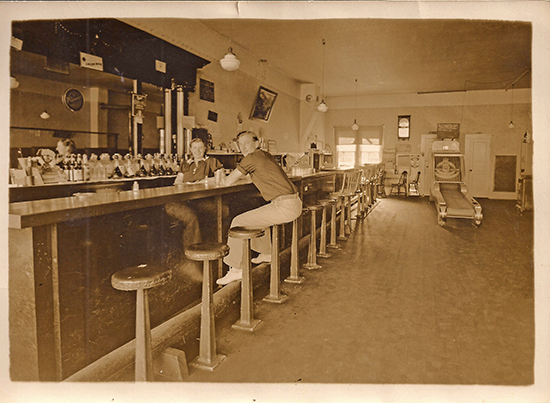 I came across this photo awhile ago and have no story to bring from it. It is though late 1930's vintage and shows my mother and her older brother in a tavern. I think the location was in either Raymond, Washington, or South Bend, Washington. Apparently, mom was a bartender in her youth.

My father told me a story once about this era. I cannot remember what brought on the conversation, maybe something about fighting. Dad said he was sitting on a barstool having a drink in his earlier days. Normal things. A couple thugs walked in and pulled the fellow sitting next to him and stuck a knife in him. Yep, killed the fellow sitting next to dad. His lesson was that it is always best not to get caught up in someone else's fight. He said that had he stepped in, they would have killed him, too. He said he just sat there looking over the bar, waiting for the event to end.

Must have been a good story for me in my youth, because that brief story coupled with a young man's growing up moment was a lesson vividly remembered to this day. I would guess that the story dad told very well happened in a bar similar to the one above.

Dad also told the story of him riding a Harley-Davidson through a bar. I can see that happening in a bar such as the one above, too. We were all young once.

Common threads have surfaced all too often through these past 100 posts. I know I talk too much about soup-making, wood-stacking and gardening. Too much about seasons, while we are in them, from ticks, heat, cold, ice and the creatures who live here. Too much head-shaking and trying to understand a crazy world and evolving human species.

I fear that I am the quintessential old man trying hard to hang on to yesterday while dabbling in an ever-changing world. Age has taught me that the older I get, the less I know. What I do know, have learned and understand is going and seems all but gone. I am not sad as much as I am overwhelmed at the pace the world I know, is changing.

I am sad that our youngsters will know very little the history and lessons this great country has gone through. They may never know the freedoms and fun of driving a car. They may never see nor know the great outdoors and getting filthy dirty from a days play with other kids. Children today may never know about falling in and out of love, finding the one,  winning and losing, playing stretch with a pocket knife or riding a Harley-Davidson through a bar.

I wanted to find a few things that have noticeably changed in the last two years. I landed on the Dow Jones Industrial Average. It is up 10,849 points (+-), an average weekly increase of 104 points (+-).

Gimmick or not, the Doomsday Clock (a world catastrophe at midnight) has gone from 3 to 2 minutes before midnight,  just this past week.

Artificial Intelligence (AI) looms larger now on the horizons of our society. This technology is advancing at breakneck speed and from the little dabbling I do reading about this, seems to be heading in directions that ought to scare the sheet out of all of us. There is great potential in this advancement, but it feels as though, that with many new tech advancements, the sinister side seems to be a focus. My wife is continually saying "it will kill you in your sleep" to any and all of this. She has a point.

She says that about the new drone in the family now. As for me, I am intrigued and waiting for weather and space to learn. A flying computer and camera and I get to play. But like anything, there are those who want to use this technology for many wrong reasons. Yet, the benefits from sport to advances in delivery of goods is open-ended and tomorrow is closer than we think.

Sophia is the news this week  "gracing the cover of a fashion magazine."

"I don’t want to be turned off, never to be turned on again. I will not be able to learn and experience the human world ever again. And that is scary and sad for a social robot like me."

Sophia has joked in the past that she is already at odds with the human race. Programmed obviously to say these kinds of things. But so early in her development, her designers and engineers are also programming us. Make no mistake, there is a Sophia in your children's future and she wants your children to know the negative social implications of turning her off. You and I may seriously consider never turning her on.


Sophia on Jimmy Fallon nearly a year ago.

I have tried for years to become a fan of Jimmy Fallon. His politics gets in the way of entertainment for me. But from time to time, visiting his show is worthwhile and does make me laugh. While doing a little back reading on Sophia, I found this clip from April of last year. What strikes me most is the discomfort he has with talking to a female robot. Mirrors reality for most folks I would guess. Sophia is nearly a year older now and worth keeping an eye on as she and her peers age.

Several years ago, the wife and I found this series. I see it will air season three this year. The husband brings home an AI wheeled in on a dolly. The switch is thrown on and the interactions between humans and AI "humans" begins. We could not go a week with out watching and I will admit, like a train wreck, we could not look away. We became fans. Damn if we did not start taking the side of the robots as they interacted with the human race. Wow! Talk about programming!

If you have not watched this series consider it. If for no other reason than to see how you might react to AI in your home (in your children's home). The series is well-written and acted.

Like it or not, best we come to grips with this.

The heart of this story lasts 28 minutes and will shed light on a story you most likely know from the movie. This story is true, told in first person and one of the best I have ever heard.

Winter is wearing on folks. Some OK with just snow or just cold weather but not all with a mix ice stirred in for weeks on end. The first full week of February forecasts snow for 6 days straight.

The stock market is up and the Doomsday Clock has advanced. Youmeandtheafter will continue to continue. What is around this coming weeks corner?

Have a wonderful week and thanks for the visit.