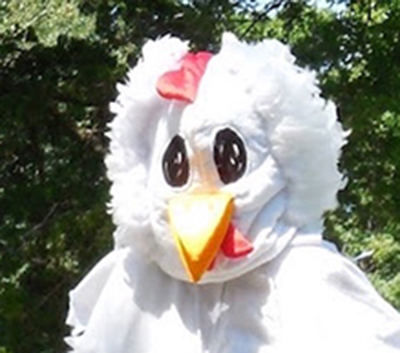 I have some difficulty falling asleep at night. Even going to bed, droopy-eyed and tired, my mind still clicks on. Maybe in compound low and slowly pondering the most mundane of things. One night this past week, I happened upon wondering how I would go about identifying as a chicken.

Tongue in cheek for sure, but with just a hint of seriousness on the side. I gave time as to how I would go about that. My mind had to be doing something, going somewhere that night, why not here? I could never come up with the how-to and wherefores of accomplishing this. If I could, then I thought I could better understand a small percentage of the population that deals with trans-racial, trans-gender or other "trans" digressions / actor or actress / species identifying phenomenon. But I cannot/could not and I tried.

I considered telling the wife that next morning, I wanted to have a talk about self identifying as a chicken. I knew she would be supportive, as she always is and still love me through my change.

Knowing her, she would be on board and help me along to my awakening. She might  take my morning cup of coffee with vanilla flavoring and pour it in the sink all the while explaining that chickens do not drink morning coffee. She might ask that now that I am a chicken in a 72 year-old man body, will I still like chicken soup, scrambled eggs or Chicken Pot Pie?  She would ask how I would explain to my son that his father now identified as a chicken? How would I, with a serious face, explain to other friends? That would be a problem I could see.

I thought she might suggest that I will have to move outside that day, into the wood shed, as she will not be able to deal with chicken s**t and other dirty chicken lifestyles in the house.  I would explain that it would be very easy to just put "CHICKENS" on the door of the small bathroom in the hallway and that would be my bathroom; problem solved. She would agree, get out a card board box lid, write on it and tape it on the bathroom door for me to see. I would walk to the door to see "WOMEN" on the sign so that I might better fully grasp my plight.

Thinking of going chicken worked one wonder that night for I did not remember falling asleep and woke up well rested and refreshed.  I never did cross the bridge to self identifying as anything other than man.

I've gone one step further to see if there was anything I could seriously identify with and to the very best of my ability, there were none. A Norwegian / Russian / Lithuanian man was all I could come up; man being the easiest and most prominent component.

Then a smile came over my face as my chickening bought back an old radio show hero memory, Chicken Man, the White Winged Weekend Warrior. How could I not remind you of Chicken Man or introduce new YMATA readers to him? He is a legend and one of my favorite superheroes.

Yes, you have time to listen to the first four episodes. Chicken Man has a way of growing on you as he should.

There is never a better time in our history than now to bring back Chicken Man to fight crime and help us through the difficult times we live in. "Come back Chicken Man; come back, the world needs you."

Three years ago Sheldon Cooper was disappointed that he would not live long enough for the singularity when man and machine will meld together. Her and I laughed for the Sheldon Cooper's character is a most unique man with most unique perspectives.

I remembered this episode and vaguely thinking that if any of this is possible that I would not see it in my life time. I still have ten years more most likely, twenty at the outside, unless some unforeseen event. I figured I would be past these years before singularity happens.

These days now, I am thinking Sheldon and I just may be around to witness this unavoidable event.

For all that is going on in this world, I find studying, pondering and blogging about AI, Robots and The Singularity fun mind time. There is no doubt it is coming and that all the hoopla to avoid, control or have human discussion for proper channeling and controlling the advancing AI technology is blowing smoke where the sun don't shine. We are doomed. Those far-out futuristic movies, maybe not so much. I fear it is already too late and the chicken is out of the bag!!

HUMANS is a recent two-season TV series. Her and I binged season 1 and then watched season 2 over the winter. "...the series explores the themes of artificial intelligence and robotics, focusing on the social, cultural, and psychological impact of the invention of anthropomorphic robots called "synths". (wikipedia)

It is well-written and acted by new talented actors that we have not seen before (refreshing in of itself). If you have not watched this series and are interested, make sure you watch from the first episode. I do not think you will be disappointed given the current bottom feeding of most all TV programing.

There is a story floating on the net this past week about one of the automatic floor vacuum machines getting into some dog poo and then running with it. I found the story, skimmed the article and that was enough for me. There was even a photo of the round vacuum cleaner gooey mess to help complete the story.

I took a different slant on this technological mishap.  I doubt that the engineers sitting around a table talking design, function, marketing, problem solving and the great future of such an invention ever gave thought to the "what ifs" of the vacuum getting into a situation like this. They took their assignments and returned to the team project build or individual computer design model work. But I doubt this new age tool was never run through the dog s**t design scenario.

Ask yourself next time you see great advances in science, for the betterment of mankind if the designers / engineers and builders have run the design and prototyping through unforeseen events in the products work environment? We might ask these new inventors if their design has passed "the dog s**t" test?

Give some thought to walking open town streets and roads while attending farmer's markets these coming seasons. Sadly, they are proving to be easy target-rich environments.

Have a wonderful week, stay alert and give into treating yourself to something special this week!!