Called the family pilot and told her to put the Lear back in the hanger yesterday morning and to take the Easter weekend off. I also requested she cancel our attendance at Easter Brunch in Key Largo today and any other get togethers connected to our prior travel plans this Easter weekend.

My better half has come down with a case of pneumonia. Took her to the doctor Friday to get checked over and sure enough the gal is walking sick. She tells me that she feels that she has been in a constant prize fight this weekend and from the looks of her yesterday morning, the score cards were not favoring her. It was the far off stare while sitting at the breakfast table that is tell tale of her condition.

Her breathing has improved and the horse pills she is taking apparently kills anything within a mile of her. I picked up a couple quarts of yogurt with live cultures yesterday to help keep some bugs alive in her for digestion. That is as good as my medical degree can explain live cultures in yogurt. Surprisingly Vanilla Bean yogurt tastes like an accompanying dessert with breakfast and dinner now. I took to eating a few small helpings with her out of pneumonia support. Who knew that yogurt tasted so damn good.

I came to the realization that the only family member living here that is not medicated, is the cat. And is not for the trying to get her on some. She is a semi wild barn cat and I cannot catch her. It has been over two years since I last tried to catch her and it is so traumatizing for all of us, I've given in.  It takes a full month, after a cat catching attempt, for all of to return to normal routines while in the same vicinity of each other. 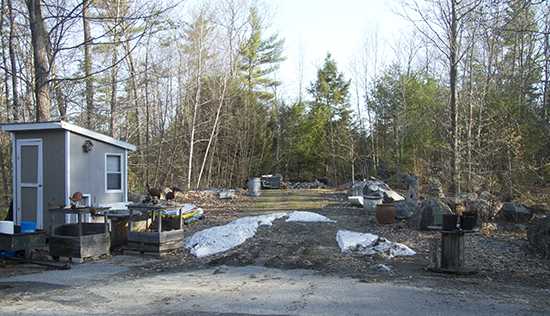 Snow all but melted officially this weekend. Just the back road folks who have a small pile here and there. The highway and town drives show spring now. Temperatures this weekend in the seventies and low eighties and hint of summer coming. Gets us talking of what to plant in gardens and lots of yard cleaning. We have an official list on the kitchen table now of some priorities. We need more staff.

Worldly stuff: I read a few stories now where the gas attack in Syria was a false flag; it was fake; it never happened; why would any leader gas their own people; and so forth. Wag The Dog me thinks. I watched this movie years and years ago and found it distantly entertaining. Watched it again a few months ago and it scared the hell out of me.

Son called a few days ago to ask if I was watching the news. I said no and he said that we had just dropped a bomb (quickly I finished his sentence thinking North Korea) on ISIS; a MOAB. Taking it to the tunnel systems at $314 million; oops not now, the cost is now down to $170,000 per unit according to my recent query of MOAB costs. Who knows?

But I, like you, am concerned of NK and all the talk exchange of nuclear war as if we were trying to decide between a Big Mac or a Quarter Pounder.  Nonchalant worldly conversations between medical pill cure commercials.

By the way, do you have your Potassium Iodide Tablets for you and all members of your family yet? Do you have them in your Bug out bags? Have you read the when's, where's, do's and dont's of taking these tablets? FYI, these tablets disappeared for months after Fukushima. "What's in your wallet"? or "Don't leave home with out it." You may very well regret not getting these ordered today!!

More Stuff:  I am joyed at learning of the new Russian Robot that can fire pistols using two hands.  “The robot of the F.E.D.O.R. platform showed skills of firing using both arms. Currently the work on fine motor skills and decision algorithms is underway,”

Thank goodness that they are working on the decision algorithms. All the design work showing an armed robot. I was worried there for just a moment. Thought robots might best be designed by man to help the human race, not extinguish it. Best we start changing current gun instructions from "two center mass" to "a full magazine into the CPU"!! Change ammunition purchases from FMJ or Personal Protection to Armour Piercing. Maybe best to add a M82A1,  Gepard M1 or M107A1 to our gun belts if we are this close to the "Aluminum's" roaming at will with fine motor skills and new algorithms.

And if fake news along with a most crazy world, the media is now but a misunderstood translation or bold print headline from starting WWIII. If a news headline can be the casual factor for a country go to war, then we are even deeper than I can imagine. From Zero Hedge  Bloomberg posts wrong headline regarding NK missle launch. Yep, just more fake news and all to have bragging rights on being first with a story. Even if the story headline is wrong and nudges us closer to pushing buttons. Not like the world is a little eye winky enough as it is.

Lets wait 24-48 hours on any news headline. Seems to take that long for the "more" truths to come forth.

And just before posting this morning, I did read where NK did try to launch yesterday, but it blew up on the pad. Could just be a few geeks playing with NK missile systems for entertainment?

Big Bang Theory crew sends signal around the world to switch on a lamp. Funny and scary at the same time.

Back to the home front:

The wife has shown signs of surviving. Has wanting desire for home made Chicken Noodle soup and having a Easter appetite for cow off the bbq grill for dinner tonight. Good signs.

Add a little bit securing of our nests along with crowd avoidance, heads up and that crazy paying attention to our surroundings thing this week!

I wish you laughter this week.