CAN SEE THE END OF WINTER FROM OUR PORCH - - TECHNOLOGY -- STUFF 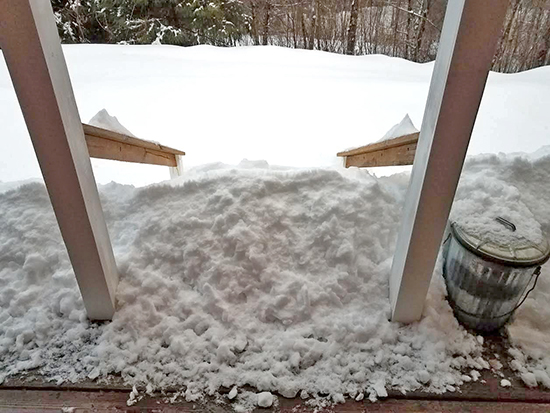 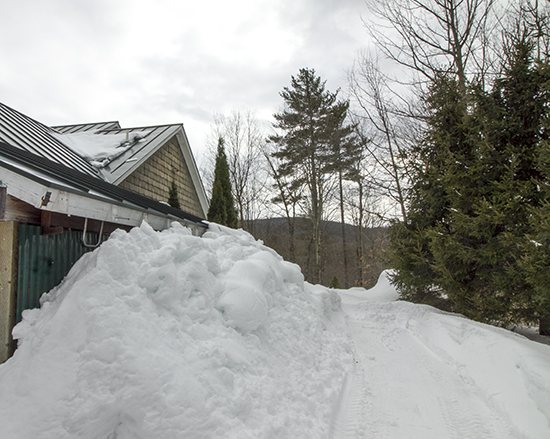 Slow snow melt and slow sliding off of the car port

Daylight savings now; a slight warming trend and most all folks are ready for the official weather change into spring. Our cat is ready to once again venture outside and get back into her cat world. Suffice it to say we are counting the days to where we can say that this winter is over and gone.

Right out of the box here, I want one. For all the wrong, right and to-be-discovered reasons. I just want one.

Did you attach any human emotions to the kicking of the dog? Be honest! How about when it was in another testing phase and flailing around on the floor and its "parents" laughing at it. These dogs will have rights, mark my word. In today's world, you know I am right!!

Can't help but to put a smile on your face. Yea, you watched it twice.


Other sites I have visited on eye-witness reports indicate smoke coming out of the back of the plane, heard rattling noises from the plane and the nose-low attitude. The nose-low attitude is apparently associated with the auto pilot and reported by other pilots.

The smoke and noise from the rear of the plane is another problem and beyond any second-guessing this early in the investigation.

I will be interested to note the findings in these two latest fatal crashes.

For us, "scrungles" is a thing we do to the cat when she climbs out of her winter bed, stretches and approaches her morning meal. We "scrungle" her head rubbing between her ears. From our viewpoint, it is a loving gesture to say hello to the new day and we love you old feral barn cat. We measure out daily acceptance in her cat world by the length of time the cat will endure the scrungle before she pulls away.

Time varies from zero to seconds. Earlier this week I got in a 5 second scrungle and then chose to pull away. Five seconds is an eternity with this cat and a big enough deal that I had to tell my wife when I came back in the house. Funny how things are measured here daily and this morning, a long cat scrungle meant something good. I have long ago given up on any consistency with this cat. Something good will do.

She has been cat house bound for months now. Coming out for meals, doing her business and then back to the secure warmth of her garage winter house. Day after day. If winter has had its way with us, it sure has with the cat.

A few days ago the temperature got into the high 40's and cat wondered out, down the drive and over the snow covered ground into the woods. Her woods. I tried to tell her that a black cat moving on the white snow is not a good idea and that the woods are full of bad actors. She would have nothing of my warnings and ventured out twice that day, meowing back at me over her shoulders. Her body language prevents me from translating what she said.

She has endured another winter. Spring melting has started now and spring starting to be visible off in the distance. Looks like cat is going to get in another year here. 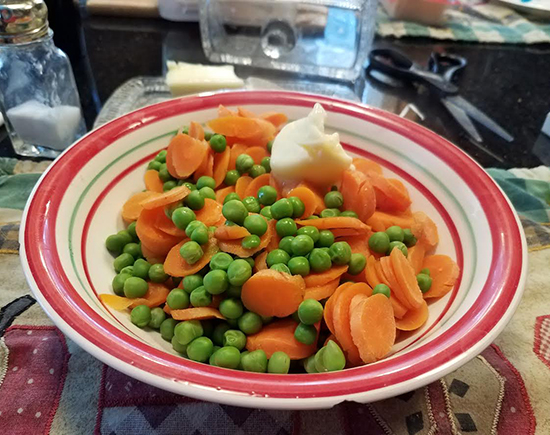 A direct quote from my wife as I set this plate on my dinner mat. She hates peas and carrots. Hates with words and body language!! I, on the other hand, love them cooked, mixed with butter and salt.

For the past few days, nothing sounds good for breakfast, lunch or dinner. This night was the same and prompted this dish for my dinner. She had other leftovers. No sharing, though.

How do the words Kill and Shelter fit together? Regardless, I want one of these,too. From a pup, though.

Yep, I know it is a wild animal. I know there is a lot I do not know. But I still want one. What a magnificent animal.


GET YOUR MIND RIGHT from Raconteur Report

My wife had an eye appointment at SAM's yesterday giving me an hour or so to walk the isles and shop. I tried and spent the last few minutes waiting for her to finish her appointment.

Near the optometrist station was a "Hello Google" smart home hub display. Pushing on the screen activated the video/voice advertisement with "hello Google" offering up a myriad of voice/video example advertisements.

A middle 30s husband, wife and two young daughters stopped by and visited the station. The husband seemed interested as he was the pulling his wife and children to the demonstration. The two daughters bellied up to the display totally taken in and enthralled at the what "hello Google" could do. They could not keep their hands off of the push screen options and wife commented that the price was not bad.  I recognized that was the magic moment for the husband.

For five minutes "hello Google" owned that family. An example for the wife on a days reminder of things to do, a story book for the two daughters and the husband content with it all.

I watched in amazement realizing that my time has come and gone and that it is indeed a brand new world. I told myself that is probably best to let go of my old ways and those of my old America. Maybe best now to "just live in the world." Had I offered up any downsides to them  about bringing that technology into their home, I would have been the crazy old man and "yesterday", they would have been correct. I see things totally different than that wonderful family of 4 did/does.

My S7 phone has an app called Smart Things. I cannot turn it off and at best Force Stop it as it looks for things in its environment to connect/communicate with. We are lucky in our home as all electronics and appliances are pre-home hub days. My poor phone finds nothing to connect to but it is stubborn on a daily basis to keep trying.

Near that Google Home Hub were other devices that could be brought into the home with which to interact over the hub. Weather. Home climate control. Change the color of led lights around the home. A couple others that I have forgotten.

I am not bad-mouthing "hello Google." It is here to stay and embedding deeper in our lives. We, the public, have openly invited it into our lives. I use hello google when driving to voice text, voice call and navigate. I do love the hands off options. "Hello Google; navigate to yadda yadda yadda." The female voice responds, "Ok navigating to yadda yadda yadda, lets go." A map screen and voice on commands make driving simple to places I have never been. I like the technology.

I stopped at a cell phone display while shopping and asked the fellow in charge some questions.

I want (repeat want) a Samsung S9 Notebook. Still expensive by my standards.

I could not for the life of me get my questions answered. He stumbled, his notebook failed to help him and finally I watched him try to add two numbers (prices) with decimals places to failure. He was using pencil and paper. $65.00 plus $38.69 (similar problem).

He seemed nervous. Apologized on his third attempt. I told him that quite often simple errors like this occur from not neatly arranging the numbers in the problem. I learned that in high school and it works wonderfully. I let him go about his business. Long story short, that new phone would triple my current monthly cost for cell phone coverage and usage. His final numbers completed proved I was paying full-book for the phone with a much higher cell fee. I was so hoping for a deal of deals yesterday.

Vermont swears in a goat as mayor; AOC is "just living in the world"; state attacks on the 2nd Amendment Rights are no longer a hidden agenda, but an out right gun grab from law abiding citizens. The After is upon us.

I leave you today with good stuff. Thanks for the visit.

Dogs Rescued from breaking through the ice.