The bride has long-time life friends that vacation/live there several times a year. They are older folks like us and live in an out-of-the-way modest home purchased many years ago when affordability was affordable. Turned out to be a wild investment for them. Shoulda woulda coulda!! That aside, we have been invited down often and have not been able to take off as easily as we can now. The concept of time is much different in our seventies and eighties. Again this invite was recently extended and the wife said yes. So off we drove earlier this past week for a day and half visit with them: “in the Hamptons.”

A 4/5 hour drive/ferry ride(s) trip if traffic is agreeable. It was this time down and back. Measured differently, nearly a full tank of gas one way.

We joked as we left our dear state of NH and crossed over state lines heading south. An immediate notice of wonderful roads and highways instantly turning back several decades to poorly maintained. Other basic infrastructures also neglected. Fully functional yes, but obvious to us that what we are used to in our New Hampshire has spoiled us.

First three hours were driving; in and out of heavy traffic zones near bigger cities, was normal. Arrival at the Cross Sound Ferry in New London, CT was a trip kicker for me. It was our first major destination check point and time to relax having made our ferry schedule an hour ahead of our schedule.

We pulled into line and was on loaded on the ferry with in minutes. The warm weather was text book perfect along with calm seas. Our departure out of the harbor added the finishing touch of a light summer breeze over the top deck. 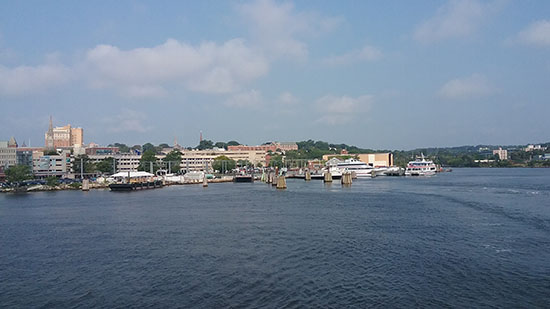 A submarine docked in the ship yards just a few minutes out of the harbor.

We settled into our table and chairs for the hour, twenty minute crossing. I walked up on the top deck while her checked phone messages and readied our home-made lunch. 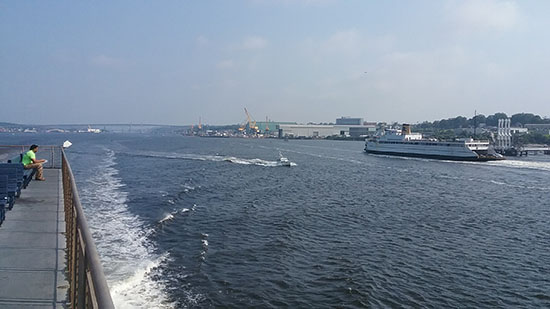 The mouth of the harbor behind us. A noticeable working water way. 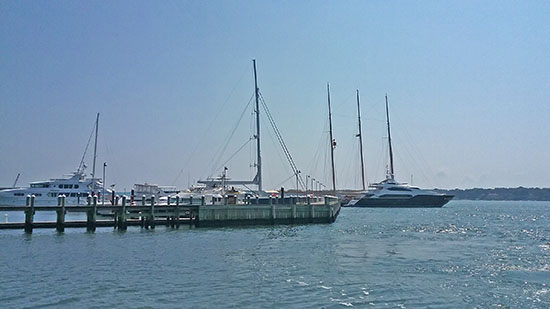 A photo typical of the seascapes around the two ferries to the Hampton's from Orient Point to North Haven and into East Hampton.

I have mentioned times here before about my love for the water, waterways, boats and my time coupled to that environment. I feel a sense of being home, comfort, adventure and being pulled out of the crazy world I too mention here, often. Some abundance of wealth is neatly stamped on so much in the areas our trip covered. It is small sign of just one swath of the whole part of our country.

For me, there is an artist's appreciation of the marrying of man and world.  (Probably cannot say that anymore, huh?  oops) I am guessing that all of what we visited, saw and took in, are mirror images of many other worldly places. I am no artist but the beauty and grandeur of all of this area is never wasted in my appreciation. "Wow" is an understatement and a freedom feeling inside. A good feeling.

Maria and Giovanni are Italian. Yes, Italian. Obviously fluent in their native language and also in English. But their English carries with it an accent that is pure joy to listen to. They often leave the English conversation to clarify a point to each other in Italian. Giovanni would often shake his head yes in understanding what was being said as his wife would explain easier in their native language. And the same would happen from him to his wife, Maria. It was natural conversation and their transitions never missing a beat of the flow of the conversation for all four of us. Very typical husband-wife interactions inside of conversation.

We drove to Montauk near the east end of the island that night for a late dinner. There was a noticeable night culture along the route with the road side eateries packed, parking lots full and folks outside milling around. The arrival at our restaurant was also packed and hectic with restaurant staff moving to and from and guests checking in. We were seated quickly. The seafood was also worth the trip to the end the island that evening.

As busy as it had been along that route earlier, the dinner hour had ended for most folks and the quiet was as noticeable as the earlier hum of he crowds. We walked the circumference the restaurant and local area taking in the evening views.

I did some video taping of several parts of our trip and found that I was photo bombed. I found all of the folks we crossed paths with on this trip were wonderful and friendly. Outwardly pleasant and eager to visit briefly about anything of the moment. Everyone!!

There were the two gals in a small car on one of the small inter-island commuter ferries noticeably laughing and looking at me as I walked back to our car after videoing that portion of the trip. I thought they were laughing at me but did not know why? Come to find out they were a part of the last moments of my video. Both were laughing and waving in the video as I panned through them. I did not see that while I was taping. They were as happy and having as much fun in that moment as anyone for any reason. The video made me laugh out loud and I watched it several times just for the last few moments to see them. I realized they had photo bombed me and added a wonderful human touch.

Looking out over the beach and surf, an older couple offered me a seat on the wooden bench they were on. She explained to me that it was one of the higher seats. Older folks need higher chairs and seats because it is easier for us to sit down and get up. She knew that as she watched my wobbly walking in the sand as I was heading towards them. I also noticed a genuine warmth in her smile and offering. I should have sat down and visited awhile because we had the time. I am sure we would have talks worth mentioning in a weekly blog. I need to better learn a habit of living in the moment. Now that I look back, that was a missed moment. 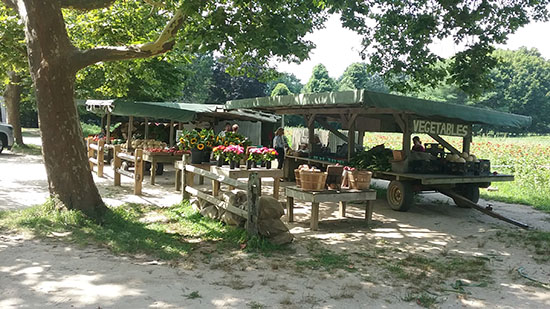 Late morning the second day found us sightseeing some of the large estates and spectacular homes. We also saw some of the farm lands mixed in along the way. The photo above was one of our stops for local fresh fruits and vegetables. The highest of quality, worth every penny and fit well with our want to support local farmers any time we can.

A quick two-day trip and long catch-up visits with very good friends. We got out of the house, enjoyed husband-wife time in vacation mode and I got to be on the water fronts watching the comings and goings of boats and folks. Something to be said for having FUN.

At $7.75 each, a rib eye steak, like the ones pictured below is a great price.

We purchase a cryo-packed boneless rib eye round twice a year like the one pictured below. Sixteen home hand cut steaks saves nearly half the price at the supermarket.

The price of the vacuum pack food saver paid for itself in this packaging alone. We also purchased fresh ground hamburger in bulk and vacuum packed that into three units. Additional saving and quality. Homemade meat loaf promised next week.

Rib eye steaks once a month is always a treat for us. We know exactly what we have and do not have to rely on what happens to be in a meat counter on any given day. 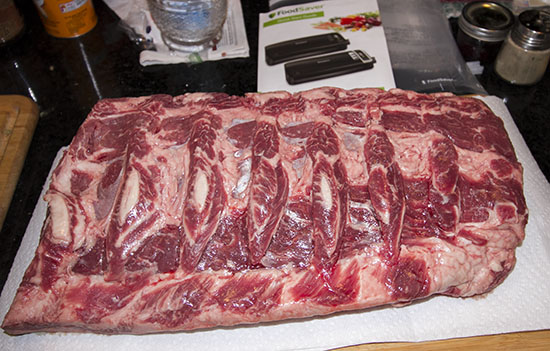 The knife below was handed down from grandfather/grandmother to my parents and continues to home butcher like a pro. Grandfather made this knife in his foundry and ground the initial shape using a hand-turned grinder. The least I can do to help preserve a little family history is slice a few chunks of meat several times a year. The length and stiffness of the blade is perfect for this job and the old knife still holds a great edge. 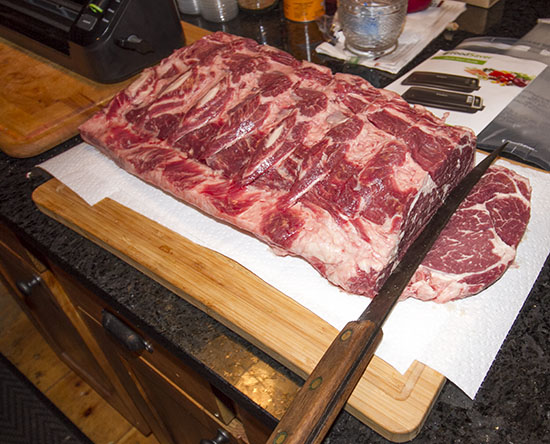 Each steak averaged about an 1 1/4" thick. The last two were thicker, packaged individually and will serve two people easily. 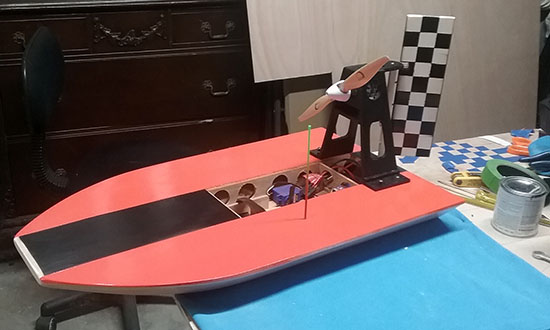 Electric air boat project behind schedule this week. Did get in some painting and work on rudder fit though. Wife's checkerboard suggestion works!!

A few days of cooling temperatures and drizzle this week. Some ferns turning brown and few trees following suit. Fall is around the corner and although my favorite time of the year, I am not ready yet.

A crazy world out there. Get out, have fun and stay alert. Thanks for the visit again this week.
Posted by ymata at 5:16 AM