THE TREBUCHET & A DAY AT THE OFFICE 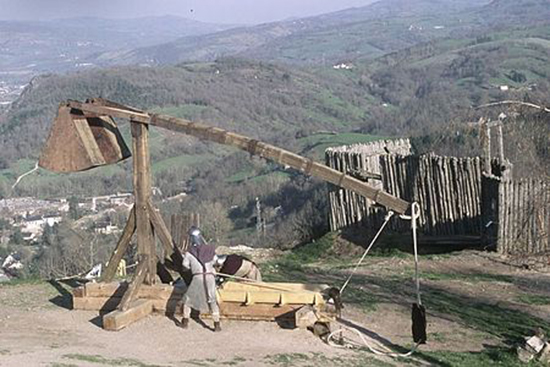 Happened across the above article (great .gif intro) and thought it a great subject for a good blog post this week. I cannot imagine what the folks standing behind "non-penetrable" rock/stone walls of past must have been thinking when several of these massive trebuchets of war were being constructed in the near distance outside their walls.

During the last few years of my teaching career, I was fortunate to teach Project Lead The Way courses here in New England.  This was an up and coming engineering program(s) with strong computer-aided curriculum support. The courses were canned in large part, but during my years, there was still freedom and latitude for the individual instructor to input problem solving and use his/hers teaching experience to enhance the curriculum. Today, I do not think instructors have as much curriculum leeway we had 10-12 years ago. The courses were academically challenging and brought to them the brightest and highly motivated students. And yes, the courses were open to all students.

One of the courses I taught was Introduction to Engineering Design. This course was largely driven using a high-end computer drafting program through which students were introduced to real world computer drafting programs but were also tasked with engaging thinking skills in the design process. Problems were given to grow their computer drafting skills and push their problem solving skill through design.  On any given day I was never ever one step ahead of these kids. They pushed my teaching skills to the limit daily, kept me on my toes and chewed up the curriculum faster than we teachers could dish it out. It was a most wonderful way to wrap up my final teaching years.

In all my 30 plus years of teaching, I never found anything more enjoyable than kids who pushed the outside of the course envelope. Asking questions and my enjoyment at pushing back with another question to see the look in their eyes of a brain at work. And if I ever had a solution to any problem, they had so many more. They came to solutions through different doors in multi dimensional world. So often, I would just sit back and laugh at the what they would bring to the table in personalities and problem solving technique. If they left a day's class befuddled, they came early the next day with solutions.  Wonderful years with exceptional kids.

I think it was my second year teaching PLTW when I was planning their end-of-the-course final exam. I was a strong proponent, through out my teaching career, to put proof-of-learning into a project demanding course curriculum and thinking/building skills. Designing and turning in a set of drawings is one thing, but can you build / prototype it? I quickly learned how the friendly concept of competition fed the learning environment.

So to those classes that year and the next, they were given the trebuchet design problem. Design and build a trebuchet that would fit inside a 2'x2'x2' cube. They would compete for the highest grades through distance and placement of a tossed golf ball. Sounded simple, as most things do at the onset. And it was, till the first student team tested their trebuchet outside the school building. I will get back to this.

Once I decided on this final project and thought it would test the overall curriculum, I set forth working in my shop at night, building one. I would never give such a final project without first building one myself. In doing so, I will make all the mistakes they will and with hopes of being one step ahead of them in the full process. And in all honesty, I was, like they would be, a kid with a new toy.

I had time before the final project was to be given and those week nights and weekends were spent with Trebuchet Prototype 1. All that I learned and the fun I had was much more than I could cover here. And if all of this was not challenging and fun enough of in itself, kicking off that first trebuchet final exam with those kids exceeded all of my expectations. All that I learned in the building of my trebuchet was tested the day I gave out the problem. If they had one question, they had a hundred. I must have been drooling in front of the class as they took flight on this problem to solve.

I unveiled the trebuchet I built. We took it outside and shot it. It worked just fine. I was not worried about students copying my idea or work as they had to work for longest distance and also have the ability to hit a given target area. I just built a trebuchet that threw a golf ball.

The deluge of questions were all answered with:

And of course, their project was to be turned in with a full set of working drawings and a technical write-up of how they incorporated the complete design process.

Materials and hand tools were provided in the classroom. They could bring materials from home. And I did have to fine tune the things I did not see coming. Always, always, always. Their final course grade was an accumulation of everything they accomplished that semester, plus their performance on the final exam. The classroom was made available after school each week also.

I STEPPED ASIDE AND OFF THEY WENT.

The next weeks were spent helping with building problems, solving safety issues, their development of working drawings and working the design process. They ran me ragged. Those who were over zealous to test fire often found a broken trebuchet as a result of poor design and rushing. They were back at ground zero and the whole class learned from their mistakes. Several had very good initial success and that, too, was teachable.

The final exam week arrived, all of their work was due to be turned in and the trebuchets were set to perform and be graded.

We went outside one by one and the tests began. Distance first.

They each had as many attempts as we could get in. They had to make a decision if the distance they threw was a keeper or to be disregarded. They could get three keepers only from which the average was their grade. Their choice as to how they wanted to work that option.

The first throw that first day threw the gold ball across the road, across the sport practice lawn and into the teachers paved parking lot, FULL of cars. Had to be 100' if it was an inch. I held my breath as I knew this final exam could cost me some money now. The golf ball bounced and bounced and completed it journey in the grass lawn on the other side of the parking lot, missing every hood and windshield.  The class held its breath as the golf ball completed its journey and they let out a collective cheer. That was the first and last golf ball we tested that semester.

I asked several of the student to go to the gym and find us some plastic whiffle golf balls. They did and we continued.

There was success and failures. The bell curve was well represented. It was fair and an exceptional learning exercise. Success, failure or problems with their prototypes slightly impacted final course grades. It was designed to be that way. The learning was more important as it always has been. And, the learning was fun and ground that could be built upon.

Another Day at The Office 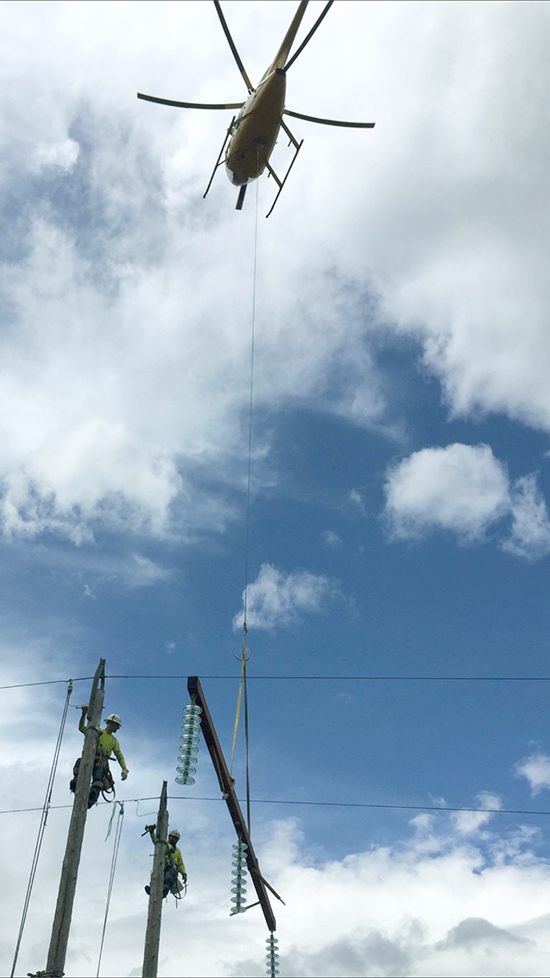 Son in the foreground, waiting for the new cross arm to be lowered in place while he and the other fellow can bolt it to the poles. 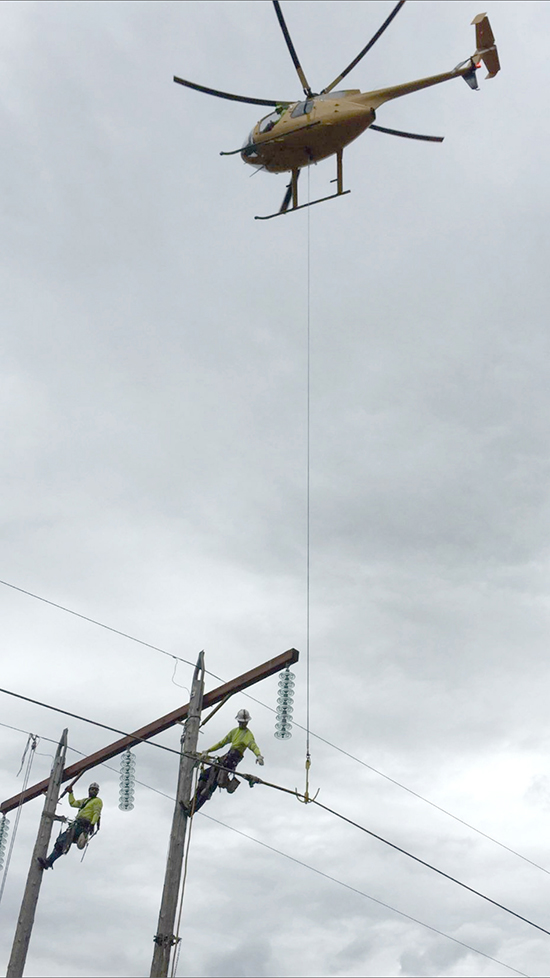 Next they wait for the helicopter to raise the slacked line into place for them to secure to the glass bell insulators.

Yep, a father bragging here a little bit. I do get a kick out of the kid getting a kick out of this kind of work. These lineman have their S*** together, along with a talented helicopter pilot, to make all of this seem so easy.


Have a wonderful week.