"...and some of those Fokkers were flying Messerschmidt's!"  POP used to love saying this. Made him laugh. Today her and I find ourselves saying this, only faster. We make each other laugh.

Not allowed to prepare for Nuclear War!!

I sit here this morning just shaking my head. 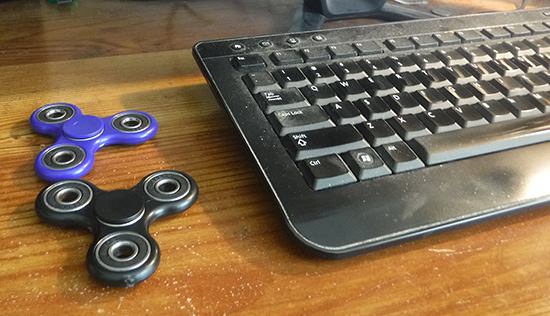 Her went to the big town last week to run a few errands. She always asks if there is anything we need or that if there is something she can pick up for me. I said yes, "A Fidget." The major shopping center just said they have a shipment in now. She gives me the look. I explain that it is for my few BLOG followers. I want to write about it. I told to get me two if she can do that for under $20.

Her asked what a Fidget is. I said it is what you do at the computer when you write. "You fidget." I continued; "You move the mouse in a circular motion causing the arrow on the screen to paint circles, or squiggles or define some hap hazard pattern. You are fidgeting...like bouncing your leg when we sit and visit over morning coffee at the kitchen table." Someone has built a device called a Fidget for fiddling with. That being the scientific description here.

I came across this toy several weeks ago. It was interwoven with the idea of needing something to fidget with while working at a desk. Keeping hands and mind occupied together while working, whatever working was looking like.

The toy spins, has bearings and hooked me. For some reason I found I wanted/needed one and put that on the weeks shopping list. Come to find out all the big chains in middle New England were sold out. Cannot keep them on the shelves and in fact, the toy never gets to the shelves and are kept behind one of the counters in Wally World for example. Whaaaaaaaaaaaaaaaaaat??

Her noticed the chain store just got in a shipment and I tasked her with getting me one or two while shopping there that day. She had to ask several folks, found the secret counter only to find only 3 left in the store. She purchased two and received two "atta girls" and home made chili dogs for lunch.

Some research has revealed that these spinning toys have been around quite awhile but for some reason have taken off only recently in the toy world. Could be a half billion dollar business when all said and done.

So why? Well, why not? Hard to play with here typing though. They do spin quite awhile once spun up. Fun to handle, flip, spin but have run into a wall of boredom after just a couple days. Right now, these two toys are sitting next to my key board waiting, like the dog, for attention. All I need to do is just put one in motion, and then back to work. It makes the lowest of humming sound as it winds down and then again needs attention.  But it has bearings, spins, creates motion and comes alive. I am indeed in need of help. Indeed!!


A little tongue in cheek when I first wrote about Fidgets. Given the crazy world we live in how could a blog like this be anything more than an old man giving way to an earlier stage of development. Whhheeelllllllll!

Daughter swallows part of a Fidget.

I am reminded of Cracker Jacks.

This was a wonderful snack in the growing up days. Carmel popcorn, mixed with peanuts and a prize. Maybe a spinning top, a special decoder ring, whistles, jacks, and the like. Never in my youth did it occur to me to eat the toy. We would eat around it, dump the candy on a surface or in the palm of our hands and sort out the toy. We played with the toys and ate the Cracker Jacks.

Cracker Jacks today are not the Cracker Jacks of yesteryear. No prizes any more and no wonder. But there was a time.

I broke my New Year's resolution by going to the yellow restaurants and order their famous fries along with a Frork. The fries used to be famous with all the salt and flavor. Not so much any more. Fries are ok, but no longer a one of a kind food snack. Regardless, I failed at my resolution but I did it for you. Yep, you are to blame. That what we do now you know, we always blame others for our problems or poor decision making.

Her and I received our small order of fries, but no Frork. Apparently the Frork has not yet arrived here in Middle New England. What a let down. I had big plans with over salted french fries, three of them stuck in the Frork and then slathered in too much ketchup. All of this happening w/o the need for a half dozen napkins to clean off red finger tips.  It was to be a test and I was going to let you in on all of my insights. Maybe next blog.

Will we see stories of kids eating the french fries, ketchup AND the Frork?

I read last week of "Avocado Hand" sending folks to the hospital. Bing or Goggle that for stories. Apparently, a bigger problem than one might think.

I watched Jaques Pepin do this awhile back. If memory serves me right, he ran a small sharp knife around the avocado cutting down to the seed. Then gave a simple turn of the two half's leaving one with the seed inside. Holding this one in the palm of this hand, he used a larger knife to wack down once hitting the center of the seed, sticking the sharp knife in the seed. A simple turn of the knife removed the seed. Somewhere within that procedure, folks are "screwing the pooch."

I have cut myself over the course of this life a few times. Mostly small cuts where a little soap, water and bandaid sufficed. There were also a few instances where I had to wrap the hand and go to the emergency room. I have cut my fingers/hands seriously, a few times, to learn that the worse was still yet to come. That being the Novocaine needle inserted into the soft tissue between the fingers.

Watching Jacques Pepin do the avocado seed removal procedure alerted me not to do that. Learning from past experiences thinking that what ever it was, it was not necessarily always as easy as the other guy demonstrated it be. Both her and I remove avocado seeds the messy way. Very safe, but messy. Half the avacado looks good enough to publish, the other half not so much.

1.75 of Ground Chuck (no substitutes- ground chuck will say ground chuck on the label)--break apart in a large bowl with a fork
Add coarse sea salt and ground black pepper.
Add one egg.
Add 3/4 sleeve of hand-crushed Ritz Crackers
One turn around the bowl of light ream, about a 1/4 cup
Add 1/2 finely chopped white onion
NO!!---do not add anything else.

Mix by hand, turning, smushing, turning and when it appears mixed, plop it in a large glass meat loaf pan. Do not over mix. Push down the edges a half inch or so. Bake at 375, in the middle of oven for 90 minutes. Of course, you did grease the meat loaf pan, right? I use finger and soft butter method.

Draining out all the liquid will dry out the meat loaf. I usually use a spatula to cut slices and then let the slices drain some before plating. Drain most all the grease out when putting away leftover meat loaf.

Results is excellent meat loaf. Adding Ritz Crackers is one of the secrets. (Use them next time in your meatballs) The other is good ground chuck. I am a fan of coarse ground sea salt and always turns of ground black pepper.

Make these potatoes. I used 4 Yukon Gold potatoes and finger/soft butter for greasing the muffin pans. Followed the video and recipe. The potatoes went in with the meat loaf when an hour was left on the cook. This potato recipe will go great with many meals.

Practice safety this week. Seek smiles and some laughter. Look forward to tomorrow and plant something.