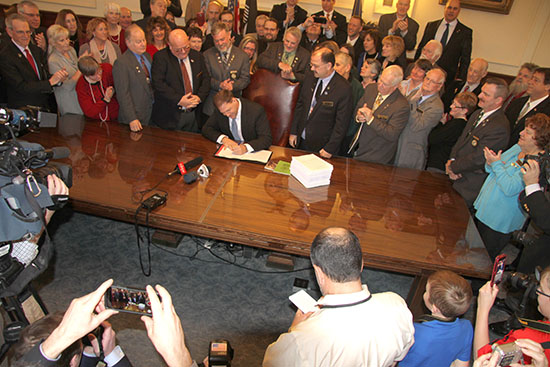 Many members of The Women's Defense League of New Hampshire were in attendance wearing their "assault" pearls and in support of the bill. They were a key group working the past three-year battle to get this bill into law in the Live Free or Die state. The governor campaigned on this issue and followed through by signing the bill when it came to his desk. The WDL of NH were also key players in defeating every bad gun bill brought to the legislature during the same past three years.

Wife has told me that this year's "gun fight" in the legislature is over. But, like the rest of the country, this state is also split down the middle on gun issues. The divide is wide and the battle will most likely never be over. But law abiding citizens won a big one this year. And it was good!! 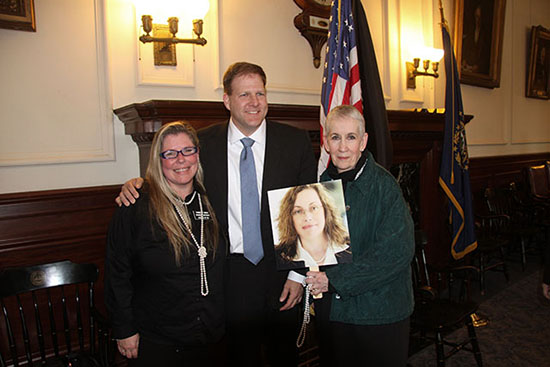 Women's Defense League of NH members with Governor Chris Sununu after signing SB 12 into law. (The gal in the photo was out of town)

In a nut shell:

The 2017 bill:
Makes licenses to carry a concealed loaded pistol or revolver optional by law-abiding NH citizens so they may fully enjoy reciprocity with other states;
It replaces the vague and discriminatory term "suitable" with "not prohibited by state or federal law" as the qualifier for local law enforcement in granting licenses
It returns into law the term of licenses from 4 to 5 years
It sets in statute the application form to be used.

Back to the range this week as winter offers up teaser days of blue skies and t-shirt afternoons. Worked on safety, pistol skill sets and  accuracy. Also tried out a new Walther PK380 pistol; review below.

It seems to me these days that many gun reviews and gun talk border on doctoral theses in length and attempted scopes. Same with folks talking prepping. So, I will do my best here to avoid sounding like I know more than any of you and over-explaining.

The wife and I have have the privilege of working with new shooters. We are licensed instructors and strive to teach safety first and foremost. Secondly, we want our students on target with as many reps as we can get in during a class session. We stand next to each student throughout the course offering help and instruction as required. We are privy to honest gun discussions that our students would likely never engage in during the course of a "normal" day. We can boast that at the end of our lessons, students leave with a healthy and realistic experience shooting pistols. All request another opportunity to return to the range to continue the learning.

We are often surprised that many of our students bring to the range an actual  fear of guns. I do not want to exaggerate this issue but many freely admit that and stand before us wearing that on their sleeves. They are strong enough to bring that in the open and work with it.  There is no greater satisfaction for an instructor than to help folks overcome the fears and become safe gun users. The open discussions are as important as standing with them as they shoot for the first time.

No matter where you stand on gun issues, if you find yourself in a place where you want to learn for your own personal reasons, I suggest you seek out a good instructor and take a few lessons. The experience will also help you come to grips with a better understanding of guns, safety, do's and don'ts, and the gun debate. The gun community, as we know and see it, is always more than willing to help in any way they can with new folks coming into the sport.

The .380 caliber is the next step above a .22 caliber but under the popular 9mm caliber. It is considered by many to be the smallest "useful" handgun caliber used for self defense.

The wife and I have wanted to find a 380 pistol to try but had not found one that fits. A gun has to fit the user. We are now both dealing  with arthritis and my wife has had hand surgery that limits her strength.  She is very comfortable with her .22 for personal use and use in teaching. But her long-time 9 mm handgun has become more than she can rack and comfortably shoot. Even I was looking to downsize from a 9mm carry/target pistol.

We had read a few reviews of the Walther PK .380 and decided to go shopping. Right off the bat, my wife found she could easily rack the slide time after time. As important, the size of the gun fits both of our hands comfortably. The pistol afforded a two-hand hold without worry from our thumbs being too close to the slide. No worries about being cut or injured by the slide action during firing. This is an issue with some semi-automatic pistols. The sight picture was easy to acquire from the stock sights on the pistol. The pistol magazine holds 8 rounds in a single stack + 1 in the chamber. Nine rounds capacity for carry purposes.

I am personally biased to a pistol with a visible hammer and with an easy-to-understand and use safety feature. This pistol has both. 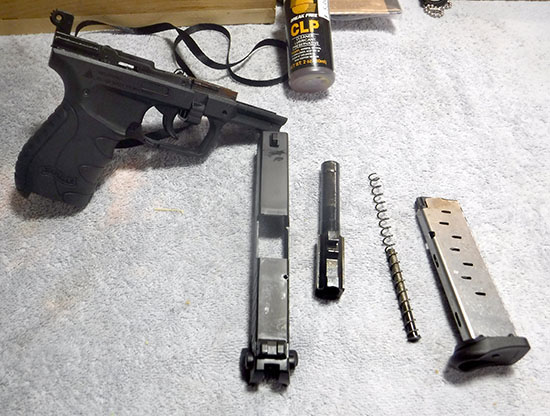 The pistol comes with one magazine.
Larger than most other carry pistols of the same caliber.
Comfortable to hold with user-friendly recoil.
Easy take down for cleaning.
Affordable at around $350.00.

Pistol would not shoot Blazer Brass 95 g. FMJ due to harder primers "I believe."
Pistol ran a whole box of Remington 95 g. FMJ w/o issue.
Pistol also ran two boxes of SIG SAUER 90 g. V-Crown JHP w/o issue.
Single-action trigger pull not as smooth as I would like.
White dots on front and rear sights not as vivid as in the store. May replace.

Wife easily racked and shot 6 magazines with a little soreness in her hands, noting that it would not have stopped her from shooting more.

Bench tested one magazine at a metal target 25' distance with all hits.
Shot both ball and SIG SAUER into a book to see results. 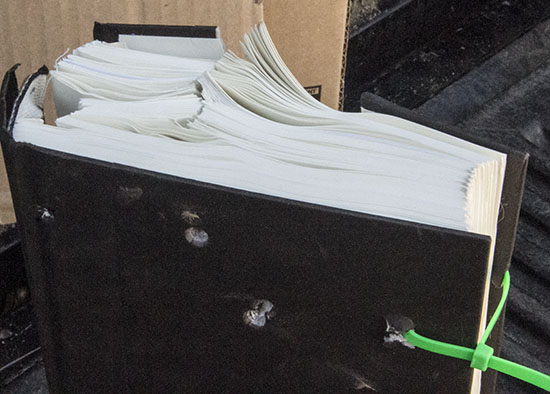 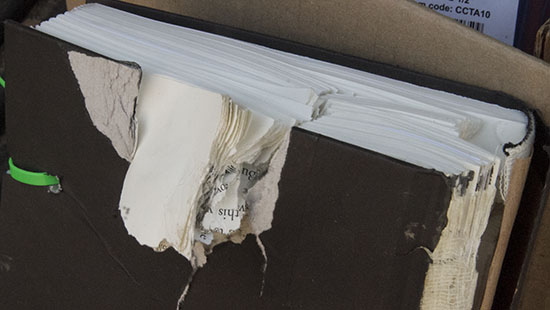 All in all, a good first overall shoot and test for both of us. No regrets with purchase and more time will be spent practicing. The pistol will also be introduced into beginning women's shooting classes as a training pistol for gals to try. It just might well fit that gap between the .22 and the 9mm caliber pistols.

I suppose this will be a repeat of the pie story that I may have posted before. But this was a milestone birthday for the wife and the pie story is worthy of visiting this time of the year. 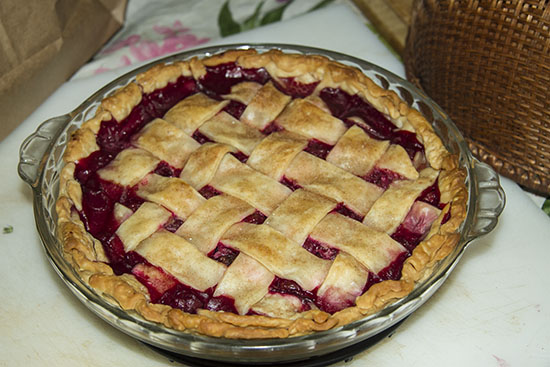 Her mother always made her a cherry pie for her birthday. Mom has been gone now for quite awhile, but as along as I am around, she still gets the homemade Cherry Pie and made with the same amount of love.


Two days before her birthday, I found a "tart" cherry pie in town at our local co-op food outlet store. Sign said tart cherry pie and was made by the gals working the bakery section of the store. I asked a few questions and bought the pie. The gal who baked the pie said it was still warm as she pulled it from the display counter.  I knew then and there it was a good decision.

She arrived home to a birthday test cherry pie and we both dove in. Goodness sake, what a treat. The tartness was perfect and the pie did not last 24 hours.

We went back to the co-op the next day and talked our way into two pounds of the tart cherries the baker used. And on her birthday morning, I made the above pictured tart cherry pie.

She looked upward, pointed to the pie for her mom to see and she filled a small dish each for both of us to enjoy. And it was good, my friends, it was good. She was happy and mom was proud; husband was warm and fuzzy.

A winter week of warm weather and snow melting. Also the start of the mud season as part of season's changing. A few motorcycles can be heard and seen this week, pre-testing their upcoming spring and summer months.