Getting the old year behind and looking at the new year this morning. The newness of winter, snowfall and hibernation has worn off and the next few of months will be seasonal trudging.

I have enjoyed the neutral-ness of the past holiday weeks in the concern, worrying or planning of tomorrows. The snow has been cleared, the wood-box kept full, the cat fat, birds/squirrels fed and the dog healthy. Sand/salt near the garage entrance is a nuisance as usual. But, a must if we want to walk outside with out falling and breaking an elbow. The mess of sand coming in the house, regardless of my practice of shoe changing, will be managed as best as I can.

Binge watching Angie Tribeca; Breaking Bad and People of Earth  this past week has over filled the desire to binge watch anything. The overdosing of cookies, rich meats/crustaceans, assorted vegetables and specialty desserts, has run its course. Wishing everyone happiness and Merry for two weeks; also waning.

EYE ON THE NEWS

I have kept an eye and ear on the news of the days past. I have not had any urges to stock-up on anything. No need for another medium-sized tank, armored car or train car full of chili, beans and rice. Although I see the left is feeling the need. Maybe their turn in the barrel for the next 8-16 years. Just made myself laugh!!

I am going to zero out the barrage from the Vulcan eyebrow “Stepford Commentators” on all species, times  and conditions. No more propped-up, cross-legged,  babble from idyllic perfections. Two weeks to break this habit starts this morning.

I am learning new technology with smart phones and tablets. I have them working and performing old tasks with fresh circuits. They can do so much more than I want or need. I have reached that point of the curve in less than one week. My son tells me of the wonders of being inside the bell curve and that I can do this and I can do that and can “sync” the two like gadgets of information. Well, I cannot “sync” them! Do expect a panoramic photo in a future post though as I think this option in photo taking is cool.

One New Year's Resolution this year.

No more fast food from yellow drive-throughs. No salty french fries, no vanilla milkshakes and double-gooey meat, cheese, sauce and onions. No cardboard nuggets from cardboard boxes. I will add one exception and that is a large chili from Wendy's. Not promoting anything here. Wendy's chili is easy for me to eat. I like the flavor and it never, ever comes back to bite me.

The yellow lunch turns into grease and my poor stomach and system have to deal with it. All of that flavor was temporary and the hold of the grease lasts the rest of the day. So, I am quitting “cold hamburger.”

Watching the wife go through an afternoon/evening of “nugget” food poisoning has cemented this New Year's Resolution too. I will not miss the comedy routine of garbled ordering through an outdoor speaker and the one lane traffic jams. 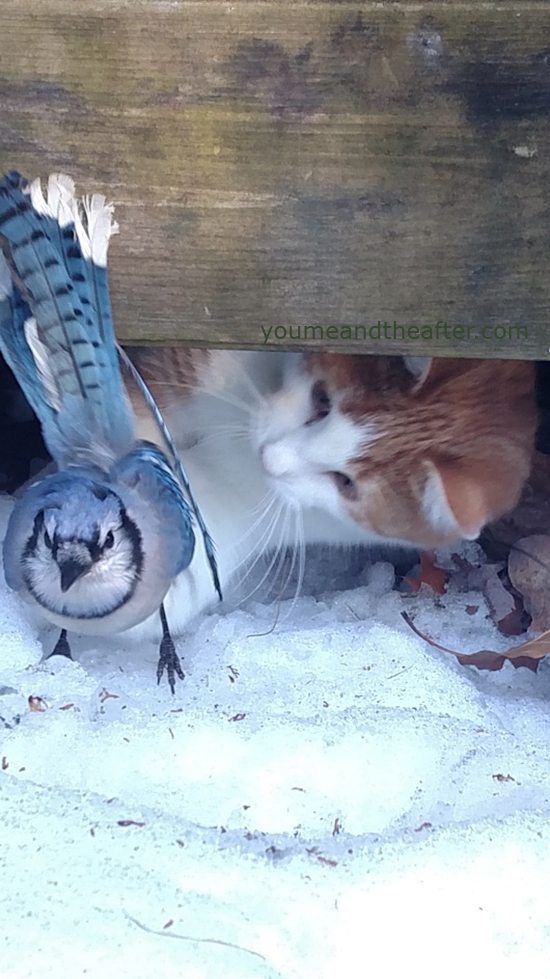 The cat above came to my son's house through family in Vermont. This little kitten has grown and come to learn living from a boy Golden Retriever. The retriever has a routine. Go outside, come back in, walk to the sink and receive a snack. Now the cat goes outside, comes back in and goes to the sink, requesting a snack. Afterwards, it is nap time for both of them in front of the wood stove.

My son took this photo on burst mode from his cell phone.  This is one of his learned options, inside that technology bell curve, with cell phone cameras. Immediate on, with the hand shaking of the phone and then holding his finger on the screen as the camera sets off on burst photo taking. He showed me this photo and just had to ask for permission to share.

Because I Turned Right
from
Sometimes I Talk To Myself

Two cellphone/tablet apps that you may like, maybe not.

The first one is MY RADAR

One hour till the 14 hour forecasted snowfall, with over 12" or a foot, which ever comes first, starts. And to keep beating a dead horse here, her has just completed the fixings of leftover ham bone, soaking in (overnight soaked black beans) and associated seasonings. All in the big red Dutch oven on low. (Mrs. Garcia's Black Bean Soup recipe from Alton Brown). Will be served with warm cornbread.

It is Squirrel/Bird-maggedon at the outside feeders as we speak!

Storm warning of 12" or more of snow, just now down-forecasted to half of that.

As we head into this New Year: