The title here is something I wish I had come up with. But a H/T goes to Tony Schinella.

The bleeding and gushing of emotions have run amuck. I'll bet that you and I have had our emotions bitch-slapped from time to time. It happens deliberately or as a sideline to other goings-on. But it happens. I will also bet that you and I have a few things in our lives that we do not like and that have left an unforgettable taste in our mouths. There are odors that lift our heads and immediately turn us to another compass heading. Not everything in our land is coated with gravy, whipping cream, chocolate sauce or Jack Daniels. Not many things go according to our grand plan. Not everything that happens, we understand. "Adapt, improvise and overcome." Clint Eastwood;  (HeartBreak Ridge)

I'll admit that I am happy the way the elections turned out.  Like with BHO, I will give The Donald his chance. He turned the media, Hollywood, the elites and GOP upside down and I do not think most of them fully understand why and how. I do not believe that The Donald hates America, hates any citizen of age, color nor creed or is hell bent to take down the whole country. So if I can give BHO a chance to prove himself, I can do the same with The Donald. He was fairly elected by the people. That counts, folks. Who was it that said? "Elections have consequences and at the end of the day, I won." Who was that now? Who thought that it was necessary to look down upon the people and throw that in their faces? "What goes around....."

In the past 8 years, I have not been in accordance with much that has been going on inside the Belt Way. BUT, I have not felt compelled to burn an American Flag, move to Canada or Mars, wanted to hurt someone, destroy a business or home, sucker punch a bystander, shoot a fellow man, get on a knee in downtown middle New England in protest or join a large bused in crowd and head to physical confrontation with law enforcement. I have not felt compelled to knock down an old lady, kick a homeless person, toss a puppy or kick a dog. Nor have I crawled inside a closet, put my hands over my face and cried tears. None of these behaviors or like behaviors have entered my mind. Ever!! When thing go bad, suck it up and figure out how to improve on "it." When things go well, do a little dance, a few whoop-whoops and enjoy the victory. God knows middle America could use a victory after an eight-year losing season.

I started this blog to allow me to vent some and learn more. I have shaken my head from side to side so many times that her comes to my aid with a hot cup of tea with honey and lemon and a gentle neck rub.  But I have been doing a little dancing these past few days and damn if I am not getting a hitch in my get-along.

Timing: Her just saw posts for demonstrations in our little corner of the world this weekend. She responded by asking anyone to please pick her up a large LED wide screen TV while they were at it.

I get that if I can blame someone else, then I am an instant victim, can justify my outcry and in no way be held accountable for my actions. I get this. Don't like it, but get it.

The Donald has a fight on his hands. Good, bad or indifferent, the man has a fight on his hands. He is willing to step into the ring, take a stand, take the heat and calls to assassinate him, take the beatings and continue to work the problems. This is my point of view. BHO stood before this nation and said that he was going to fundamentally change this country through his presidency. That man has succeeded on all accounts. Give him credit for that.

You have peeked your head around and into this blog again. We made it through the election week. We have come out the other side here in The After, elections 2016. A good friend on the left coast keeps asking when all of this craziness will end. No photos of Hillary the past three days!! That is a start.

Last thought on all of this today. Years ago, someone explained and showed this to me. "Let it go." "Just let it go." This is a physical process.

So, work with me here. Take a chance. Give it a try.

What are you carrying today? What is stuck in your craw that continues to eat at you? Not a life changing event out of your hands, but a little thing. Let's say the doctor just told you that you can never smoke a cigarette again. If you do, it will soon kill you. My Dad received this very message. Smoked all his life and was told to quit or die. Dad quit. Never ever smoked again, but kept spending the money he would have spent on cigarettes. Put the money away and then used the savings to buy a new car. Dad was a smart guy. Took on a problem with a twisted solution. He always said he would give a thousand dollars for a cigarette, but would not smoke it for a million.

Face what it is that is eating you. State it to yourself in simple terms.

Walk outside, go into the hallway; go somewhere different from where you are now. Maybe outside, in front of God and everyone else. Raise a clenched fist to the sky and then, holding your arm and hand out stretched, slowly release and fully open your hand. Let it go. This a moment you must fully take to heart. Standing there now, a small sigh, a breath and get on with living. If anyone asks, tell them you are "letting it go." 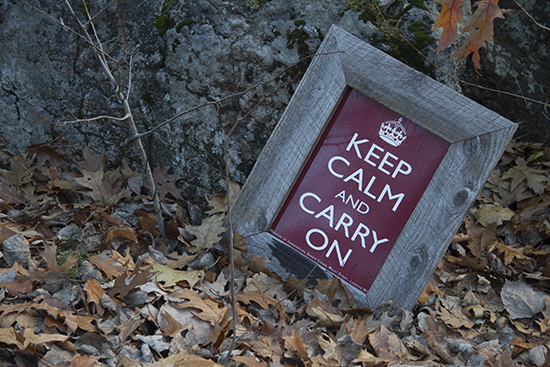