Not reinventing the wheel today with these notes on hardtack - the information on the net is extensive, how to make, eat and the history behind this biscuit.  But I was curious. As always, you are going to do your homework.

I followed a basic recipe, just water and flour. Worked the dough, adding a little bit more water as needed to get it right mix and rolled it with a rolling pin. I was actually surprised at how easy all of that went. A little flour sprinkled on the cutting board helped just like in bread-making.

I used a wine glass for round biscuits and the bride found a square plastic container to cut hers out. We used the larger end of a chop stick to divot the biscuits. I rolled the first batch to be a little less than a 1/4” and baked on a pizza stone as per instructions; 30 minutes each side at 350 degrees. 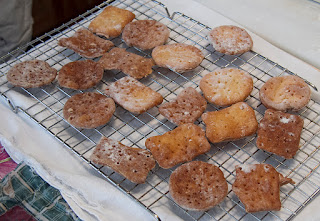 After they cooled and dried, proof was in the biscuit that I most likely could pound nails with them. I could not snap the thicker ones in half. Here is where the heel or pommel of your hunting knife comes in handy to pound these biscuits into smaller pieces

I soaked one in morning coffee for 15 minutes and found it eatable but with significant crunch. For lunch today, I simmered water and won-ton soup base in a small pan with one of the thicker biscuits added. Twenty-five minutes later, the biscuit was eatable, but again with notable crunch. The won-ton soup base helped with the flavor, but the flavor of each biscuits was just fine on their own after soaking. I will break one up into smaller bits using the tractor and see how they soak then.

These biscuits look like crispy cookies out of the oven and very inviting. I kept wanting to pick one up and crunch into it. I did not, of course, but if you make these, a warning sign should be put on the cooling rack --- DO NOT EAT, WILL BREAK A TOOTH --- NEEDS TO BE SOAKED IN COFFEE, SOUP OR PLAIN WATER!!

I made a second batch this afternoon. Rolled them thicker and cut them a little larger. They do shrink. Still as hard as a baseball bat, but more to the individual biscuit per serving size.

Right now, I am making these for learning and a little fun. The ones I have made are stored in jars and will be added to car bug-out bags when fall turns to winter. I would throw these into my pockets in zip-lock bags, understanding they can only be eaten after being soaked for awhile. They are somewhat bulky, but light in weight.Winter BOB's have plenty of coffee and broths in the mix.

This winter will again be full of soups, stews and sauces here at home. I will add one of these biscuits for continued trial. Not that I want to improve the taste, just to improve knowledge of using them in meals.

I mentioned to the bride this morning that everything feels still and quiet. Not a headline out there that is not re-regurgitated. I am numb to all the “breaking stories.” Too quiet though!

We watched the 5 gymnastic gals do their routines and earn gold medals. Upbeat. Seems this is what sport is and what champions look like. Well, until the media gets a hold of the story and slams the success and beauty of these women right down the toilet. I think these gals are heroes, have earned everything themselves and well represent women in America and women of the world. These are the kind of people we want to lead us by example, through their hard work and proven success. These are people the world needs now. To the media agenda, not so much!!

Not surprisingly this afternoon, I find out that I am now a plague. Yep, old man in middle America. The plague ranks right up there with another growing enemy. Maybe the older neighborhoods of this great country are but a flight plan away from being sprayed.

We, the plague generation, are spreading. Some of us cannot walk up stairs w/o help or have to propped up in public. Many of us have survived sticking our fingers in light sockets, riding bikes with out helmets, walking to and from school on a daily basis, driving fast cars without using seat belts, shooting arrows straight up over our heads for entertainment, being sent off to war, raising families and varied careers that added value to the USA.

Likely this newly defined "plague generation" will not go quietly into the night and with their boots on.

Keep your eyes out for more stories like this and metaphors for this new outcast and troublesome generation.

CORN
The bride just arrived home with two boxes of fresh corn. She had offered some help to a neighbor organizing and researching information. Was helpful to the neighbor. He offered up some of his corn to say thank you. Bartering? 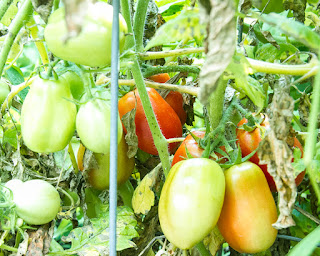 Think you cannot grow a garden? No room, no land or maybe just a balcony. I just counted (roughly) the Roma tomatoes on the smallest plant here in the raised garden and there are over 50 tomatoes. Six plants yields 300 tomatoes this season. Did the same counting method on the 6 cherry tomato buckets & each plant has in excess of 80 tomatoes on them. Yep, that is correct. Four hundred and eighty little tomatoes, give or take.

A balcony can easily yield a hundred tomatoes, some onions, green peppers, herbs and lessons in growing food. Dirt, water and the want to do it. And remember to also invite the bees when you plant. 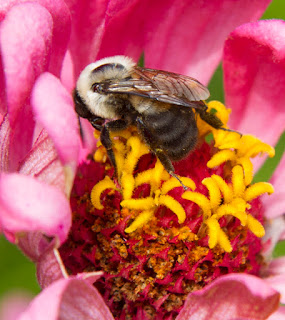 Hot hot here today and tomorrow and just notified her that we have to do a first harvest on tomatoes tomorrow and to give some thought on what to do. She said spaghetti sauce with home grown onions, green peppers, chives, garlic and basil. Her held her hands out in a big round circle indicating a large batch. It looks likes canning this weekend too.

New comments are not allowed.